Home » What Do Militant Muslims Want? Is the Pope in Danger?

What Do Militant Muslims Want? Is the Pope in Danger?

Do you watch television from your easy chair or read the bad news as militant Muslims continue their barbaric rampage across the world killing innocent Christians and Jews?

Do you dignify some of them by calling them ISIS? ISIS is an acronym for the Islamic State of Iraq and Syria. However, they are not a legitimate state in the family of nations and should not be dignify by being called a state.

They are the fruit of modern militant Islam which brazenly showed itself to the world on September 11, 2001. Osama bin Laden deliberately chose that date to avenge the last great defeat of the militant Muslims at Vienna on September 11, 1683.

On September 11, 1683, 15,000 Viennese had been under siege of 140,000 militant Muslims since July 16th. Pope Innocent XI recognized the danger posed by them and called on all the rulers of Central Europe to unite against their common enemy and save Vienna.

As you watch the barbaric scenes of the militant Muslims these days on your television screens or read about them in the bad news, do you cringe in worry, fear and anxiety? Do you feel guilty and helpless to do anything about it? A good start would be for all of us to watch and read less and pray more.

Do you wonder what the militant Muslims want?

9/11 was the opening scene produced by militant Muslims in their planned modern drama to conquer the entire world for Islam. Since 9/11 there have been over 15,000 deadly terrorist attacks carried out by them worldwide.

Ronald Reagan had a great insight to the dangers of militant Muslims. He wrote in his autobiography, “I don’t think you can overstate the importance that the rise of Islamic fundamentalism will have to the rest of the world in the century ahead-especially if, as seems possible, its most fanatical elements get their hands on nuclear and chemical weapons and the means to deliver them against their enemies.”

Just last week, militant Muslims continued their conquests across the world. This is what they did last week:

Militant Muslims from Nigeria continued their killing and kidnapping in their attacks on innocent villages in Nigeria and in neighboring Cameroon. They have caused almost 200,000 people to flee into Niger, Cameroon and Chad.

Militant Muslims launched several attacks across Iraq where they have caused over 1.25 million people to flee their country.

Militant Muslims caused Saudi Arabia, Germany and Italy to close their embassies in Yemen, following the United States and other nations. We have now left Yemen as an open country and a base for militant Muslims to continue their conquests across the world.

Militant Muslims released a video which showed their claimed beheading of 21 Egyptian Christian Coptics on a Libyan beach.

Militant Muslims say that the conquest of Rome is also on their agenda, towards their conquest of the entire world in accordance with their fundamental interpretation of the Koran. 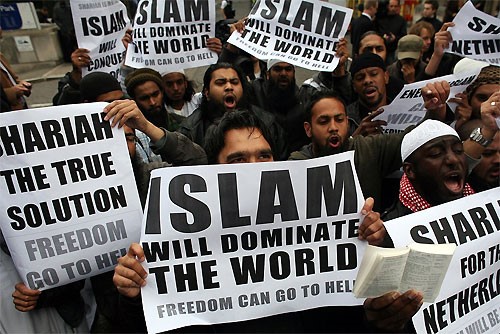 After the mass beheading slaughter of the 21 Egyptian Coptics, a militant Muslim raised his knife and said that they would “conquer Rome.” Security at the Vatican and across Italy was increased this week because of a higher risk of attack by militant Muslims.

The head of the Vatican’s Swiss Guard confirmed additional precautions had been taken to ensure the safety of Pope Francis. “What happened in Paris with the Charlie Hebdo attacks could also happen at the Vatican. We are ready to intervene to ensure Francis is protected,” Christoph Graf told Italian daily Il Giornale.

Militant Muslims believe that the world is headed towards “The Great Battle” to be held at Dabiq, Syria. Dabiq is the Syrian town where Mohammed supposedly predicted that the armies of Islam and “Rome” would meet for the final battle that will precede the end of time and the triumph of Islam. 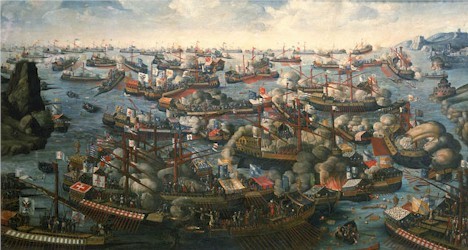 The Venetian Senate wrote to the other States which had taken part in the battle, “It was not generals nor battalions nor arms that brought us victory, but it was Our Lady of the Rosary.”

October 7, the date of the Battle of Lepanto, is now the Feast of Our Lady of the Rosary.

Let us now watch less television, read less bad news and pray more. Let us take up the Rosary and devotion to Our Lady of Guadalupe and implore her to intercede for our fearlessness and hope, for the conversions of the Muslims to the one true God and to bring peace in our time.

Our Lady of Guadalupe told St. Juan Diego, “Listen and let it penetrate your heart, my dear little son, let nothing discourage you, nothing depress you. Let nothing alter your heart or your countenance. Am I not here who am your Mother? Are you not under my shadow and protection? Am I not your fountain of life? Are you not in the folds of my mantle? In the crossing of my arms? What else do you need?”

Militant Muslims believe that they are fighting a cosmic war in which they are the agents of good who may destroy us, the “evil” others, by any inhuman and barbaric means. Our response is to love them and pray for them as Jesus taught us to do.

Let us pray the United States Bishops’ Novena to Our Lady of Guadalupe, being ever mindful of their invocation for day nine: “God of power and mercy, you blessed the Americas at Tepeyac with the presence of the Virgin Mary of Guadalupe. By her prayers enable all people to accept each other as brothers and sisters. Instill justice in our hearts that your peace may reign in the world. We ask this through our Lord Jesus Christ, your Son, who lives and reigns with you in the unity of the Holy Spirit, one God forever and ever.” See the novena here.

Click here to see the source of  Victory at Vienna.

Click here to see the source of Week of Barbarism.

Click here to see the source of Cosmic War.