Home » The Powerful Intercession of a Child

The Powerful Intercession of a Child

I had lunch with my cousin Sharon the other day.

I hadn’t seen her since a family reunion 30 years ago. So we
fast-forwarded our news from then to the present. She is a pro-lifer,
volunteered at a pregnancy care center and is devoted to Our Lady of
Guadalupe. The Missionary Image of Our Lady of Guadalupe visited her
parish. She told me a marvelous, miraculous pro-life family story that I wish to share with you now.

Sharon’s son and his wife, Mary, parented four children who all died one after the other. One was stillborn and the other three were miscarried. You would think that they would have given up in despair for any future hope of parenthood.

We need your support today in order to continue to bring Our Lady’s Hope.

But, we haven’t even raised 20% of our Lenten Appeal. In order to continue our work for the greater glory of God, we must raise $116,000 by Good Friday if we are going to keep these Apostolates active!

Mary finally gave birth to a son, Sean Patrick. But there were complications. His heart was malformed. He needed open-heart surgery and several operations to correct it and to reconnect all the veins and arteries.

Sean Patrick was in the intensive care unit for four and half months. During this entire time, Sharon and Mary watched and waited at his bedside. They courageously and hopefully kept vigil with him 24/7 in alternate shifts. 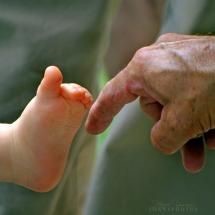 Sean Patrick began to recognize Sharon when she arrived and greeted her with a great big smile with his foot lifted up in the air, expectantly awaiting her tickling.

However, it soon became apparent that Sean Patrick’s last day had come. Despite what his doctors called his “medically inexplicable” survival (we would call this a miracle!), one day Mary and Sharon were unexpectedly asked to leave the intensive care unit.

Reluctantly, Mary and Sharon left the room. At the exit door they bumped into two of Sean Patrick’s nurses who had become quite devoted to him. When these two nurses heard that Mary and Sharon had been ushered out of the intensive care unit, they snuck them back in to say their last goodbyes to Sean Patrick.

Sharon walked straight up to him, looked him in the eye and said,

“Now, Sean Patrick, when you go up to heaven, go straight to the throne, do not stop and talk to anyone on the way. Ask Jesus to send your mother a healthy baby girl soon.”

And if you can believe it, the same two nurses who were so devoted to Sean Patrick also gave birth to healthy babies on the exact same day!

A triple blessing of babies through the intercession of a deceased baby.

Mary went on to have three more healthy children. She is now the mother of nine, the first five of whom died.

In faith and hope, she and her husband trusted God and He rewarded them with four more healthy children.

We hope you will consider a donation to our Lenten appeal. With only 10 days remaining we have 85% of our goal left to raise.

For more information about our appeal and the work
Dan Lynch Apostolates is doing click here.

May God bless you,