Secularist activist Shaun King tweeted on June 22, “The statues of the white European they claim is Jesus should also come down.… All murals and stained glass windows of white Jesus, and his European mother, should come down. They are a gross form of white supremacy. Created as tools of oppression. Racist propaganda. They should all come down.”

In the 5th century, the original Barbarians invaded Rome. They tore down statues and buildings, but replaced nothing.

The Barbarian … will consume what civilization has slowly produced after generations of selection and effort, but he will not be at pains to replace such goods, nor indeed has he a comprehension of the virtue that has brought them into being. Discipline seems to him irrational, on which account he is ever marveling that civilization, should have offended him with priests and soldiers…. In a word, the Barbarian is discoverable everywhere in this, that he cannot make: that he can befog and destroy but that he cannot sustain; and of every Barbarian in the decline or peril of every civilization exactly that has been true.

Now, in the 21st century, the New Barbarians tear down statues, but replace nothing, and call for the further tearing down of statues and images of Jesus and Mary. We cannot tolerate their barbaric violent actions and should no longer sit by and watch them on our TV screens! Jesus asks us not to tear Him down, but to build Him up and to enthrone His Image everywhere for protection. 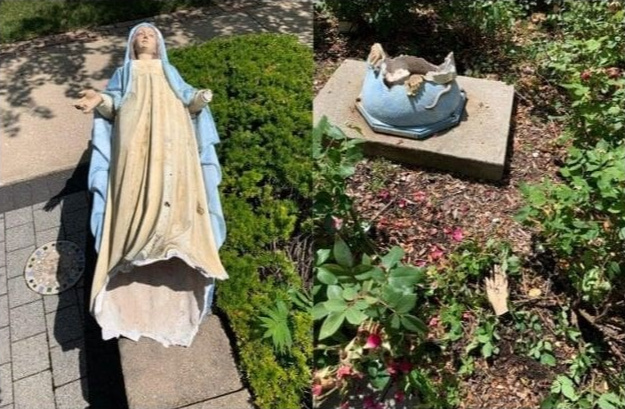 We need to stand up for Jesus and Mary and engage in spiritual warfare against the New Barbarians and the Secularists. We need to practice more prayer and fasting.
Saint Pope John Paul wrote, “Jesus Himself has shown us by His own example that prayer and fasting are the first and most effective weapons against the forces of evil (cf. Mt. 4:1-11). As He taught His disciples, some demons cannot be driven out except in this way (cf. Mk. 9:29)” (Gospel of Life, 100).

Demons can also be driven out by the ritual of exorcism. On June 19, the statue of St. Junipero Serra was torn down by the New Barbarians in San Francisco. Archbishop Salvatore Cordileone visited the site of the sacrilege and performed a ritual exorcism for what he called “an act of sacrilege.” He said, “This is the activity of the evil one who wants to bring down the Church, who wants to bring down all Christian believers. So we offer that prayer and bless this ground with holy water so that God might purify it, sanctify it, that we, in turn, might be sanctified.”

I’ve been feeling great distress and a deep wound in my soul when I see these horrendous acts of blasphemy…and disparaging of the memory of Serra who was such a great hero, such a great defender of the indigenous people of this land. Someone who was very much a part of my life growing up. I grew up very close to the first mission that he founded in San Diego. So it inflicted a very deep wound in my soul. 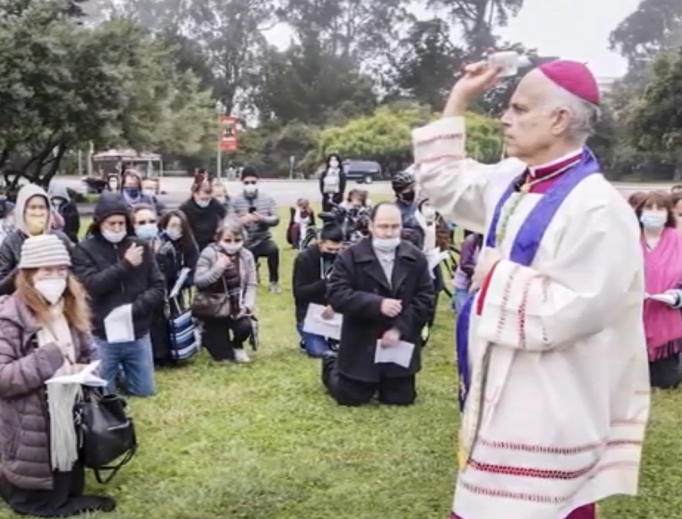 The New Barbarians and the Secularists (those who live as if God does not exist) want to tear our country down and replace it with nothing, except their futile efforts to build a utopian heaven on earth without reference to God and to continue to live their lives as if He does not exist.

They have the revolutionary false hope of peace on earth through their human efforts alone. They want to live as John Lennon wrote in his song Imagine. They want to imagine that there’s no heaven or hell and no religion; to live just for today with all the people living life in peace. However, these dreams of the Secularists are always nightmares that end in chaos and death, as in Russia and China where over 100 million innocent people were killed in the last century with their legacy carried over into today’s Socialism in North Korea, Cuba and Venezuela.

So, what is the remedy? What should we do?

Jesus King of All Nations said, “In these times only one thing will be given as a remedy. I myself am that remedy!” (Journal 159).   “I have told you of the remedy. That of the public practice of my Devotion and veneration of my image. Let as much as can still be done to bring this about be done. Let those who are able enthrone my image in their homes, parishes and dioceses.” (Journal 671).

God is seemingly calling out to us, “You need me!” There is no other leader, or political, legal or monetary solution. Our society is beyond human redemption and only God can help us.

After the terrorist mass killings at the San Bernardino holiday party on December 2, 2015, on the very same day, Jesus King of All Nations revealed a message for us to “Awake! A great catastrophe is about to befall you!”

The following is His message,

“Awake! Lift up your heads my people!  Do you not see the signs all around you?! A great catastrophe is about to befall you!

Let my bishops take up my Devotion of Jesus, King of All Nations, for it has been given as a remedy and a protection in these most dangerous times!

Is it not clear what is taking place? Violence and godlessness increase daily. Hatred and a complete disrespect for life grows wantonly. There is no sense of sin or of the divine throughout the earth! What is about to descend upon mankind is due to his great sinfulness.

I have warned you time and time again but you still refuse to listen and my holy Church does not recognize the urgent need of the approval of my Devotion!

I have told you of the remedy. That of the public practice of my Devotion and veneration of my image. Let as much as can still be done to bring this about be done. Let those who are able enthrone my image in their homes, parishes and dioceses.

You see I AM infinitely merciful and accept a smaller amount than my justice requires. This is the pre-eminence of my divine mercy. It is my greatest divine attribute.

Heed my words my bishops, my prelates and afford your flocks the offered graces of mercy and protection!

Do all that you possibly can!

Do not be afraid of the opinion of man, fear rather displeasing your God!”

In the light of the ongoing violence, murders and the abuse and corruption in the Church and the State, we should remember that Jesus has told us, “Let not your heart be troubled.” (John 14:1). “In this world you will have trouble. But take heart! I have overcome the world.” (John 16:33).
{module_contentholder,47600}