Home » The Beheading of John the Baptist and Innocent Christians

The Beheading of John the Baptist and Innocent Christians

The Beheading of John the Baptist and Innocent Christians


On August 29 we remember the Passion of St. John the Baptist. He
publicly confronted King Herod Antipas and told him that it was not
right for him to live in adultery with Herodias.

The king got
drunk at his birthday party and watched Salome, Herodias’ daughter,
dance lewdly before him. In his passion, he promised to give her
anything that she wanted. She asked her mother what she should ask of
the king and she replied, “The head of John the Baptist on a platter.”
The king granted her wish and beheaded the innocent St. John who died as
a martyr for the truth. 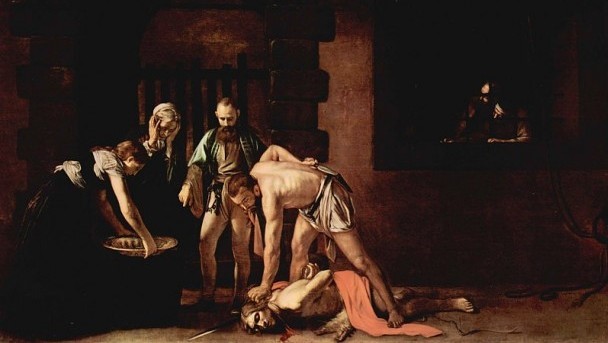 The Beheading of John the Baptist by Caravaggio

Today many are trying to expose the truth
of the barbarity of militant Muslims. They have beheaded many Christian
men, women and children and recently a Catholic journalist who tried to
expose the truth about them.

After a prior kidnapping in 2011, Jim wrote about his experience. “I
prayed [that my mother] would know I was OK. I began to pray the rosary.
It was what my mother and grandmother would have prayed . . . as if in a
conversation with God, rather than silently and alone.”

Before he was beheaded, Jim was unable to write letters to his family because they were confiscated by his jailers.

Instead, he asked another hostage who was about to be released to commit
his letter to memory. When that hostage was freed he dictated the
letter to Jim’s mother.

Jim said in his letter, “I know you are thinking of me and praying for
me. And I am so thankful. I feel you all especially when I pray. I pray
for you to stay strong and to believe. I really feel I can touch you
even in this darkness when I pray.”

After the Islamic State posted the video of Jim’s murder online, his
mother, Diane, wrote, “We implore the kidnappers to spare the lives of
the remaining hostages. Like Jim, they are innocents. They have no
control over American government policy in Iraq, Syria or anywhere in
the world.”

“We thank Jim for all the joy he gave us. He was an extraordinary son, brother, journalist and person.”

Like Jim, let us pray the rosary, in union with St. John the
Baptist and Our Lady of Guadalupe, to end these beheadings and all
killing of the innocents! See our Rosary Package here.

Let us pray with St. John Paul II,
“Holy Virgin of Guadalupe, Queen of Peace! Save the nations and peoples
of this continent. Teach everyone, political leaders and citizens, to
live in true freedom and to act according to the requirements of justice
and respect for human rights, so that peace may thus be established
once and for all.” See his full prayer here.

You could help to bring this peace by hosting a Visitation of the
Missionary Image of Our Lady of Guadalupe and by praying with her Holy Hours for Life, Pace and Protection. Learn how here.