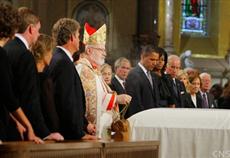 The issues surrounding Ted Kennedy’s funeral are not limited to whether Cardinal O’Malley should have allowed or presided at his public funeral or whether he should have allowed the grand celebration of Kennedy’s supposed legislative accomplishments (without mention of his support for abortion, embryonic killing or same-sex marriage) or even the quasi-canonization by the priest homilist. The central issue is whether sacrilegious Communions were committed by Catholic politicians who publicly support the horrendous sin of abortion.

The following Catholic pro-abortion politicians attended the funeral: Vice President Joe Biden, House Speaker Nancy Pelosi and Senator Chris Dodd. At Communion time the television cameras deliberately turned away from showing who received and instead panned the windows of the church. However, the news reports said that President Obama did not receive the Holy Eucharist. The implication is that the others did.

Canon Law 915 mandates that those who obstinately persevere in manifest grave sin are not to receive the Holy Eucharist. This was interpreted by Pope Benedict XVI, then Cardinal Ratzinger, to mean that when a Catholic politician has consistently campaigned and voted for permissive abortion laws, his Pastor should meet with him, instructing him about the Church’s teaching, informing him that he is not to present himself for Holy Communion until he brings to an end the objective situation of sin, and warning him that he will otherwise be denied the Holy Eucharist.

Cardinal Ratzinger also said that when “these precautionary measures have not had their effect or in which they were not possible,” and the person in question, with obstinate persistence, still presents himself to receive the Holy Eucharist, “the minister of Holy Communion must refuse to distribute it.”

If the pro-abortion Catholic politicians at Mr. Kennedy’s funeral received the Holy Eucharist, perhaps they were never warned by their Pastor or Bishop or by Cardinal O’Malley or any of the celebrating priests that their conduct violated Canon 915. Or, if they were warned and their minster of Communion knew it, than the minister failed under his duty to refuse to distribute the Holy Eucharist to them.

Curiously, the printed program for the funeral liturgy did not contain the usual U.S. Bishop’s statement on the guidelines for receiving the Holy Eucharist. These guidelines are that only Catholics may receive and Catholics who do receive must be property disposed. Moreover, neither presiding Cardinal O’Malley nor any priest gave any oral statement about the guidelines before the distribution of the Holy Eucharist. Giving these Catholic pro-abortion politicians the benefit of the doubt, perhaps they were in total ignorance because no Pastor, priest or Bishop ever warned them as they should have.

Nevertheless, even though they may have never received any warning, still their reception of the Holy Eucharist was objectively unworthy and an objective sacrilege against the Holy Eucharist. This is why the Church in America is spiritually sick and infirm.

Eucharistic sacrilege means to treat the Holy Eucharist unworthily and is a grave sin because in this sacrament the true Body of Christ is made substantially present for us. (Catechism of the Catholic Church No. 2120). St. Paul said, “Whoever eats the bread or drinks the cup of the Lord unworthily sins against the body and blood of the Lord…. That is why many among you are sick and infirm, and why so many are dying. If we were to examine ourselves, we would not be falling under judgment in this way.” (1 Cor. 11, 27-31; Catechism of the Catholic Church No. 1385).

Pope John Paul II in his Apostolic Letter, The Church of the Eucharist, reaffirmed this teaching. He said, “I reaffirm that in the Church there remains in force, now and in the future, the rule by which the Council of Trent gave concrete expression to the Apostle Paul’s stern warning when it affirmed that, in order to receive the Eucharist in a worthily manner, ‘one must first confess one’s sins, when one is aware of mortal sin.’” (No. 36).

It is very doubtful if any of these Catholic pro-abortion politicians first confessed their objective mortal sins of publicly supporting abortion. They never showed any public repentance and they persist in their pubic support of abortion. So to all appearances, their receptions of the Holy Eucharist were knowingly sacrilegious.

But we should not judge from appearances. We can, however, judge their objective actions which were publicly sacrilegious and scandalous whether they know it or not. We should not pass judgment on their state of grace or the lack of it or the subjective and personal guilt of any of them. Rather, we should react to the person’s public unworthiness to receive Holy Communion by ourselves making Holy Communions to repair for sacrilegious Communions.

Bishop St. Ambrose refused the Holy Eucharist to the powerful Emperor Theodosius and thrust him back from the threshold of the Church. He did this because Theodosius had caused seven thousand innocent persons to be slaughtered by his soldiers. Eight months later, Theodosius requested absolution which St Ambrose gave him after he had submitted to the public penance of the Church.

Bishop St. John Chrysostom told his priests, “Though a captain or a governor, nay, even one adorned with the imperial crown, approach [the table of the Lord] unworthily, prevent him; you have greater authority than he . . . Beware lest you excite the Lord to wrath, and give a sword instead of food. And if a new Judas should approach the Communion, prevent him. Fear God, not man. If you fear man, he will treat you with scorn; if you fear God, you will appear venerable even to men.”

However, we cannot reasonably expect any priest or Bishop to act like St Ambrose or to follow the advice of St John Chrysostom in the United States today. No American priest or Bishop has ever refused to distribute the Holy Eucharist to any Catholic pro-abortion politician who presented him or herself to him for reception. They have always publicly received without any public rebuke or public repentance. Unless there is a reformation, they will continue to do so and the Church will suffer from continuing sickness and infirmity because of it.

But it is fruitless to blame priests and Bishops for this. We the faithful should ourselves make reparation for these sacrilegious Communions. Moreover, most Catholics go to Communion every Sunday but very few go to Confession. Many are in the state of mortal sin because of the willful practice of contraception. Many of them are ignorant that this is grave sin because they have not been properly taught by the priests and Bishops. However, many others do know that this practice is gravely sinful and they have no intention of stopping it, or of confessing it and they still receive the Holy Eucharist.

The First Friday Devotion to the Sacred Heart of Jesus is based on a promise made by Him to St. Margaret Mary in France in the 17th century. He said, “I promise you in the excessive Mercy of My Heart that My all-powerful Love will grant to all those who communicate on the First Friday in nine consecutive months the Grace of Final Penitence; they shall not die in My disgrace nor without receiving the Sacraments; My Divine Heart shall be their safe refuge in this last moment.”

The First Saturday Devotion to the Immaculate Heart of Mary is based upon promises made by her to the children of Fatima, Portugal in the 20th century. She said, “I promise to help at the hour of death, with the graces needed for salvation, whoever on the First Saturday of five consecutive months shall Confess and Receive Holy Communion; recite five decades of the Holy Rosary; and keep me company for fifteen minutes while meditating on the fifteen mysteries of the Rosary, with the intention of making reparation to me.”

Reformation and reparation are the only hope for the Catholic Church in America.