St. Teresa Benedicta of the Cross was a German Jew who was born on October 12, 1891 and named Edith Stein. She was a martyr and a brilliant author and philosopher who suddenly converted to Catholicism after reading the Autobiography of St. Teresa of Avila.

One evening, she picked it up and read the whole book in one night. She later said, “When I had finished the book, I said to myself: This is the truth!”

On January 1, 1922, Edith was baptized and took the name of Teresa Benedicta [Blessed] of the Cross (in Latin, Teresia Benedicta a Cruce). 2022 is the 100th anniversary of her baptism.

In the 1930s, darkness broke out over Germany. St. Teresa said, “I had heard of severe measures against Jews before. But now it dawned on me that God had laid His hand heavily on His people, and that the destiny of these people would also be mine.”

In 1933, she entered the cloistered Carmelite order in Cologne, Germany. In 1938, she was smuggled across the border to the Carmelite convent in Echt, Holland, to escape Nazi persecution. She was later joined there by her sister, Rosa, a lay Carmelite.

This is what St. Teresa wrote in her will on June 9,1939, “Even now I accept the death that God has prepared for me in complete submission and with joy as being His most holy will for me. I ask the Lord to accept my life and my death … so that the Lord will be accepted by His people and that His Kingdom may come in glory, for the salvation of Germany and the peace of the world.”

In 1942, the Nazi Germans began a persecution of Catholics in Holland. This was an act of retaliation against the letter of protest written by the Dutch Catholic Bishops against the pogroms and deportations of Jews.

St. Teresa dismissed the question about a possible rescue. She said, “Do not do it! Why should I be spared? Is it not right that I should gain no advantage from my Baptism? If I cannot share the lot of my brothers and sisters, my life, in a certain sense, is destroyed.”

She was arrested by the Gestapo on August 2,1942, while she was in the chapel with the other sisters. St. Teresa and Rosa were seized. As the Gestapo dragged them from the convent, St. Teresa’s last words were, “Come Rosa, let us go for our people.”

St. Teresa and Rosa were transported by train with over 900 other Jews to the concentration camp in Auschwitz, Germany, where they were both murdered in the gas chambers on August 9. 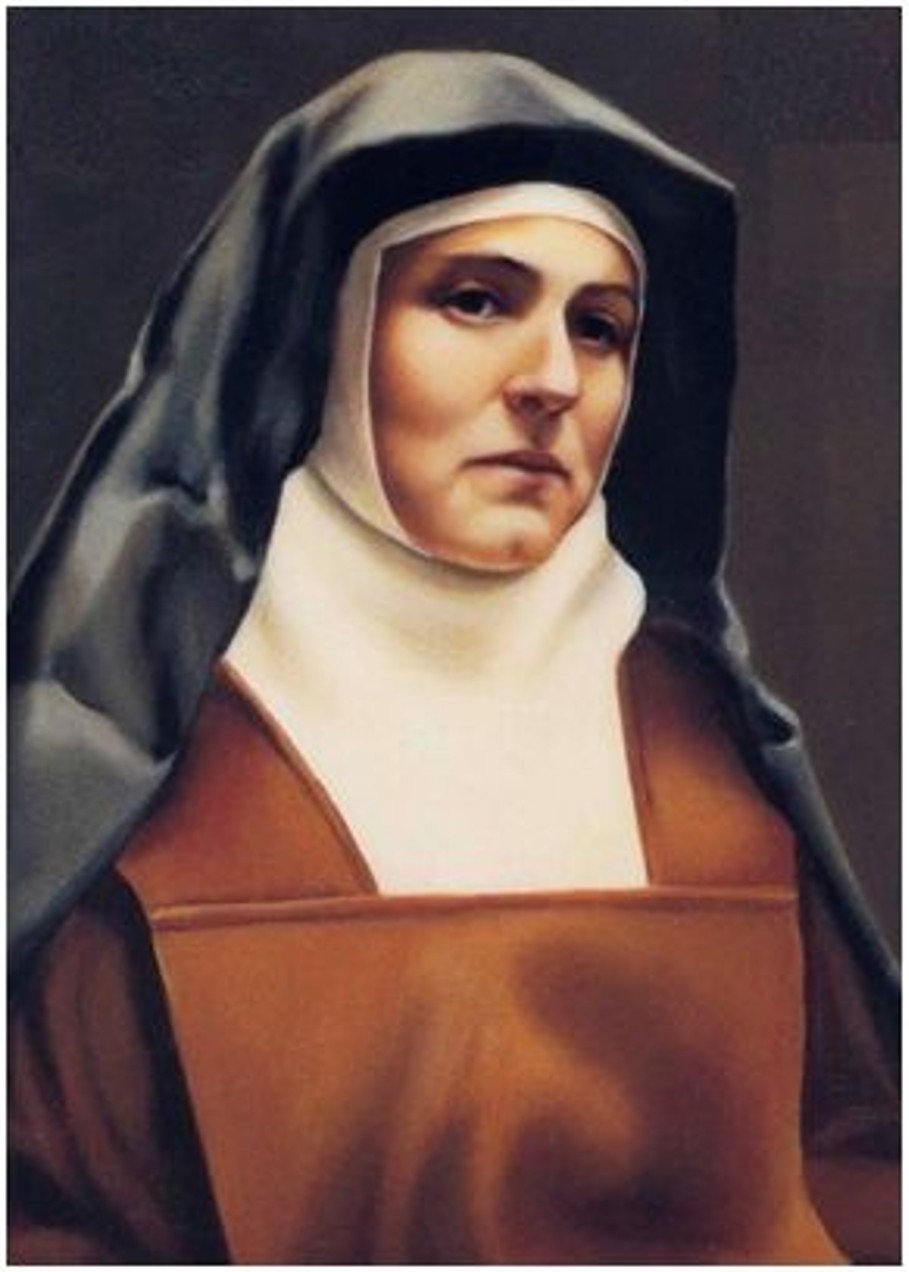 On October 1, 1999, St. John Paul II proclaimed St. Teresa a co-patron saint of Europe – together with St. Catherine of Siena and St. Bridget of Sweden.

He wrote in his Apostolic Letter of the same date,

I feel that the decision to choose this “feminine” model of holiness is particularly significant within the context of the providential tendency in the Church and society of our time to recognize ever more clearly the dignity and specific gifts of women….

[St. Teresa] forcefully proclaimed by her martyrdom the ways of God and man in the horrendous atrocity of the Shoah [the Holocaust]. She has thus become the symbol of a human, cultural and religious pilgrimage which embodies the deepest tragedy and the deepest hopes of Europe…. For she brings us to the heart of this tormented century, pointing to the hopes which it has stirred, but also the contradictions and failures which have disfigured it….

St. Teresa  made her own the suffering of the Jewish people, even as this reached its apex in the barbarous Nazi persecution which remains, together with other terrible instances of totalitarianism, one of the darkest and most shameful stains on the Europe of our century.….

Today’s proclamation of Teresa as a Co-Patroness of Europe is intended to raise on this Continent a banner of respect, tolerance and acceptance which invites all men and women to understand and appreciate each other, transcending their ethnic, cultural and religious differences in order to form a truly fraternal society….

A Europe which would exchange the values of tolerance and universal respect for ethical indifference and skepticism about essential values would be opening itself to immense risks and sooner or later would see the most fearful specters of its past reappear in new forms.

Let us pray with St. Teresa her own prayer for peace,

“O my God, fill my soul with holy joy, courage and strength to serve You. Enkindle Your love in me and then walk with me along the next stretch of road before me. I do not see very far ahead, but when I have arrived where the horizon now closes down, a new prospect will open before me and I shall meet with peace.”