“Today the Church needs saints. This calls for our combating our attachment to comforts that lead us to choose a comfortable and insignificant mediocrity. Each one of us has the possibility to be a saint, and the way to holiness is prayer. Holiness is, for each of us, a simple duty.”  St. Mother Teresa 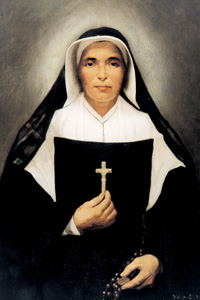 October 3 is the feast of one of our saints of the states, St. Mother Guerin. Let our nation turn its lonely eyes to her for courage and hope.

St. Mother Theodore Guerin was born on October 2, 1798, at Etables-sur-Mer, Brittany, France. On July 12, 1840, Mother Guerin left France with five other Sisters for America. Leaving home was painful for her as it was with all missionaries. She wrote in her journal, “The moment of separation and of death had come at last. We had to leave all. After having made the most painful sacrifices, which had cost our hearts so much, we had to break the last ties by tearing ourselves away from our dear home so tenderly loved by all the Sisters of Providence. It would be difficult to describe what passed in my soul when I felt the vessel beginning to move and I realized that I was no longer in France. It seemed as if my soul were being torn from my body.”

Mother Guerin left her “dear home” and traveled to the Diocese of Vincennes that was established six years earlier by its first Bishop Simon Gabriel Brute, one of St. Mother Seton’s spiritual advisors. The diocese was huge. It comprised the entire state of Indiana and the eastern third of Illinois. Mother described the frontier land as “wild, uncultivated, a world which seems to be in its cradle.” After three long months of travel by sailboat, trains, steamboats and stagecoach they arrived in Indiana. “What was our astonishment,” Mother wrote, “to find ourselves in the midst of the forest, no village, not even a house in sight.”

They were led to a farmer’s small house where they spent their first bitter winter. Because of the great need for religious instruction and education, the Sisters opened St. Mary’s Academy, a school for girls, on July 4, 1841 at Saint Mary-of-the-Woods, Indiana. Her motto for the school was, “Knowledge and Virtue United.”

Mother urged the Sisters, “Always be children of the Church!” She reminded the Sisters of the dignity of their vocation. “God in calling us to the religious life had not wished only to sanctify us,” she told them, “but He has called us to work with Him for the salvation of our brother. O, what a beautiful vocation is ours! Have you sometimes thought, my dear Sisters, that you have been called to do on earth what Our Lord Himself did? He instructed, and you instruct. He was surrounded by little children, and you – you pass your life among them.”

Author Booth Tarkington’s mother attended St. Mary’s. He wrote, “I think my mother’s days at ‘Old Saint Mary’s’ were the happiest of her life. The recollection of them was bright and vivid sixty years afterward. Something rare and fine was brought from France to Saint Mary-of-the-Woods, and none of those who were students there remained unaffected by it.”

Mother’s apostolate to the frontier girls of the Midwest was contemporary with St. Mother Duchesne’s apostolate to the frontier girls of the West. Like Mother Duchesne’s Sisters, Mother Guerin’s Sisters suffered from inadequate housing and diets, extremes of heat and cold and storms. She wrote, “Our life is hard; obliged to have business relations with a people noted for its skill in and inclination toward sharp dealing; having in our own house Americans . . . certainly is like killing us, so to speak, with pinpricks.”

On October 2, 1842, a devastating fire, probably set by a bigoted arsonist, destroyed the Sisters’ barn and food harvest. They had no food for the next three days. Mother wrote, “If ever this poor little community becomes settled, it will be established on the Cross; and that is what gives me confidence and makes me hope, sometimes even against hope.”

Mother trusted all to Divine Providence. She told her Sisters to “…rest assured, my dear daughters, if you lean with all your weight upon Providence, you will find yourselves well supported.”

She found solace in prayer and wrote, “What strength the soul draws from prayer! In the midst of a storm, how sweet is the calm it finds in the heart of Jesus.” She was consoled by the Eucharist and said, “If we truly knew how to appreciate it, it alone would suffice to fortify and sustain us.” She encouraged her Sisters, “Send your heart a thousand times a day to adore our Lord really and truly present in the Holy Sacrament.”

She entrusted the mission of the Sisters of Providence to the Blessed Virgin Mary and wrote, “We have promised to belong entirely to God. We have made vows, but especially we have invoked Mary and St. Anne, her august mother. It is to them that we owe our preservation.”

In 1849, Mother wrote, “There are always from six to seven hundred pupils in our schools. Several who have been educated in our houses, and are now married and in society, are advocates of our holy religion. We begin to see the good which our Congregation is doing in this country.”

In 1853, a larger, permanent Motherhouse was opened and began to fill with vocations from former students who joined their teachers in the Congregation.

Thereafter, Mother Guerin’s health soon began to fail, her intestinal ailments worsened and she was worn out from her many labors and visits to the missions. In 1855 she wrote to her Mother Superior in France, “I neither die nor live. One week I am a little better and the next I relapse.”

She wrote a summary of her mission for her Sisters:

Yes, my dear daughters, hope in God, and you will not be confounded. See what he has already done for you. Fifteen years ago today, October 22, 1840, six Sisters arrived in this forest, at that time so savage; they were strangers to the country, to the manners and customs, to the ways of America; they did not know one word of English. Now we are a community composed of sixty; here at Saint Mary’s we are eighteen Sisters wearing the religious habit, and twenty postulants ardently desiring to be clothed in it.

More than twelve hundred children receive religious instruction in our twelve houses of education which already bear abundant fruit. What good is being done by the Sisters of Saint Mary’s!

Mother Guerin died on May 14, 1856. The priest who administered the last rites at her deathbed wrote, “The extraordinary beauty on the face of this good Mother proclaimed that God had already glorified His servant. Her countenance became luminous, shone with purity and happiness. Never had I seen it so beautiful. It is thus that the saints die, or rather that they fall asleep in the Lord in the evening of their lives filled with good works.”

Pope Benedict XVI canonized Mother Guerin on October 15, 2006. At the end of the canonization, when reciting the Angelus, the Holy Father prayed that St. Mother Guerin will encourage “us to live the faith and to witness before our contemporaries, paying ever more attention to little ones and to the most abandoned in society.”

Her feast day is October 3.

To learn more about St. Mother Theodore Guerin and all of the American Saints and Blesseds, you may read my book, Saints of the States. You may order it by clicking here. Save 20% by entering 20off in the Discount Box of your shopping cart.

Fr. Andrew Apostoli CFR, Vice Postulator for the cause of the Sainthood of Archbishop Fulton J. Sheen, wrote the Foreword and said,

This book is a wonderful contribution to appreciate the rich spiritual heritage we possess in the lives of so many heroic men and women of America. Dan Lynch traces the historical development, both secular and religious, through the centuries.” It’s the history of the faith in the United States and its saints in their historical context.