Home » St. Margaret Mary and Jesus King of All Nations

St. Margaret Mary and Jesus King of All Nations

St. Margaret Mary and Jesus King of All Nations

Jesus appeared to St. Margaret Mary in the Burgundian French village of Paray-le-Monial on December 27, 1673, the Feast of Saint John the Evangelist, and thereafter over the next 18 months. He revealed to her the devotion to his Sacred Heart and asked for the receptions of Holy Communions on the first Friday of each of nine months in reparation for the offenses against him. He also asked for a “Holy Hour” on Thursday nights to meditate on Jesus’ Agony in the Garden of Gethsemane.

St. Margaret Mary wrote, “He showed me that it was his great desire of being loved by men and of withdrawing them from the path of ruin into which Satan hurls such crowds of them, that made him form the design of manifesting his Heart to men, with all the treasures of love, of mercy, of grace, of sanctification and salvation which it contains, in order that those who desire to render him and procure for him all the honor and love possible, might themselves be abundantly enriched with those divine treasures of which this Heart is the source.”

Later Jesus said to her, “Behold the Heart that has so loved men that it has spared nothing, even to exhausting and consuming itself, in order to testify to its love; and in return, I receive from the greater part only ingratitude, by their irreverence and sacrilege, and by the coldness and contempt they have for me in this Sacrament of Love. But what I feel most keenly is that it is hearts which are consecrated to me that treat me thus.” 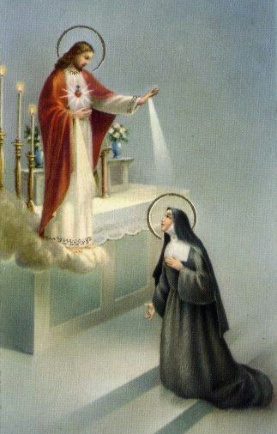 Jesus prophesied the future apostasy of the French nation and revealed to St. Margaret Mary the remedy. Jesus requested that King Louis XIV consecrate himself to his Sacred Heart. However, King Louis XIV did not make it as requested.

When Jesus’ Secretary was working on her Journal of the Jesus King of All Nations Devotion, she had a vision of St. Margaret Mary coming to her carrying in her hand a very large heart, alive, with flames issuing from the top. St. Margaret Mary said, “I bring you the Master’s Heart; go and set the world on fire with it.” Our cold world needs to be set on fire with the love of the Sacred Heart of Jesus and his mercy that are shown in his image of Jesus King of All Nations.

Similar to the request of Jesus to King Louis XIV, he has requested us to enthrone his image everywhere. Let us respond to his plea, “take up my Devotion of Jesus King of All Nations for in its practice you shall find for yourselves a haven of grace, mercy and protection. Enthrone this my image everywhere for I shall be powerfully present there and the power of my sovereign kingship shall surely shield you from my just judgement.”

Similar to the chastisement of the French Revolution, Jesus King of All Nations now has prophesied an imminent Great Chastisement and, as a remedy against it, he revealed his Devotion and his request for the enthronement of his image everywhere.

Jesus King of All Nations said, “In these times only one thing will be given as a remedy. I myself am that remedy!” (Journal 159). “I have told you of the remedy: that of the public practice of my Devotion and veneration of my image. Let as much as can still be done to bring this about be done. Let those who are able enthrone my image in their homes, parishes and dioceses.” (Journal 671).

Jesus is seemingly calling out to us, “You need me!” There is no other leader, or political, legal or monetary solution. We are beyond human redemption and only God can help us.

While there is still time before his prophesied Great Chastisement, let us practice his devotion and enthrone his image for his protection from it.