“When nobody else did, she loved us.”
A Navajo Indian man after the funeral Mass for Mother Drexel 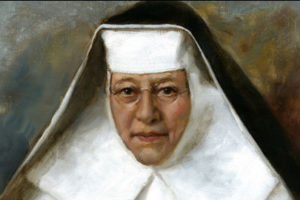 “Today the Church needs saints. This calls for our combating our attachment to comforts that lead us to choose a comfortable and insignificant mediocrity. Each one of us has the possibility to be a saint, and the way to holiness is prayer. Holiness is, for each of us, a simple duty.”
~St. Mother Teresa

March 3 is the feast of one of our saints of the states, St. Katharine Drexel. Let our nation turn its lonely eyes to her for courage and hope.

In the summer of 1886, she sailed to Europe with her sisters. Katharine sought help from European monasteries to send priests to help Native Americans in the West. However, none of them would make such a commitment. So, she decided to ask the Pope. She pleaded with him for missionary priests for the Indians. To her astonishment, he responded, “Why not, my child, yourself become a missionary?”

Years later, Katharine told her Sisters that once she left the Holy Father, she could not get away from the Vatican fast enough. When she got outside she sobbed and sobbed. She was initially frightened at the implications of the Pope’s words. But slowly, after prayer and spiritual direction, she accepted his advice and gave up the idea of a contemplative vocation.

Katharine decided to found her own order. She wrote to her spiritual director, Bishop O’Connor, in humility, “The Feast of St. Joseph brought me the grace to give the remainder of my life to the Indians and Colored, to enter fully and entirely into your views and those of Reverend Stephan as to what is best for the salvation of the souls of these people.”

When she entered the convent, a Philadelphia newspaper wrote, “[She has taken] her first step yesterday in the renunciation of the world, with all that it contains of family, brilliant associations, and great wealth. One of America’s greatest heiresses [will be] laying aside all that so many thousands live for and adopting a new life as opposite as can be well imagined from that which she might be supposed to favor.” Archbishop Ryan reconciled her vow of poverty and her fortune by saying, “You can retain the possession and the administration, but you have to promise in case of my requiring it, that you would renounce your possessions.”

Sister Katharine always found in the Eucharist the source of her love for the poor and the oppressed and the inspiration to combat the effects of racism. The Eucharist was at the heart of her spirituality. Her love and devotion to Jesus was expressed in the union of adoration of the Most Blessed Sacrament with active service for the good of others, giving of herself and everything she possessed.

“The spirit of the Eucharist consists in the donation of one’s own being,” she wrote. In order to point out the central nucleus of the charism of the congregation she founded, she wrote to her Sisters, “Get up after receiving Holy Communion and go find Him in the people.  Everything you do for the people, you do for Him.”

On February 12, 1891, Sister Mary Katharine Drexel was professed as the first Sister of the new missionary congregation, The Sisters of the Blessed Sacrament.

Over the next 42 years, Mother Katharine made many missionary journeys, established many missions, schools and convents and made many visitations to supervise them. She traveled by train, stagecoach, boat and car from one end of the country to the other in a flurry of apostolic activity. In most cases in the early days of her missions, Mother herself went to help the mission get set up and welcomed the Sisters when they arrived. She had to deal with architects, contractors, lawyers and local church authorities. She had to be familiar with all of the details of the mission and plan its implementation. She also helped to clean and furnish the buildings. It took all of her talents in cooperation with God’s graces to do what seemed the impossible. 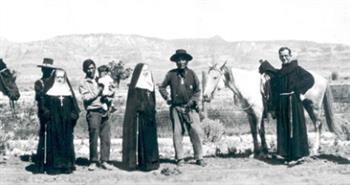 Mother believed that the best help for African-Americans and Indians was a Christian education that taught the whole person, mind and spirit. She could not change a racist society but she did what she could do within its limitations. She taught the victims of discrimination that they were children of God, equal in dignity to all. That education entered into their homes and later into society. 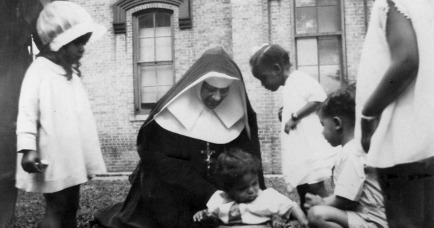 Discrimination, racism, and segregation through so-called “separate but equal” public facilities remained as the law of the land of the United States until the Supreme Court reversed itself in 1954 in the case of Brown v. Board of Education of Topeka. Finally, after 335 years of living in the United States, racial discrimination against African-Americans was declared illegal. Mother Katharine’s schools, teachings and example helped to lead the way to de-segregation and the Civil Rights Movement that followed it. 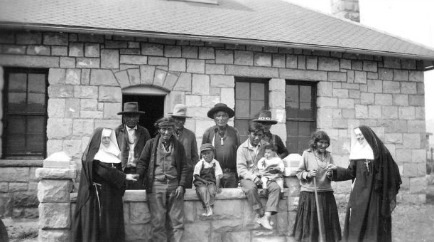 In the fall of 1935, after a series of visitations to her missions, Mother Katharine suffered from a cerebral hemorrhage in St. Louis. She was advised to change her lifestyle, end her visitations and curtail her activities. With great reluctance, she agreed and returned to the Motherhouse in Cornwells Heights, Pennsylvania. She said, “Nobody is necessary for God’s work. God can do the work without any of His creatures.” Her sister Louise wrote, “Truly the zeal of God’s house has consumed Mother. It is well nigh impossible in the span of our life to cover such a vast extent of ground and influence so many lives.”

Mother was confined for her last 20 years to two rooms on the second floor of the Motherhouse. She lived a life of prayer, penance and writing in her wheelchair. She prayed at daily Mass and daily two complete Rosaries of 30 mysteries, many Stations of the Cross, hours of meditation and countless litanies and ejaculations. Her wheelchair and writing evidenced her penitential poverty. The wheelchair was a makeshift thing consisting of a pupil’s desk fastened to wheels. She wrote letters giving guidelines for her Sisters on scraps of paper with pencils that she sharpened down to the erasers. By God’s providence, Mother Katharine had become the contemplative nun that she always wanted to be.

On the morning of March 3, 1955, Mother Katherine suddenly opened her eyes from her bed, looked straight ahead, closed them again, gave a sigh and breathed her last at the age of 96.

Mother Katharine’s friend, Helen Grace Smith, stood by her coffin and said, “Her love of personal poverty made her oblivious to comfort of any kind. She went long distances, in all kinds of conveyances, and often walking when there was no other way, and she went simple, silent and unknown.”

Bishop Joseph McShea, Auxiliary Bishop of Philadelphia, preached the funeral that was attended by 250 Bishops, priests and brothers. He said, “The beloved soul of Mother Katharine was activated, inspired and impelled by an insatiable love of God and by complete subjection to His adorable Will. Hers was not a humanitarianism that stops where true love should begin. She was not a mere social reformer, educator or philanthropist striving to better the condition of her fellow man while permitting him to ignore God.” Mother was a true missionary with a contemplative heart and true love of God and neighbor.

Six pallbearers carried out her coffin. Fittingly, two were White, two were African-American and two were Native Americans. Her coffin was interred in a crypt underneath the chapel at the Motherhouse in Bensalem, Pennsylvania.

Mother Drexel’s long life was framed by the Civil War and the Korean War. It included the Industrial Revolution, the Centennial Year of the Declaration of Independence and the Atomic Age.

In her lifetime, Mother spent millions of dollars from the income of the Drexel Trust Fund and used it to establish 60 institutions to care for the education of 25,000 Native and African Americans. She started with 13 Sisters who grew to 503 at the time of her death. She founded 49 convents for her Sisters, set up training courses for catechists and teachers, established 12 schools for Native Americans and nearly 100 schools in rural areas and inner cities of the South to educate African-Americans. She founded Xavier University the first Catholic university predominantly for African-Americans in the Western Hemisphere. The schools and the Sisters who staffed them influenced generations of students, their parents and their communities.

At the time of Mother Drexel’s death, there were more than 500 Sisters teaching in 63 schools in the United States. Soon after her death, the American Civil Rights Movement began to bring equal justice under the law to all. She was a true American. Her roots begin in early American history and she implemented the American democratic principles of equal rights and opportunities for all regardless of race, color, religion or national origin. She helped to forge the way for the Civil Rights Bill of 1964 and the Voting Rights Bill of 1965.

You may read the full story of her life in my book Saints of the States. Please click here to order your copy today.