Home » St. Joseph the Worker and Our Lady of America

St. Joseph the Worker and Our Lady of America

The Feast of St. Joseph the Worker is celebrated on May 1. The Feast was instituted by Pope Pius XII in order to impress on our minds the dignity of human work and the principles according to which it should be carried on. He chose St. Joseph as the model and helper of all workers.

From the example of St. Joseph, we should learn that we work in obedience to God’s command for our earthly needs while at the same time hoping to attain our heavenly reward. He who took care of the Holy Family by his skill and labor will not fail to extend his help and protection to his co-workers. 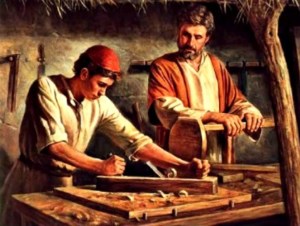 Pius XII decreed that the Feast of St. Joseph the Worker should be celebrated on May 1, the traditional Workers’ Day. He hoped that St. Joseph’s patronage would promote peace between workers and their employers and end the strife that too often marred their relationship.

From Scripture we know that the great virtue of St. Joseph was his obedient faith. “He did as the angel of the Lord commanded him and took Mary as his wife.” (Mt. 1:24). He did this in spite of the apparent fact that Mary’s pregnancy was visible to everyone. He took her in the mystery of her motherhood and acted in obedient faith, as did Mary when she said, “Let it be done to me according to your word”. (Lk. 1:38). “Blessed are they who have not seen, yet have believed.” (Jn. 20:29).

As the Second Vatican Council teaches, “The obedience of faith must be given to God as He reveals Himself. By this obedience of faith man freely commits himself entirely to God, making the full submission of his intellect and will to God who reveals himself and willingly assenting to the revelation given by Him.” (Second Vatican Council, Dogmatic Constitution on Divine Revelation, 5). St. Joseph is the model of this obedient faith.

St. Joseph obeyed the command of the angel and took Mary as his wife in marriage and virginity in a communion of love with God and each other.

As the foster father of Jesus, St. Joseph showed Him all the natural love and affection of a father’s heart. He placed his life at the service of God in total self-giving for our Savior who grew up in his house. And Jesus grew “in wisdom and in stature and in favor with God and man.” (Lk. 2:52).

On his part, Jesus “was obedient to them” (Lk. 2:51) and thereby sanctified His daily work with St. Joseph. Work was the daily expression of love in the Holy Family. Work, which was a consequence of Original Sin (see Gn. 3:17-20), was now redeemed by Jesus who labored at the workbench with St. Joseph. Work is a human good that transforms nature and makes man in a sense, more human.

Pope Paul VI said, “St. Joseph is the model of those humble ones that Christianity raises up to great destinies; he is the proof that in order to be a good and genuine follower of Christ, there is no need of great things – it is enough to have the common, simple and human virtues, but they need to be true and authentic.”

Pope Pius IX declared St. Joseph to be the “Patron of the Catholic Church”. We place our confidence in his protection because he will protect the Church family just as he protected the Holy Family.

St. John Paul II prayed, “May St. Joseph become for all of us an exceptional teacher in the service of Christ’s saving mission, a mission which is the responsibility of each and every member of the Church: husbands and wives, parents, those who live by the work of their hands or by any other kind of work, those called to the contemplative life and those called to the apostolate… .”

St. Joseph’s Oratory is located on Mount Royal in Montreal, Quebec. It has the second largest dome in the world, after St. Peter’s in Rome. The Oratory was built through the faith and signs and wonders performed by St. Andre Bessette in the early part of the 21st century.

In the year 1916 alone, 435 people were healed. Brother Andre attributed all of these to the help of St. Joseph. He died at the age of 91 in 1937. Over a million faithful filed past his casket day and night for seven days.

Jesus and Mary desire that the Pure Heart of St. Joseph be honored on the First Wednesday of each month. On March 30, 1958, St. Joseph  appeared to Sister Mildred and said:

I am the protector of the Church and the home, as I was the protector of Christ and His Mother while I lived upon earth. Jesus and Mary desire that my pure heart, so long hidden and unknown, be now honored in a special way. Let my children honor my most pure heart in a special manner on the First Wednesday of the month by reciting the Joyful Mysteries of the Rosary in memory of my life with Jesus and Mary and the love I bore them, the sorrow I suffered with them. Let them receive Holy Communion in union with the love with which I received the Savior for the first time and each time I held Him in my arms.

Those who honor me in this way will be consoled by my presence at their death, and I myself will conduct them safely into the presence of Jesus and Mary.

So, let us respond to the requests of St. Joseph, honor him as Jesus and Mary  requested on First Wednesdays and ask his intercession for the great gifts of God’s protection, peace and the presence of St. Joseph and them at our death.