St. John, the Builder of Mary’s House
December 27 is the feast of St. John, the Beloved Disciple. From the day of the crucifixion, when Jesus entrusted His mother to the care of John, he took her into his heart and cared for her. After the persecution under King Herod Agrippa I in the year 42, John left Jerusalem and sailed over the Mediterranean Sea with Mary to safety to Ephesus, in what is now Turkey. Ephesus was the rich center of the Roman Empire in the East with a population of a quarter million. There he built her a house where she lived and from which she was assumed into heaven.

In the 18th century, Pope Benedict XIV accepted the accumulated evidence and tradition and wrote in his Treatise on the Holy Mysteries on Holy Friday that “St. John leaving for Ephesus, took Mary with him and it was there that the Blessed Mother was assumed into heaven.”

In the early 1820s, Blessed Sister Catherine Emmerich saw visions of the life of the Blessed Virgin Mary and of her house in Ephesus. Blessed Catherine was a German mystic who was bed-ridden with the stigmata. She never left Germany. Her visions were extraordinarily extensive and detailed. They contained facts and places that she could not have naturally known. She described her visions in detail to her secretary, Clemens Brentano. He published a book about them. 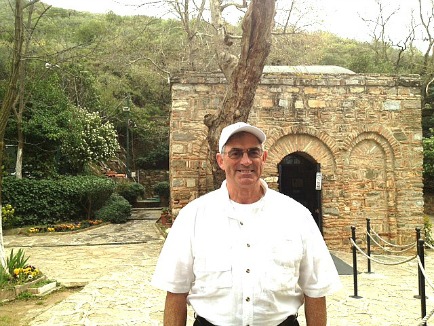 Dan Lynch at Mary’s House
Blessed Catherine said that after Our Lord’s Ascension, Mary lived on Mount Zion in Jerusalem, then in Bethany, and then was taken by St. John to Ephesus, where she lived for nine years in the house that he built for her. Several Christian families had already settled there in caves or rustic huts in a scattered village where they lived a simple, natural life.

In 1890, Brentano’s book was read by some priests in Izmir, Turkey, near Ephesus. They were curious to see whether they could confirm Blessed Catherine’s description of Mary’s House from the evidence on the ground. So, they went up the mountain in the summer of 1891. After searching in the mountains, they came upon some natives who led them to the remains of a small house near the summit of an isolated peak. The site and the remains corresponded accurately to Blessed Catherine’s description.

On December 1, 1891, Archbishop Timoni of Smyrna declared in a formal document that those remains were truly the remains of the house inhabited by the Blessed Virgin Mary.

The priests learned that the natives were descended from the early Christians of Ephesus and that the house had been venerated since time immemorial. They called the house Panaya Kapulu – “The House of the Holy Virgin”.

Archaeologists discovered that the foundation of Mary’s House dated to the first century. Later archeological excavations corresponded with Blessed Catherine’s description and diagrams. They proved that her visions in fact showed reality and eventually Mary’s House was rebuilt upon the original foundation.

Eusebius wrote in his chronicle that St. John died in peace at Ephesus, in the third year of the reign of the Roman Emperor Trajan and the hundredth of the Christian era at the age of approximately 94. He was buried in a graveyard on Ayasuluk Hill in what is now the city of Selcuk.

In September 2001, soon after the 9/11 attack on America, I flew to Muslim Turkey with three companions on an almost empty airplane. Many people were afraid to fly for fear of more airplanes being hijacked.

Pope Pius XII said, “The holy House should be a Marian center which is unique throughout the world, a place where Christians and Muslims of all rites and denominations and of all nationalities can meet each other to venerate the Mother of Jesus, and make true the prophecy, ‘All Generations will call me blessed.’ ” (L’Osservatore Romano, April 24, 1954).

I went to Ephesus to pray for reconciliation and peace with Muslims. I also went there to walk in the footsteps of St. John to Mary’s House. The early morning sun beat down on me as I prayed at his tomb located in the ruins of the Basilica devoted to him on Ayasuluk Hill outside of the city of Ephesus. John wrote his gospel and his letters in Ephesus and he often walked through the ancient city and up the mountain to Mary’s House.

I walked in the footsteps of John’s likely route down from his Basilica and west to the ancient city of Ephesus. I stopped there for a visit at the ruins of Mary’s Church. This was the first church in the world that was dedicated to Mary. The Council of Ephesus was held there in 431. It proclaimed the first Marian dogma that Mary is the Mother of God.

After a refreshing drink of water, I continued through the magnificent ruins of Ephesus and began the climb up the highway of Nightingale Mountain, from which I could see the powder blue sky, the cobalt blue Aegean Sea and the Island of Samos glistening like a diamond in the sea. As I climbed the road up the mountain, I passed the huge statue of Mary that overlooks the valley below. I took it as a sign that she was encouraging me to keep climbing up to her House.

Three and a half hours after I left St. John’s Basilica, I reached a plateau hidden on the back of the mountaintop. As the sweat poured off my face, I stood before Mary’s House which is nestled in the mountainside. The restored House is made of stone and its foundation has been there for almost 2000 years. This House was the fountain of grace from which sprang the dogma of Mary Mother of God and the great basilicas of Ephesus dedicated to Mary and to St. John. From here her body and soul were assumed into heaven.

Then I walked behind her House and prayed while on the path of the Stations of the Cross that Mary herself made, according to the visions of Blessed Sister Catherine Emmerich, and then at the likely place of her assumption. I reflected on her House that had lain here in ruins for almost 1900 years, little known by the world except for local venerators, until the Church ruled in the late 19th century that the ruins were the remains of Mary’s House.

You may read the full story of the life of St. John and Mary’s House in my book The Gospel of Love found here.

Father Peter Damian Fehlner, O.F.M Conv. S.T.D. wrote about the book, “You will experience John’s life as if you were with him nearly 2000 years ago. You will experience John’s innermost thoughts and doubts as he struggles to accept Jesus Christ as the Messiah, the Son of Man and the Son of God, and his teachings that constitute the Gospel of Love. You will see John’s transformation from tempestuousness to tranquility as he gradually comes to know and believe in the love that God has for all of us. Our thanks to Dan Lynch for this inspiring work!”

Father James McCurry, Minister Provincial of the Order of Friars Minor Conventual, gave the homily at Father Peter’s funeral.  He said that he was a “scholar, theologian and genius.” He said that Father Peter was “genuinely a true genius, one of the greatest scholars in the 800 year history of the Franciscan Order.”