Please visit our website at www.JKMI.com that promotes devotion to St. John Paul II. Watch the video about him, Do You Remember Me? We should remember him as a special intercessor for the apostolate of the Missionary Image. On our website you can learn about his spirituality, his devotional life, his teachings, his plan for the Church in America, his holiness and his accomplishments.

St. John Paul II practiced many forms of popular piety as a means of showing his love and devotion to Jesus, Mary and the saints. His personal devotions included adoration of the Blessed Sacrament; pilgrimages; processions; honoring the Blessed Virgin Mary through the wearing of the Brown Scapular as a sign of his total consecration to Jesus through Mary; the Rosary; the Angelus; novenas; the Stations of the Cross, the veneration of relics; the use of sacramentals and his devotions to The Divine Mercy and Our Lady of Guadalupe.

The Pope had a great devotion to Our Lady of Guadalupe. He made more pilgrimages to her Basilica Shrine in Mexico City than to anywhere else. In January of 1979, he made his first pilgrimage there and consecrated his papacy to her. 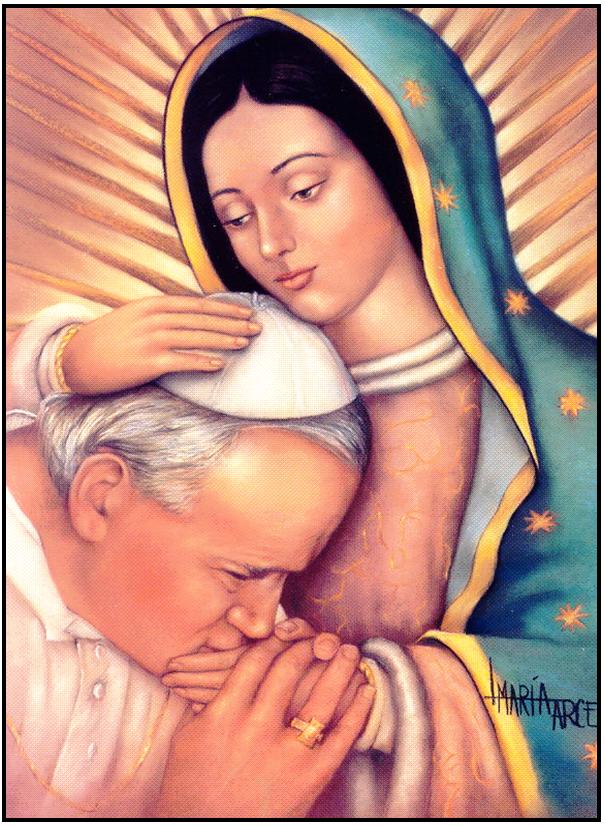 One day, when he paused before a replica of the tilma, the Pope said, “I feel drawn to this picture of Our Lady of Guadalupe because her face is full of kindness and simplicity… it calls me.” He responded to this call and made several more pilgrimages to her Basilica Shrine.

In 1999, he made his fourth pilgrimage to her shrine and consecrated the entire Continent to Our Lady of Guadalupe. He concelebrated Mass at the Basilica with five hundred Bishops and five thousand priests. He virtually declared the end of the Culture of Death and preached, “The Church must proclaim the Gospel of Life and speak out with prophetic force against the Culture of Death. This is our cry: life with dignity for all. . . . The time has come to banish once and for all from the Continent every attack against life. . . . As a matter of urgency, we must stir up a new springtime of holiness on the Continent so that action and contemplation will go hand in hand.”

He concluded his homily with a prayer, “Oh, Sweet Lady of Tepeyac, Mother of Guadalupe! We present to you this countless multitude of faithful who pray to God in America. You who have come into their hearts visit and comfort all homes, parishes and dioceses of all the Continent.” The Missionary Image apostolate tries to answer his prayer through Visitations of the Missionary Images to “all homes, parishes and dioceses.”

In 1999, the Pope consecrated the entire American continent to Our Lady of Guadalupe as our Queen and Mother. He made his last pilgrimage to her Basilica Shrine to canonize Juan Diego as a saint on July 31, 2002. He established his feast day as December 9, the date of Our Lady of Guadalupe’s first apparition to him.

The year 2003 marked Pope John Paul II’s twenty fifth anniversary as Pope. He credited Our Lady of Guadalupe as his guide. He said, “Ever since I went on pilgrimage for the first time to the splendid Shrine of Guadalupe on January 29, 1979, she has guided my steps in these almost twenty five years of service as Bishop of Rome and universal pastor of the Church. I wish to invoke her, the sure way to encounter Christ, and who was the first evangelizer of America, as the ‘Star of Evangelization,’ entrusting to her the ecclesial work of all her sons and daughters of America.” 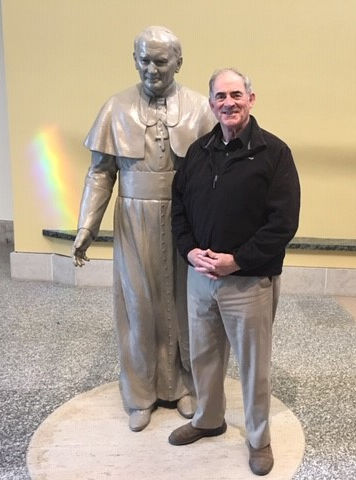 Dan Lynch with a statue of St. John Paul II at his Shrine in Washington D.C.

Pope John Paul II died on April 2, 2005, after long suffering from Parkinson’s disease. He died on the eve of a feast instituted by him, The Feast of Divine Mercy. He was 84 years old and had served as Pope for 26 years. He was declared “blessed” because of the holiness of his life and the miraculous healing of a nun who suffered from Parkinson’s disease. This was attributed to his intercession.

He was beatified by Pope Benedict XVI on May 1, 2011, The Feast of Divine Mercy and he was canonized by Pope Francis on April 21, 2014.  His feast day is October 22, the date of his liturgical inauguration as Pope.

We need your help to continue our mission of remembering St. John Paul II and promoting devotion to him. Please help us!