April 28 is the Feast of St. Louis de Montfort. His spirituality had a great influence on St. John Paul II. Many people thought that they understood Pope John Paul II. However, he told his biographer, George Weigel, “They try to understand me from outside. But I can only be understood from inside.” What people saw on his outside was a fruit of his inside. The holy fruits of his active life were the result of his inside spirituality of St. Louis to Montfort’s Total Consecration to Jesus Christ through the Blessed Virgin Mary.

Pope John Paul II said, “The more my inner life has been centered on the mystery of the redemption, the more surrender to Mary, in the spirit of St. Louis de Montfort, has seemed to me the best means of participating fruitfully and effectively in this reality, in order to draw from it and share with others its inexpressible riches.” 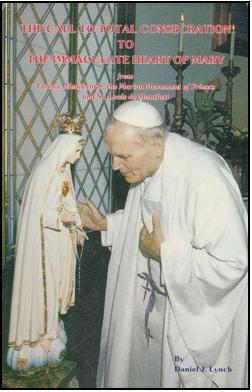 St. Louis Marie Grignion de Montfort was a priest born In Montfort-La-Canne, France on January 31, 1673. He dropped his full name and became known simply as St. Louis de Montfort, after his hometown.

St. Louis wrote the book True Devotion to Mary in which he taught Total Consecration to Jesus through Mary as a means of renewing our Baptismal promises. By this Total Consecration we renounce Satan, his pomps and works and permanently dedicate ourselves to Jesus through Mary, giving her our bodies and souls, our goods and even the merits of our good works for her disposition according to her will. This was the consecration personally made and lived by Pope John Paul II and recommended by him to us.

Pope John Paul II wrote, “’Perfect devotion to Mary’ – that is how the author of the treatise puts it – that is, the true knowledge of her, and confident surrender to her, grows with our knowledge of Christ and our confident surrender to His person. What is more, this ‘perfect devotion’ is indispensable to anyone who means to give himself without reserve to Christ and to the work of redemption. Grignion de Montfort even shows us the working of the mysteries which quicken our faith and make it grow and render it fruitful. The more my inner life has been centered on the mystery of the redemption, the more surrender to Mary, in the spirit of St. Louis de Montfort, has seemed to me the best means of participating fruitfully and effectively in this reality, in order to draw from it and share with others its inexpressible riches.” (Be Not Afraid, pp. 125-126).

Pope John Paul II singled out only St. Louis and his treatise on True Devotion to Mary among all of the other teachers and works of Marian spirituality. (See Mother of the Redeemer, 48). He said, “The Marian dimension of the life of the disciple of Christ is expressed in a special way precisely through this filial entrusting to the Mother of Christ, which began with the testament of the Redeemer on Golgotha. Entrusting himself to Mary in a filial manner, the Christian, like the Apostle John welcomes the Mother of Christ into his own home and brings her into everything that makes up his inner life… .” (Mother of the Redeemer, 45).

He wrote,  “Consecrating ourselves to Mary means accepting her help to offer ourselves and the whole of mankind to Him who is holy, infinitely holy; it means accepting her help – by having recourse to her motherly heart which, beneath the Cross was open to love for every human being, for the whole world – in order to offer the world, the individual human being, mankind as a whole, and all the nations to Him who is infinitely holy.” (The Sun Danced at Fatima, Joseph Pelletier, Image Books, pp. 204 – 205.)

Pope John Paul II said, “As is known, in my episcopal coat of arms the motto ‘Totus Tuus’ is inspired by the doctrine of St. Louis-Marie Grignion de Montfort. These two words express total belonging to Jesus through Mary. ‘Totus tuus ego sum, et omnia mea tua sunt’, I am all yours, and everything of mine belongs to you, my beloved Jesus, through Mary, your holy Mother. Mary accompanies us in our pilgrimage of faith, hope and charity toward an ever more intense union with Christ, only Savior and Mediator of salvation – to find Jesus Christ perfectly, to love him tenderly, and to serve him faithfully.”

On Easter Sunday 2005, a week before he died, Pope John Paul II attempted to give his Easter Address in St. Peter’s Square. However, he stood motionless at the window and was unable to speak. He made the Sign of the Cross three times and waved to the great crowd gathered below. According to his personal secretary, Bishop Dziwisz, the Pope seemed sad and exhausted by his unsuccessful attempt to speak. He looked into his secretary’s eyes and said, “Maybe it would be better for me to die if I can’t fulfill the mission that has been entrusted to me. Thy will be done…. Totus Tuus.”

Bishop Dziwisz believed that Saint John Paul II was not expressing desperation, but submission to God’s will. This was the fulfillment of his Total Consecration to Jesus through Mary.

Learn more in my book The Call to Total Consecration to the Immaculate Heart of Mary.

Learn how to prepare in The Preparation for Total Consecration.