In the early 1990’s, the priest spiritual director of Jesus’ Secretary’s received the stigmata. Many healings occurred after he prayed for people, and images that he blessed, wept tears. This led to a great spread of the Devotion as the faith, hope and love of the people increased. 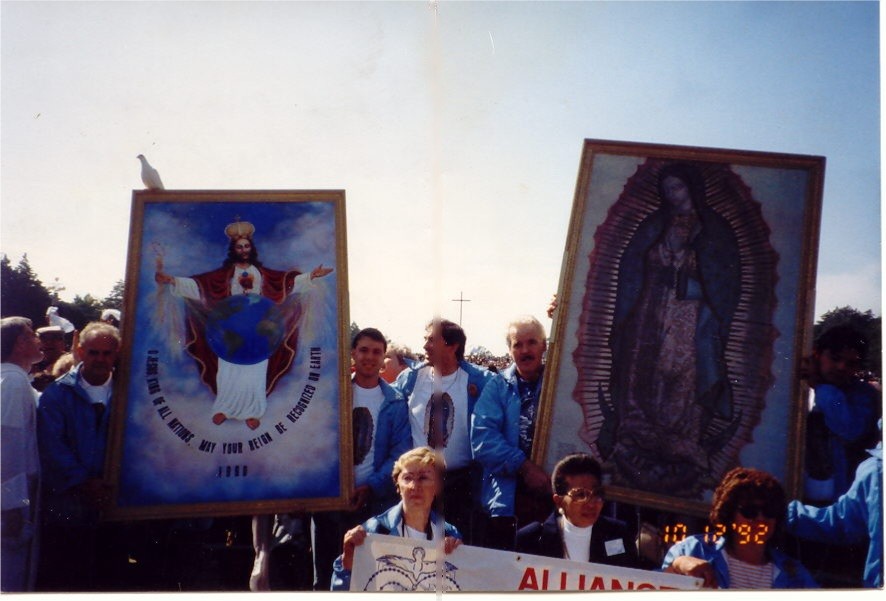 The Image itself often exuded a perfumed aroma from Jesus’ Sacred Heart and a dove alighted on it. On the 75th anniversary of the Fatima apparitions, two priests prophesied that a group of pilgrims there would see a dove as a sign that their pilgrimage to Russia would be safe. Soon after, a dove alighted on the Image. This was reminiscent of John the Baptist’s testimony, “I saw the Spirit come down like a dove from the sky and remain upon Him.” (Jn. 1:32). (See photo).

The Novena Prayer in Honor of Jesus as True King asks Him to “protect our families and the land of our birth, Guard us, we pray, Most Faithful One! Protect us from our enemies and from Your Just Judgment.”

Christina Nenntwich, a mother from Germany, prayed this Novena and received a miraculous cure for her son. She wrote, “My son Michael had been suffering from a disease of the head, arteriitis temporalis. This disease is very rare. In the entire world, only 40 people of his age group (30 years of age) suffer from it. Cures are extremely rare. I prayed much for him, since I also attend Mass every day. I was near despair, for he did not seem to get any better.”

“Then, for nine days I prayed the Novena in Honor of Jesus as True King and my son was freed from this disease. Out of gratitude for this favor, I promised to spread this Devotion. I urge everyone to pray this Novena. The Chaplet of Unity also reaches to the very depths of the soul. Please join me in recommending this Novena and Chaplet to every person, so that we may soon obtain the true peace on earth through Jesus and Mary.”

A sick woman felt her doctor’s words fall heavily upon her, “I’ll have to operate. The tumor is malignant and must be removed.” Her pain was terrible – almost unbearable – and eventually she fell to her knees and prayed the Devotion’s Chaplet of Unity for relief. Ten seconds after she finished praying, the tumor passed from her body. She called her doctor and told him the good news. After a long silent pause of disbelief he said, “Well, come on in and we’ll check it out.” To his great surprise, his examination showed no signs whatever of the tumor! Jesus promised to those who embraced His Devotion that He would “readily hear their petitions and prayers and pour out upon them His grace.”

Another sick woman suffered from uncontrollable tremors and prayed a Novena of Chaplets of Unity for her healing. On the ninth day of the Novena, she received the gift of tears as she prayed. She got up to wipe her tears and discovered that she could walk without any tremors! Her doctor declared it a miracle.

A daughter made the Novena of Communions for her elderly sick mother. Jesus promises nine special angels for the beneficiary of this Novena. Her mother had a vision of these angels at the end of the Novena after she had surgery that revealed her terminal cancer. Similarly, a nurse daughter prayed the Chaplet of Unity for her mother who was in a hopeless coma. Jesus promises many spiritual, physical, emotional and psychological healings for those who pray this prayer. Her mother recovered from the coma. Another woman was healed from cancerous breast tumors after the prayers of the Devotion were prayed.

A son prayed the Novena in honor of Jesus as True King for his father after he had been diagnosed three times with cancer. The doctors said that it would take several weeks for the results of the fourth diagnosis. However, they unexpectedly called on the last day of the Novena and reported that there was no indication whatsoever of any cancer.

A son received the Novena of Communions for his dying mother. As he received his ninth communion, she died in peace!

A homosexual man lay dying in a hospital from Aids. He was angry and swore that he would never be reconciled with Jesus or the Church. His mother prayed the prayers of the Devotion for his conversion. Soon thereafter he asked to see a priest who visited him, patiently listened to him and heard his Confession. He got well enough to leave the hospital and to testify to others that he would die as a chaste man and as a member of the Church and soon thereafter he died in peace.

Another homosexual man picked up the Devotion’s booklet in a bookstore in Australia. He was attracted to the promises of the Novena of Communions. He began them and right away began having doubts about his homosexual activity with his male friend with whom he had lived for the past eight years. He went to Confession during the Novena. Then he made the Novena for his friend and prayed that he too would doubt the morality of their homosexual activity. His partner surprised him by telling him that he wanted to stop their sexual activity and become a Catholic! They both became chaste Catholics.