Sex and the 2016 Election
Dan Lynch

It seems that the issues of the election of 2016 had much to do about sex. However, it was not about the sex of the candidates, male and female, and the potential first woman President, but about support for immoral sexual acts. “If all the fury directed at religious believers could be pressed into a single word, as it can, that word would … be sex.” (Mary Eberstadt, “The New Intolerance”, First Things).

Hillary Clinton supports the immoral sexual acts of same-sex relationships; public accommodations for those who claim to have changed their sex; abortion from conception to partial birth for the unwanted human beings conceived by sexual acts; and, against consciences and religious liberties, mandatory provision of services for celebrations of same-sex relationships; mandatory payment for contraceptive insurance coverage; mandatory payment for abortions from our taxes and mandatory requirements for doctors to perform or refer attempted sex-change operations. Mrs. Clinton said that “deep-seated cultural codes, religious beliefs and structural biases have to be changed.”

Mrs. Clinton’s response to those who opposed her support of immoral acts was not reasoned argument but simple name-calling. She said, “To just be grossly generalistic, you can put half of Trump supporters into what I call the basket of deplorables. Right? Racist, sexist, homophobic, xenophobic, Islamaphobic, you name it.”

Donald Trump wrote to the Catholic Leaders Conference, at which I spoke. He said:

I have a message for Catholics: I will be there for you. I will stand with you. I will fight for you.
I am, and will remain, pro-life. I will defend your religious liberties
and the right to fully and freely practice your religion, as
individuals, business owners and academic institutions.

As First Lady, US Senator, Secretary of State, and two-time
presidential candidate, Hillary Clinton has been hostile to the core
issues and policies of greatest concern to Catholics: life, religious
liberty, Supreme Court nominations, affordable and quality healthcare,
educational choice and home schooling.

You may read Donald Trump’s full letter to the Catholic Leadership Conference here.

Catholics, who comprise 25% of the voters, accepted Mr. Trump’s message and their votes, together with those of other people of goodwill, resulted in his election.

It seems that our society is divided by moral issues and not by political issues. Reasonable minds may differ on political issues and come to different, but moral, prudential judgments. Not so with moral issues which are absolute and can easily be known through the natural law that God implants in our hearts and by the exercise of right reason.
Our division is between light and darkness and between those who follow the light of God and those who stumble in the darkness of moral evil. It is a division between God and Caesar. Those who cried out for Jesus’ crucifixion said, “We have no King but Caesar!”  They did not recognize God as their true King. Neither do many today who call themselves liberals and progressives. Their king is the state and not God.

However, St. John tells us, “Anyone who is so “progressive” as not to remain in the teaching of the Christ does not have God; whoever remains in the teaching has the Father and the Son.” (2 John 9).

In fact, many “progressives” are secular humanists who believe only in this world in which humanity without God will try to make its own heaven on earth.

“Progressivism” is ideological, coercive, and ultimately opposed to the truth about human sexuality, marriage and the family. “Progressives” replace these truths with their ideology and attempt to use the state to further it with its mandatory sanctions. They act as if God does not exist. “They exchanged the truth of God for a lie and revered and worshiped the creature rather than the creator, who is blessed forever.” (Romans 1:25).

They are rebels against God who revealed himself in Jesus Christ and they will not serve him or his and his Church’ s teachings on the natural moral law about what we must do or not do in order to have eternal life and happiness with him. It seems that they are not progressing but regressing to the moral rebellion in the Garden of Eden.

The truth against the rebellious and morally evil practices of contraception, abortion, same-sex sexual relationships and transsexuality is simply revealed to us by God. In the Garden of Eden God created them male and female, two separate sexes. He did not create any so-called “transgender” sexes. He told the man and the woman, Adam and Eve, to unite and join together to become one flesh and to multiply. Union of husband and wife with an openness to new life is how he established true marriage and the family with its purpose for the procreation and education of children. 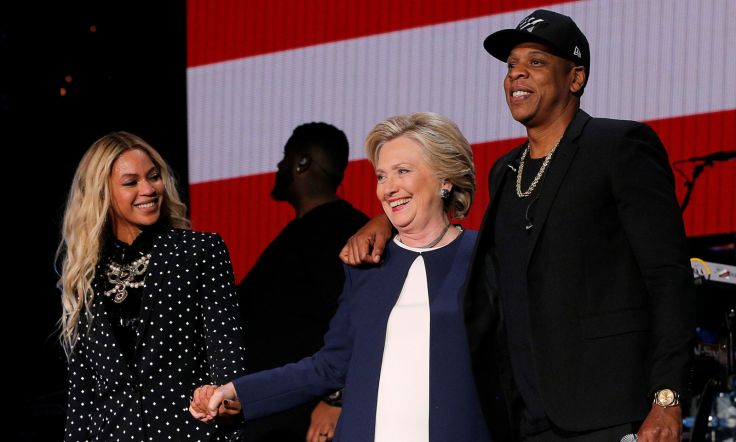 Some of the rebellious practices against these truths cause abuse against the dignity of women many of whom think that they are sexually liberated. However, many are in fact used and abused by men who treat them as objects and not as persons. Just one small example of this comes from the words of JayZ. He is a rapper who sang at a rally for Hillary Clinton without any later correction or comment from her about his lyrics.

His lyrics motivated my daughter, Maggie Eisenbarth, who gave birth to Fletcher, her ninth child, two days after the election, to post the following on Facebook on election eve:

Seriously! Last night I was curious enough to watch JayZ, some other rapper and Beyonce at some free Hillary concert/rally and I couldn’t believe what I was hearing. A lot of “eff this and N%$#@ that”, and to really make it sweet and to get thanks from Hillary was, “…bringin’ back 5 or 6 hoe, @#$% them, then we kick em… she deserved that…” It was grotesque, dark and evil. Raise the bar country! Raise your children on the Truth.

In response to Hillary’s supporters who didn’t acknowledge his abusive lyrics, Maggie wrote,

No woman will ever be free as long as we allow and condone men referring to us as hoes and reference abusing us. It’s not complicated, it’s wrong. It is not music. If you’re not going to wonder what Hillary is all about when this is what she chooses to represent, then don’t play the same game with others. It is hypocrisy. I think our country and our children deserve the Truth, deserve light, deserve goodness, deserve to grow and be nurtured absent vulgarity, profanity and evil. I believe in a better day, a better America. Would Allison Krauss please come forward and sing for us all now, that would make me happy, that and honoring God in our country.

Maggie’s post exemplifies the division in our society between light and darkness. Let us pray a novena to Our Lady of America for her to mediate a river of the light of God to our society. May this light penetrate and melt the hearts of the secular humanists who support moral evils and turn them to God who lovingly waits for them to receive his mercy. His merciful arms are wide enough to embrace all repentant people of good will and to forgive them so that they may have eternal life and happiness with him.

However, it seems that their minds and hearts have been made dull and hardened and that God has placed a veil over them so that they cannot understand and accept the moral truths of life, marriage and the family. It seems that this veil will not be removed unless and until they turn from the idols that they have created of their own enlightenment and sexual revolution and accept these moral truths.

Let us pray that secular humanists come to know the truth, the love and the mercy of the one true God. He tells us that, “if then my people, upon whom my name has been pronounced, humble themselves and pray, and seek my face and turn from their evil ways, I will hear them from heaven and pardon their sins and heal their land.” (2 Chronicles 7:14).

Let us be hopeful! What St. John Paul II wrote to Europe, also applies to the United States. “Be certain! The Gospel of hope does not disappoint! Throughout the vicissitudes of your history, yesterday and today, it is the light which illumines and directs your way; it is the strength which sustains you in trials; it is the prophecy of a new world; it is the sign of a new beginning; it is the invitation to everyone to blaze new trails in order to make the continent a true common home filled with the joy of life.” (John Paul II, Ecclesia in Europa, 121).