“Today the Church needs saints. This calls for our combating our attachment to comforts that lead us to choose a comfortable and insignificant mediocrity. Each one of us has the possibility to be a saint, and the way to holiness is prayer. Holiness is, for each of us, a simple duty.”  ~St. Mother Teresa

January 23 is the feast of one of our saints of the states, St. Marianne Cope. Let our nation turn its lonely eyes to her for courage and hope. She was born Barbara Koob in Germany in 1838. She immigrated to Utica, New York, as a child and worked in a woolen factory for nine years before joining the Franciscans in 1862. In 1883, she arrived in Honolulu, Hawaii, with six of her Sisters. They expected to travel on to Molokai to help St. Damien de Veuster minister to the lepers. 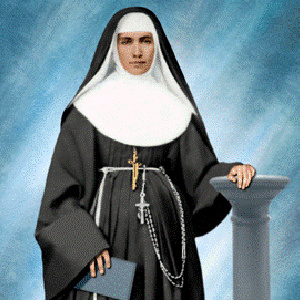 Her first service was as a schoolteacher but she soon became nurse-administrator of the Franciscans’ hospital in Syracuse, which introduced new standards of cleanliness. Seven years later she was elected Provincial Superior of her Order.

After Mother Marianne and her Sisters settled in Honolulu, the Board of Health decided that they should not serve the lepers on Molokai, but should begin their work with those lepers who were at the Branch Hospital in Honolulu.

This “hospital” was actually a collection of poorly built wooden buildings located on a salt marsh which often flooded. The few attendants treated the lepers as prisoners. There were no sanitary facilities and the stench was vile. The nuns brought order and cleanliness and three years later welcomed Father Damien as a patient and provided him with the luxury of sheets for the first time in years.

The nuns wept at the pitiable state of Father’s disfigurement and treated him with the utmost care helping him with newly invented baths. Unfortunately, Father had little patience with their constant care or with spending time bathing. He worried about the lepers on the island of Molokai and returned there within two weeks.

On November 14, 1888, Mother Marianne and two other nuns finally landed at Molokai to care for the female lepers. As Father Damien had done before them, they washed and bandaged the lepers’ wounds.

One day one of her Sisters asked her, “Mother, what will you do with me if I become a leper?” Mother calmly answered, “You will never become a leper. I know we are all exposed, and I know, too, that God has called us for this work. If we are present, and do our duty, He will protect us. Do not allow it to trouble you, and when the thought comes to you, drive it from your mind. Child, remember, you will never be a leper, nor will any Sister of our Order.” This proved to be a prophecy that time fulfilled. No Franciscan Sister at Molokai ever contracted leprosy.

Mother Marianne came to the Hawaiian Islands for an expected short period, but she stayed there until her death at age 80, on August 9, 1918, after 35 years of service. In 1889 she wrote to her Superior in Syracuse, “Will I ever see those I love again? God’s will be done.”

Soon after Mother Marianne died, a woman wrote in the Honolulu Advertiser, “Seldom has the opportunity come to a woman to devote every hour of 30 years to the mothering of people isolated by law from the rest of the world. She risked her own life in all that time, faced everything with unflinching courage and smiled sweetly through it all.”

Pope Benedict XVI canonized Mother Marianne on October 21, 2012. In his homily he said that at a time when very little could be done to treat people with Hansen’s disease, commonly called leprosy, “Marianne Cope showed the highest love, courage and enthusiasm. She is a shining example of the tradition of Catholic nursing sisters and of the spirit of her beloved St. Francis.”

Leading a group of Hawaiian pilgrims, including nine leper patient-residents from Kalaupapa, where St. Marianne ministered, Honolulu Bishop Larry Silva said St. Marianne is “an inspiration for those who care for those most in need, which is what all Christians are called to do. Now, with universal veneration, she can inspire people around the world.”

You may read the full story of her life in my book Saints of the States.