“Today the Church needs saints. This calls for our combating our attachment to comforts that lead us to choose a comfortable and insignificant mediocrity. Each one of us has the possibility to be a saint, and the way to holiness is prayer. Holiness is, for each of us, a simple duty.” St. Mother Teresa

July 14 is the feast of one of our saints of the states, St. Kateri Tekakwitha. Let our nation turn its lonely eyes to her for courage and hope. Pope Benedict XVI canonized her at St. Peter’s square in Vatican City October 21, 2012.

The blood of the martyrs is often the water that sprouts the seed of the Catholic faith. The blood of the only martyrs of the United States, Saints Isaac Jogues, Rene Goupil and Jean de la Lande, watered the seed of the faith in the Mohawk Village at Auriesville, New York. Kateri Tekakwitha was born there in 1656, ten years after they were martyred there.
Kateri’s Baptism
Kateri lived in the Mohawk Village with her uncle, the chief of the Turtle Clan, after her parents died from smallpox when she was four. The smallpox left her disfigured with impaired vision. “Tekakwitha” in Mohawk means “one who puts things in order” or “one who feels her way”, because Kateri had to feel her way with her poor eyesight in the darkened lodges. She often stayed in the Longhouse because the sunlight hurt her eyes. 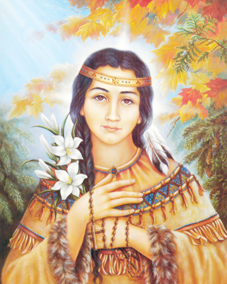 She fell in love with Jesus and decided to remain a virgin. Virginity was unheard of amongst the Indians and they pressured her to marry and to work on Sunday, but she refused to do so. When they connived to have her lodge visited by a young warrior in the hopes of their union, she turned him out. Then the Indians treated her as a slave and put her to work for the village.

In 1666, the French attacked and burned down Kateri’s village. The Mohawks built a new village on the north side of the Mohawk River at Fonda (Caughnawaga), New York. Here Kateri first heard of the Catholic faith from Father Jacques de Lamberville, a French Jesuit, who occasionally visited her village at St. Peter’s Mission. He baptized her on April 18, 1676 and she took the name Catherine that the Mohawks pronounced “Kateri”.

The other Mohawks persecuted her for her faith. They mocked her devotion to Our Lady and her recitation of the Rosary. Kateri was not deterred, but to avoid the persecution she escaped in 1677 with some companions from the village to Canada. She trekked north through New York and paddled Lake Champlain to Sault Saint-Louis, a Christian Indian Mission near Montreal on the St. Lawrence River. Her journey took over two weeks, traveling by foot and canoe about three hundred miles through woods, rivers, swamps and lakes.
The Lily of the Mohawks
At the Mission, Kateri lived a life dedicated to prayer, penitential practices and care for the sick and aged. Her day at the Mission began at 4 a.m. each morning in church where she remained for several hours of prayer and Masses. She helped the sick and the poor. She formed a group called the Slavery of the Blessed Virgin and they fasted and endured exposure to the cold in the woods as acts of penance. On March 25, 1679, Kateri was permitted to make a vow of perpetual virginity.

Kateri was a half-blind, pockmarked orphan Indian maiden. She was little more than a slave in her own clan, but in God’s eyes she was His pure daughter and a model for her race. Many Indians followed her good example and converted. Kateri received the Eucharist with the greatest devotion. Father Pierre Cholenec, who prepared her for her First Communion said, “Only God knows what passed between Himself and His dear Spouse.”

Kateri attended daily Masses at 5 a.m. and 7 a.m. and visited the Blessed Sacrament five times daily, after her daily visitations to the sick and the poor. During her own last sickness, she dragged herself to Mass until she could no longer walk. She died at the age of 24 on April 17, 1680 in the presence of Father Cholenec and all of her pox marks disappeared. He said that at the time of her death Kateri’s face “… so disfigured and so swarthy in life, suddenly changed about fifteen minutes after her death, and in an instant became so beautiful and so fair that just as soon as I saw it (I was praying by her side) I let out a yell, I was so astonished.”

Two hundred and ninety three years later on the very same date, April 17, 1973, young Peter McCauley’s hearing was spontaneously restored through Kateri’s intercession. This was the miracle that led to her beatification by Pope John Paul II on June 22, 1980.

Pope Benedict XVI canonized Kateri on October 21, 2012. He called St. Kateri the “protectress of Canada and the first Native American saint” and he entrusted to her “the renewal of the faith in the First Nations and in all of North America.”

Archbishop Charles J. Chaput of Philadelphia, who is of American Indian descent, said, “I think many young people today are embarrassed about embracing the Catholic faith because they live in a secular culture that’s hostile toward religious experience. St. Kateri also grew up in a place where there was great hostility toward Christianity, but she resisted all efforts to turn her away from her faith, so in some ways she would be a model of fidelity in the face of persecution on religious freedom grounds.”

Kateri’s Feast Day is July 14. Because of her purity, she is known as the “Lily of the Mohawks.”

To learn more about St. Kateri Tekakwitha and all of the American Saints and Blesseds, you may read my book, Saints of the States. You may order it by clicking here.

St. John Paul II requested this book. He said we need, “a collection of short biographies of the Saints and the Beatified of America, which can shed light on and stimulate the response to the universal call to holiness in America.” (Pope John Paul II, The Church in America).

Many of our supporters take well-deserved summer vacations, which causes our support to reach its lowest levels of the year.

So, we would really appreciate your help to keep our Missionary Images of Our Lady of Guadalupe, Jesus King of All Nations and Our Lady of America on their Visitations throughout America.

But, in order to continue this amazing work for the greater glory of God, we must raise $90,735 by the Feast of St. Michael the Archangel, September 29. This is just for our normal quarterly operating expenses of maintaining our Apostolates’ Center and paying our modest salaries. There is no surplus in our budget, which does not include any special projects, needs, or savings.

Don’t forget, we remember you. Our benefactors receive the following spiritual benefits from our Apostolates: our intercession for your Prayer Petitions (click here to make your Prayer Petitions) in our daily Chaplets; in our Rosaries and perpetual Novenas; in our weekly Holy Hour before the Blessed Sacrament and in our special monthly Masses for your intentions. Thank you for your donation today!

Thank you for remembering us.

Please click here to learn how your donations support our mission.

You can make a difference. Please click here to donate today!