December 9 is the Feast of St. Juan Diego. He was born in 1474, eighteen years before Columbus discovered America. He was born in the village of Cuautitlan, Mexico located 14 miles north of Tenochtitlan, now Mexico City. He was a Chicameca of the Family of Texcoco. His Indian name was Cuauhtlatoatzin that means “He who talks like an eagle”.

Juan received an early education and was later married and had children. He was a landowner, a small farmer and was involved in textile manufacturing. He converted to Christianity between 1524-25 and was baptized, together with his wife, Maria Lucia, by the Franciscan missionary Friar Toribio de Benavente. Maria died in 1529 and Juan became a widower.

Juan lived in Mexico before and after the Spanish Conquest of 1521 and before the establishment of Jamestown, Virginia, the first permanent English colony, in 1607. The Conquest was an apocalyptic event for the indigenous peoples. They lost their freedom, their land, their religion, their culture, their society and their great city of Tenochtitlan. Juan’s life bridged two cultures from the pre-Conquest worship of false gods and the human sacrifices made to appease them to the post-Conquest worship of the One True God and the end of human sacrifice.

Juan’s tribal family of the Chicamecas were part of the Triple Alliance with the Aztecs (Mexicas) and the Tlacopans. However, the Aztec Emperor, Montezuma, assumed total control and made enmities of the other tribes. They later allied with the Spanish in the Conquest of 1521.

Ten years after the Conquest on December 9, 1531, 57-year-old Juan, a recent widower, began his nine-mile walk from his home in Tolpetlac probably to Tlaltelolco near Mexico City “in pursuit of God and His commandments”, according to the Nican Mopohua, the earliest account of the apparitions written in 1545. Juan was walking to attend Mass and catechetical instructions.

Our Lady of Guadalupe appeared to Juan as he walked near Tepeyac Hill that was the former site of worship to the Aztec goddess Tonantzin. In a series of apparitions between December 9 and December 12 she identified herself as “the perfect and perpetual Virgin Mary, Mother of the only true God in whom we live . . . .” She entrusted to him a mission to request Bishop Zumarraga to build a church on the hill so that she could manifest her Son to all of the people. 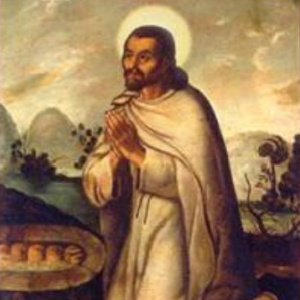 Twice the Bishop politely rebuffed Juan. He prudently requested a sign from Our Lady so as to believe her request for him to build the church.

Our Lady promised to give Juan the sign on December 11. However, on the appointed day Juan cared for his dying uncle, Juan Bernardino, and he stayed with him. On December 12, he left his uncle to get a priest to give him the last rites. As he approached Tepeyac Hill, Our Lady intercepted him and told him not to worry, that his uncle was well.

Our Lady told Juan to go up to the top of the hill and cut and gather the flowers there. Juan obediently did so and found miraculous flowers growing in the middle of the frosty season that included Castilian roses that were native to the Bishop’s homeland in Spain. He put them together and returned to Our Lady. She helped to place the flowers in his tilma (cloak) and said that they were “the sign to take to the Bishop. Tell him, in my name, that in them he will recognize my will and that he must fulfill it. You will be my ambassador, fully worthy of my confidence.” 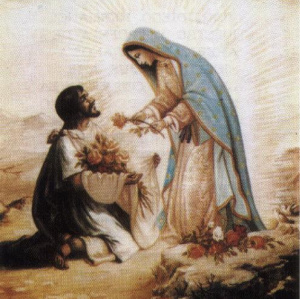 For the third time, Juan requested the Bishop to build the church. He said, “Here is your sign,” opened his tilma and the roses fell. At that moment the image of Our Lady of Guadalupe miraculously appeared on his tilma. The Bishop believed, the church was built, the miraculous tilma was displayed for the people’s veneration and it is still displayed today in the Basilica near Tepeyac Hill. 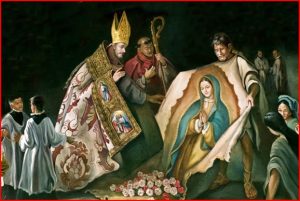 Our Lady was true to her promise and manifested her Son to the millions of indigenous people who converted to Him. For the next seventeen years Juan lived as a humble hermit in a hermitage at the base of Tepeyac Hill and cared for the nearby church that housed the tilma.

Because Juan was learned in Nahuatl and Christian doctrine, he was able to explain the Miraculous Image on the tilma that spoke to the natives as a pictograph. He explained its significance and the story of the apparitions over and over again. He spent hours in prayer to Jesus and Mary and cared for her Image. He lived a life of poverty, chastity and obedience and was revered by all. He was Our Lady’s messenger, “The Talking Eagle”, to the day he died.

He died at the age of 74 in 1548 almost a century before the Mayflower landed at Plymouth Rock. He was probably buried in his hermitage next to the church that he had cared for so well.

At Juan’s canonization Mass, St. John Paul II remarked on the formation of the Mexican people and said,

In accepting the Christian message without forgoing his indigenous identity, Juan Diego discovered the profound truth of the new humanity, in which all are called to be children of God. Thus he facilitated the fruitful meeting of two worlds and became the catalyst for the new Mexican identity, closely united to Our Lady of Guadalupe, whose mestizo face expresses her spiritual motherhood that embraces all Mexicans.

Before his final blessing, the Holy Father said, “You have now in your new saint a remarkable example of holiness. . . . May he be a model for you and others that you may also be holy.”

You may read the full story of his life in my book Saints of the States. Please click HERE and order your book today.