Home » Saint Isaac Jogues and His Companions, America’s Only Martyrs

Saint Isaac Jogues and His Companions, America’s Only Martyrs

“Today the Church needs saints. This calls for our combating our attachment to comforts that lead us to choose a comfortable and insignificant mediocrity. Each one of us has the possibility to be a saint, and the way to holiness is prayer. Holiness is, for each of us, a simple duty.”  St. Mother Teresa
Simon and Garfunkel sang Mrs. Robinson, the classic song from the movie The Graduate. They lamented the lack of American heroes and sang, “Where have you gone, Joe DiMaggio? A nation turns its lonely eyes to you.”
The true American heroes are not sport or entertainment figures, but Catholic saints. We should turn our “lonely eyes” to them and follow their good examples, virtues and works. They are our true friends and are alive in heaven with God. They are models of holiness for us. They can help us just like friends on earth by their prayerful intercession on our behalf. They give us courage and hope.

October 19th is the Memorial of the North American martyrs, including Isaac Jogues, Rene Goupil and John de la Lande, the only martyrs in what is now the United States of America. This is their story.

Twelve canoes paddled slowly and cautiously along the marshy shore of the St. Lawrence River on August 2, 1642. The eyes of the paddlers swept the waist-high marsh grass. They were Huron Indians led by their great Chief Eustace together with some Frenchmen including Fr. Isaac Jogues and Rene Goupil. They were on their way to bring missionaries and supplies to nourish the lives and Christian faith of the Huron Mission in New France.

Suddenly, the quiet early morning air was pierced with wild war whoops as Mohawk warriors with grotesquely painted faces and bodies streaked with blood-red paint stood above the grass and fired their muskets. The Hurons had no guns, but returned fire with a volley of arrows. Above the din of battle the voice of Eustace rose, “Great God, to you alone do I look for help.” 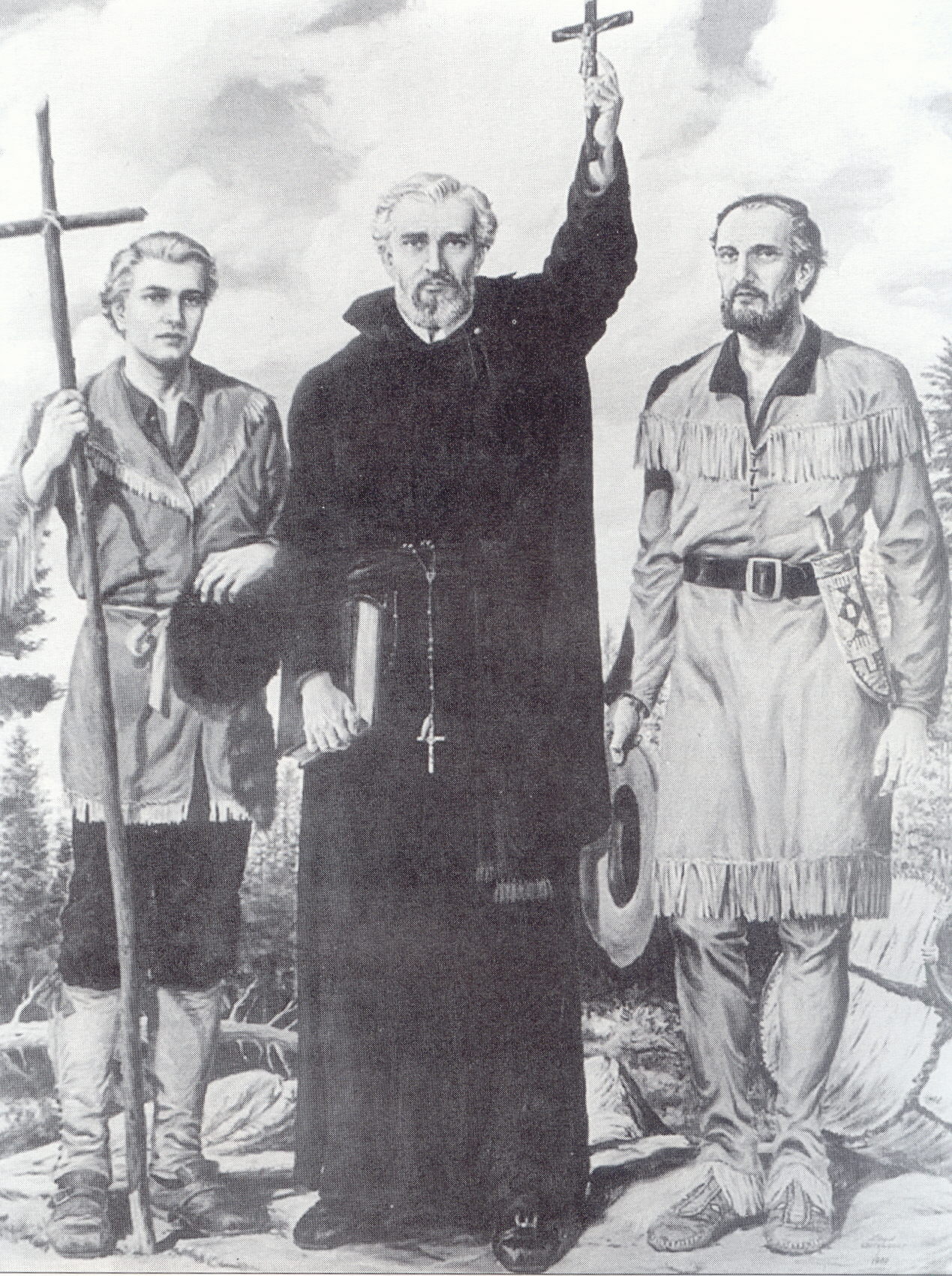 Father Jogues made the Sign of the Cross and shouted the words of absolution over his companions. Then his canoe smashed against the shore and he was catapulted into the marsh that concealed him. He watched as his outnumbered companions were killed or captured. He could have escaped but, like Jesus in the Garden of Gethsemane, he surrendered himself.

Rene Goupil was a young Frenchman who had failed to be admitted to the Jesuits because of poor health. Nevertheless, he studied medicine and came to Canada to help the missionaries.

The captives were forced into the Mohawk canoe flotilla that paddled south from the St. Lawrence River down the Richelieu River (River of the Iroquois) and Lake Champlain. They were brought south to the Mohawk Village at Auriesville, New York (Ossernenon). It was located 40 miles west of Albany (Fort Orange), New York on a bluff overlooking the Mohawk River.Father Jogues and Rene Goupil were cruelly tortured, including the mangling of Father’s fingers from the gnawing teeth of the Mohawks. They lived in slavery in the village for 13 months. One day an Indian observed Rene making the Sign of the Cross on the head of an Indian girl. The superstitious Indians thought that it would bring them bad medicine so they brutally tomahawked Rene on the head from behind. Father Jogues was nearby. He took the dying man in his arms and gave him the sacrament of the Anointing of the Sick (Extreme Unction) before he died. Father Jogues wrote of Rene’s death, “Thus on the 28th of September [1642] this angel of innocence and martyr of Jesus Christ was immolated in his thirty-fifth year, for Him who had given His life for his ransom. He had consecrated his heart and soul to God and his life and labor to the welfare of the poor Indians.”

Father Jogues’ slavery continued. Francis Parkman wrote, “He would sometimes escape and wander in the forest, telling his beads and repeating passages of Scripture. In a remote and lonely spot, he cut the bark in the form of a cross from the trunk of a great tree; and here he made his prayers.”

His days were passed in menial work, learning the language, and comforting Huron prisoners who were sometimes brought in. As opportunity offered, he baptized children he found dying. During the year, he baptized some seventy persons, New York State’s first Catholic baptismal record. He was taken on fishing and hunting expeditions, where he suffered much from hunger and exposure. On one of their fishing expeditions, the Mohawks took Father Jogues down river to the Dutch settlement at Albany.

When Father arrived at Albany, the Dutch helped him to escape and obtain passage down the Hudson River to New York City (New Amsterdam) and from there back to France.

The news of his return spread quickly and Father Jogues was honored by the Queen Regent, the mother of King Louis XIV. He also received special permission to celebrate Mass with the stumps of his fingers. When Pope Urban VII granted this exceptional privilege, he said, “It would be unjust that a martyr for Christ should not drink the blood of Christ.”

Return to Canada
Father Jogues’ only desire was to get back to Canada and, in June 1644, he was again in Quebec. Eventually, he asked to be sent back to the Mohawks as a missionary. After much hesitation, his superiors agreed to his request. On September 27th, he began his last journey to the Mohawks.
Missionary to the Mohawks

Unknown to Father Jogues, an epidemic had broken out in the Mohawk Village, caterpillars had eaten the crops and there was a threat of famine. The Mohawks blamed Father Jogues because he had left with them a mysterious box. He had showed them its contents, which consisted of personal necessaries, but he had locked it up and asked them to keep it. The Mohawks thought that a demon was concealed in the box, to bring upon them all manner of evils. They threw the box into the river.

In a letter to a friend written shortly before his last mission to the Mohawks, Father wrote,

My heart tells me that if I have the happiness of being employed in this mission, Ibo Et non redibo (I shall go and shall not return); but I shall be happy if our Lord will complete the sacrifice where He has begun it, and make the little blood I have shed in that land the earnest of what I would give from every vein of my body and my heart.

In a word, this people is “a bloody spouse” to me (Exodus iv, 25). May our good Master, who has purchased them in His blood, open to them the door of His Gospel, as well as to the four allied nations near them.

Father Jogues was completely unaware of the mounting tension and antagonism in the Mohawk village. He and Jean de la Lande, a lay missionary, once more started south for Auriesville. On the trail, near Lake George, a party of Mohawks captured them. They stripped Father naked, slashed him with their knives, beat him and then led him and Jean on to their village.

At Auriesville, Father’s arguments seemed to affect his hearers. “I am a man like yourselves,” he replied to their charges. “I do not fear death or torture. I do not know why you wish to kill me. I come here to confirm the peace and show you the way to Heaven, and you treat me like a dog.” In the councils, the majority were ready to give him his freedom, but the minority, members of the Bear clan, took matters into their own hands.

Martyrdom
They invited Father to pay them a visit. As he unsuspectingly entered the cabin of the Bear chief, he was brutally tomahawked on October 18, 1646. The next day, Jean met the same fate. Both bodies were thrown into a nearby ravine. Their heads were cut off and placed on poles facing the trail by which they had come, as if in warning to other Blackrobes. When the news of the martyrdom was carried to Albany, the Dutch pastor hastened to Auriesville to denounce the Mohawks for their crime. Later on some of the Indians went to Albany with Father’s breviary, missal, and cassock, hoping to make a profitable trade, and the pastor again censured them.
Mohawks on the Warpath

Once more, the Mohawks began to attack and plunder the Huron villages in Canada. They spared no one. Fathers Garnier, Daniel, Gabriel, Lalemant, and de Brebeuf were martyred. But in the Mohawk Valley, the example of Father Jogues’ heroism was not forgotten. The gentle priest had possessed in a high degree the virtue the Indians admired most, bravery. Some years later, when there was peace, the three Jesuit priests sent from Canada to establish the Mission of the Martyrs were well received. Before long, Mohawk converts were traveling to the seminary in Quebec to be trained as Christian leaders.Father Isaac Jogues was declared a martyr and canonized as a saint by Pope Pius XI on June 29, 1930 together with the seven other North American martyrs – Rene Goupil, Jean de la Lande and Fathers Jean de Brebeuf, Gabriel Lalemant, Charles Garnier, Antoine Daniel and Noel Chabanel. Their collective feast day is October 19.

To learn more about St. Isaac Jogues, his companions and all of the American Saints and Blesseds, you may read my book, Saints of the States. You may order it by clicking here. 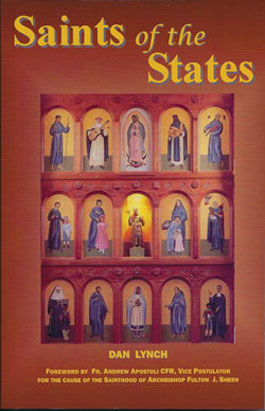