“Today the Church needs saints. This calls for our combating our attachment to comforts that lead us to choose a comfortable and insignificant mediocrity. Each one of us has the possibility to be a saint, and the way to holiness is prayer. Holiness is, for each of us, a simple duty.”  St. Mother Teresa

November 13 is the feast of one of our saints of the states, St. Frances Xavier Cabrini, foundress of the Missionary Sisters of the Sacred Heart of Jesus. Let our nation turn its lonely eyes to her for courage and hope. 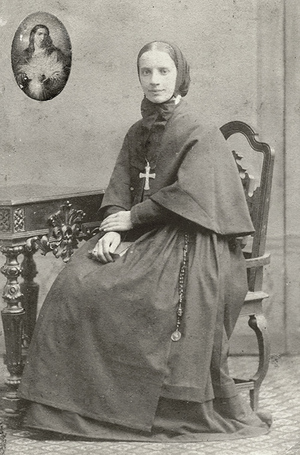 The small young nun with beautiful large blue eyes entered the presence of the elderly Pope Leo XIII. She knelt before him and told him of her ambition to go to China. He shook his head and said, “No, not to the East, my daughter, but to the West.” He decided that Mother Francis Cabrini should go to the United States and not to China. This began a missionary service that resulted in the largest number of missionary foundations in the United States. 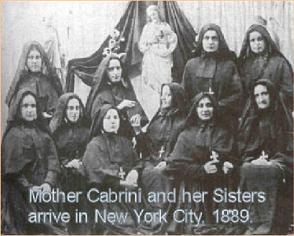 Before he became Pope Pius XI and beatified Mother in 1938, Achille Ratti once remarked to his housekeeper and asked her a question that applies to everyone. “Did you see that little nun who came for advice here? She has crossed the Atlantic Ocean more than twenty times; she has also founded many institutions of charity in Europe and the United States of America. A great missionary, yes, and a saint! And what have we done, for the glory of God during our whole lifetime?”

On July 7, 1946, the day of her canonization, Samuel Cardinal Stritch of Chicago said,

She was not a humanitarian; she was a heroic lover of God. In her missions of charity, in her achievement of the impossible, it was not genius; her secret was Divine Love. This is the wonderful story – a romance that is gripping and striking. It is the story of a woman who lived among us, who saw the things which we see, a woman in whose soul Divine Love had consumed the last remnant of self, who came to love only God, and who saw God in every poor man, woman and child. She loved us. She was our benefactor. She went begging in our streets. She rode our street cars. Through alleys she went in search of little hungry children who were homeless and friendless.

Our Saint issues a challenge to each of us, no matter how gloomy the world about us may be; we can smile the serene smile of our Saint.

After her canonization, Pope Pius XII spoke to some American pilgrims and described Mother Cabrini’s life as “a vast, marvelous epic of struggles and victories.” “Crossing oceans and continents,” he said, “conquering the world for Christ, she could say, ‘The world is too small to satisfy my desires.’ ”

In 1996, on the 50th anniversary of her canonization, Pope John Paul II called Mother Cabrini “Missionary of the New Evangelization.”

Mother Cabrini’s intercession is necessary in the New Evangelization particularly for the many immigrants still coming to the United States from foreign lands. They come as refugees from persecution, poverty, war and famine. Mother wrote in one of her letters a prophecy of her intercession for them and for us, “In the adorable Heart of Jesus, I can always find you. He is our comfort, our way, our life. To Him I shall confide all your needs. I will speak to Him of each one of you in particular. I know the wants of every one of you. I will take a great interest in you and keep you close to my heart – you may be sure of this.”

You may read the full story of her life in my book Saints of the States. Please click here and order your copy today!