Home » President Obama Fiddles While Christians and Their Churches Burn

President Obama Fiddles While Christians and Their Churches Burn

“We are now standing in the face of the greatest historical confrontation humanity has gone through. I do not think that wide circles of American society or wide circles of the Christian community realize this fully. We are now facing the final confrontation between the Church and the Anti-Church, of the Gospel versus the anti-Gospel.” (Karol Cardinal Wojtyla, later St. Pope John Paul II, November 9, 1976). 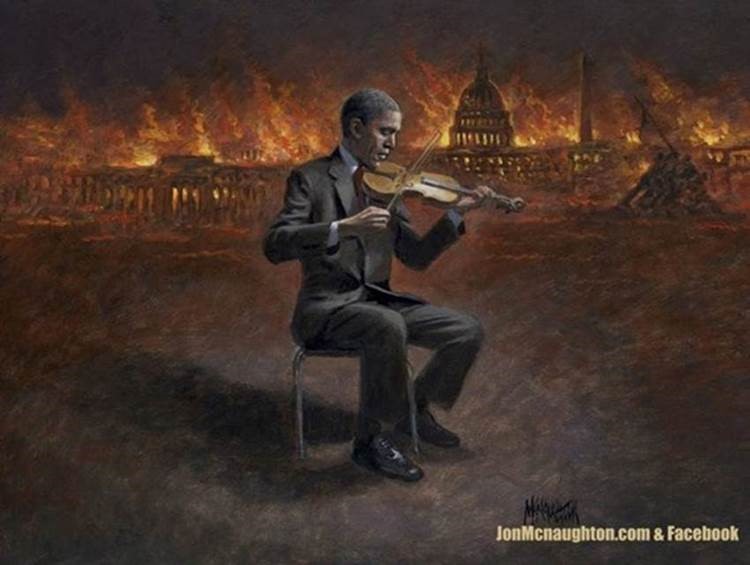 However, the summit did not address militant Muslims. Franklin Graham said, “His mother was married to a Muslim. His father was a Muslim. Then she married a man from Indonesia. He was raised in Indonesia. Went to Islamic schools. I assume she was a Muslim. So his whole life, his experiences have been surrounded by Islam. He only knows Islam. And he has given a pass to Islam.”

Princeton scholar Bernard Haykel regards the claim that militant Muslims have distorted the texts of Islam as extremely ignorant. “People want to absolve Islam,” he said. “It’s this ‘Islam is a religion of peace’ mantra. As if there is such a thing as ‘Islam’! It’s what Muslims do, and how they interpret their texts.”

While militant Muslims do not represent the majority of Muslims, their ideology is rooted in fundamentalist interpretations of Islam and the Quran.

The President apparently sees terrorists as victims of poverty and lack of education. He seems to think that they are angry because of this and act it out through terrorism. He made no mention of their motivation stemming from their Islamic ideology. He seems to have more compassion for the terrorists than for their victims whom he hardly mentioned.

President Obama said, “We have to address grievances terrorists exploit, including economic grievances.” He also said that we are “not at war with Islam.” So, apparently, he has no strategy to defeat militant Muslims. Apparently, he believes that they are not products of religion, but products of poverty and lack of education. But is this true? No!

Psychiatrist Marc Sageman, a former CIA case officer, wrote Understanding Terror Networks. He reviewed the backgrounds of 172 militant Muslims and found that almost half of them were professionals and that two-thirds of them were either middle or upper class.

Before 9/11, Osama bin Laden made two Declarations of War on the United States and its allies. He instructed Muslims everywhere on what their duty was and what to do. He wrote, “The ruling to kill the Americans and their allies – civilians and military – is an individual duty for every Muslim who can do it in any country in which it is possible to do it, …”

In November, militant Muslims released a video tracing its origins to Osama bin Laden. Later, Adnani, their spokesman, said, “We will conquer your Rome, break your crosses, and enslave your women.”

As we begin Lent, let us defend ourselves against the threats of militant Muslims and turn to our spiritual weapons of prayer, fasting, almsgiving and works of mercy to bring God’s grace for life, peace and protection.

Cardinal Dolan said, “Lent is a season of deep prayer, penance and solidarity with the oppressed and suffering, offering people everywhere an opportunity to unite with the persecuted Christians around the world. This massacre [of beheadings by militant Muslims] leaves us not only with ashes on our foreheads, but with tears in our eyes, a lump in our throat and a burning in our heart.”

Let us turn to Our Lady of Guadalupe to dry our tears and set our hearts on fire for peace and the conversion of the militant Muslims to the one true God.

Instead of meeting with the Joint Chiefs of Staff to get the value of their military expertise and recommendations to protect innocent Christians and to defend them from militant Muslims, President Obama seems to simply fiddle around with his mistaken ideas of what they believe and what they want, which is to conquer the world! What can we do while he fiddles?

Let us imitate Pope Pius V and begin a new spiritual Rosary Crusade for peace. Let each of us turn to Our Lady of Guadalupe and make a pledge to her that we will pray at least one Rosary per week through her intercession for the intentions of peace and the conversion of militant Muslims to the one true God.

Pope Francis said, “The blood of our Christian brothers and sisters is a testimony which cries out.

I read about the execution of those twenty-one Coptic Christians. Their only words were: ‘Jesus, help me! They were killed simply for the fact that they were Christians. … It makes no difference whether they be Catholics, Orthodox, Copts or Protestants. They are Christians! Their blood is one and the same. Their blood confesses Christ. As we recall these brothers and sisters who died only because they confessed Christ, I ask that we encourage each another to go forward with this ecumenism which is giving us strength, the ecumenism of blood. The martyrs belong to all Christians.”

Also, please host Visitations of the image of our Lady of Guadalupe and pray Holy Hours for Life, Peace and Protection. Click here to learn how.

Please click here to get your Holy Hour booklets.