Cardinal Wilton Gregory, Archbishop of Washington, Said That He Would Not Deny Communion to President Biden

Theodosius was the last Emperor of the undivided Roman Empire from 379 to 395. In April 390, the citizens of Thessalonica, Macedonia, had gathered in the circus of their town. Because of some prior sedition in the town, the Emperor’s troops slaughtered the innocent citizens in the circus. Approximately 7,000 men, women and children were massacred.

St. Ambrose, Bishop of Milan, Italy, sent Theodosius a letter and wrote that the Emperor had to repent for the massacre and that he would be forbidden from receiving the Holy Eucharist until he had done so.

Ambrose wrote, “If you listen obediently to this, and say, ‘I have sinned against the Lord;’ if you repeat those words of the royal prophet [King David], ‘O come let us worship and fall down before Him, and mourn before the Lord our God. Who made us;’ it shall be said to you also, ‘Since thou repentest, the Lord putteth away thy sin, and thou shalt not die.’ …

“It is no matter of wonder that a man should sin, but this is reprehensible, if he does not recognize that he has erred, and humble himself before God. …

“I have written this, not in order to confound you, but that the examples of these kings may stir you up to put away this sin from your Kingdom, for you will do it away by humbling your soul before God. You are a man, and it has come upon you, conquer it. Sin is not done away but by tears and penitence. …

“I dare not offer the sacrifice [the Holy Eucharist] if you intend to be present.” (Medieval Sourcebook, Letter 51).

Theodosius humbled himself and repented, and Ambrose openly re-admitted him to receive the Holy Eucharist. 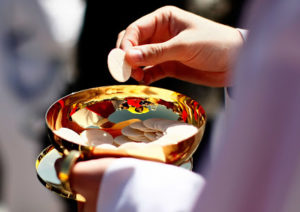 Bishop Ambrose and the Repentant Theodosius

Emperor Theodosius was responsible for the deaths of 7000 innocent people. President Biden is promoting abortion and federal funding of abortion that kills at least 1 million pre-born children in the United States every year. He professes to be a “devout Catholic.” However, he continues to receive the Holy Eucharist, despite his actions that are in total contradiction to what the Church teaches about the sanctity of human life, the worthiness of the reception of the Holy Eucharist, and public scandal.

Sacrilege consists in profaning or treating unworthily the sacraments and other liturgical actions, as well as persons, things, or places consecrated to God. Sacrilege is a grave sin especially when committed against the Eucharist, for in this sacrament the true Body of Christ is made substantially present for us. (See Catechism of the Catholic Church 2120).

St. Paul wrote, “Whoever eats the bread or drinks the cup of the Lord unworthily sins against the body and blood of the Lord…. That is why many among you are sick and infirm, and why so many are dying. If we were to examine ourselves, we would not be falling under judgment in this way.” (1 Corinthians 11, 27-31; Catechism of the Catholic Church 1385).

St. John Paul II reaffirmed this teaching in his Apostolic Letter, The Church of the Eucharist 36.

The Code of Canon Law, canon 915, provides that those “obstinately persevering in manifest grave sin are not to be admitted to Holy Communion.”

In July, 2004, then-Cardinal Joseph Ratzinger, Prefect for the Congregation for the Doctrine of the Faith, issued the following instruction that implemented canon 915:

5. Regarding the grave sin of abortion or euthanasia, when a person’s formal cooperation becomes manifest (understood, in the case of a Catholic politician, as his consistently campaigning and voting for permissive abortion and euthanasia laws), his Pastor should meet with him, instructing him about the Church’s teaching, informing him that he is not to present himself for Holy Communion until he brings to an end the objective situation of sin, and warning him that he will otherwise be denied the Eucharist.

6. When “these precautionary measures have not had their effect or in which they were not possible,” and the person in question, with obstinate persistence, still presents himself to receive the Holy Eucharist, “the minister of Holy Communion must refuse to distribute it” (cf. Pontifical Council for Legislative Texts Declaration “Holy Communion and Divorced, Civilly Remarried Catholics” [2002], nos. 3-4). This decision, properly speaking, is not a sanction or a penalty. Nor is the minister of Holy Communion passing judgment on the person’s subjective guilt, but rather is reacting to the person’s public unworthiness to receive Holy Communion due to an objective situation of sin. Source

Therefore, according to that instruction, Cardinal Gregory should meet with President Biden, if possible, instructing him about the Church’s teaching, informing him that he is not to present himself for Holy Communion until he brings to an end the objective situation of sin, and warning him that he will otherwise be denied the Eucharist. If such a meeting is not possible and if President Biden, with obstinate persistence, still presents himself to receive the Holy Eucharist, “the minister of Holy Communion must refuse to distribute it.”

President Biden should not be admitted to Holy Communion because of his obstinate support for the manifest grave sin of legal abortion. Canon 915 is not a “weapon”, but a merciful gift of love from God to bring those who make sacrilegious communions to repentance and conversion.

Cardinal Gregory told a journalist in November 2020 that he would not deny Communion to a politician who supported the codification of legal abortion in federal law and the federal funding of abortion. President Biden supports both policies.

Father Kevin Gillespie, pastor of Holy Trinity Catholic Church in Georgetown, where President Biden sometimes attends Mass, confirmed that he will give Communion to President Biden despite his unrepentant promotion of abortion. When he was asked whether he would give Communion to Mr. Biden should he approach the altar at Holy Trinity, Father Gillespie responded, “Yes.”

“Everyone is welcome,” he continued. “He’s a man of faith, and I would give Communion to him like any other Catholic coming up for the Eucharist.”

Father Gillespie said “The archbishop of a diocese has the authority on issues around politicians and the Eucharist, and [Cardinal Gregory] has made it public that this is where he stands pastorally. He doesn’t agree with everything the president says around abortion, nor do I, but pastorally, this is his approach. The archbishop and I have spoken about that and I’m in full agreement with him.” Source

One of the Prayers of the Faithful at my parish church on July 3 was, “That all bishops, successors of the apostles, will be given all graces necessary to teach and govern according to the doctrines and laws of the Church.”

Cardinal Gregory must apply all of the doctrines, laws, and teachings of the holy Catholic Church regarding non-admission to Holy Communion, especially canon 915, to President Biden and not admit him to Holy Communion because of his obstinate support for the manifest grave sin of legal abortion and the federal funding of it, unless and until he repents and conforms his actions to such laws and teachings.

I call upon the intercession of Saint Michael the Archangel, Protector of the Blessed Sacrament, and pledge as best as I am able to pray and act as follows:

I will pray that Cardinal Wilton Gregory applies all of the doctrines, laws and teachings of the Catholic Church regarding non-admission to Holy Communion, especially Canon 915, to President Biden and not admit him to Holy Communion because of his obstinate support for the manifest grave sin of legal abortion and the federal funding of it, unless and until he repents and conforms his actions to such laws and teachings.

I will offer reparation for sacrilegious communions and receive HOLY Communions.

I will adore, love, thank, praise and worship the Holy Eucharist, the real Body and Blood, Soul and Divinity of Jesus Christ truly present in the Blessed Sacrament.