On his return airplane flight from Mexico, Pope Francis gave his customary in-flight press conference. As usual, the results of the media driven agenda of the press conference overshadowed any news of good words or actions done by the pope before it during his pilgrimage in Mexico. 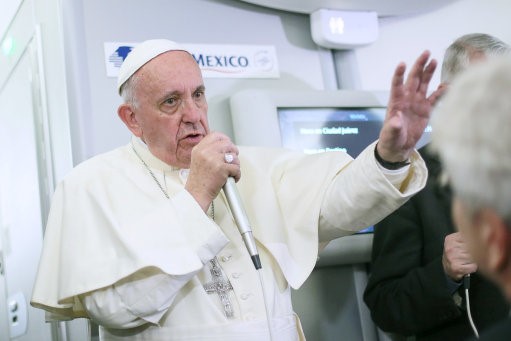 This is one reason why Pope Francis should not give press conferences. It is beneath the dignity of his office. It also creates confusion as to what are the authentic teachings of the Church.

On the flight, a reporter raised the issue of the morality of the use of contraception in the case of the involvement of the Zika virus. Pope Francis said that Pope Paul VI “permitted nuns to use contraceptives in cases of rape.” However, to the contrary, there is absolutely no evidence that Pope Paul VI ever said this.

These and other remarks of Pope Francis and his spokesman have led most people to conclude that he has approved contraceptive acts in cases of sexual intercourse of a husband and wife if the Zika virus is somehow involved. However, we don’t know what kind of supposed involvement of the virus, whether by exposure to the virus or infection of the virus by one and there is a danger of transmission to the other, or whatever else, because nothing has been “clarified” by the Pope’s spokesman.

The Zika virus is transmitted primarily by mosquitoes and can produce mild symptoms such as fever, rash, conjunctivitis and joint pain. The disease is not life-threatening. In fact, it is so mild that researchers estimate that most of those infected with the Zika virus won’t even know they have it and, even if they do feel symptoms, they will only last for up to a week. There are only a few scientifically proven cases of transmission of the virus between husband and wife through sexual intercourse. There is no scientific evidence whatsoever that the virus can cause birth defects. And even if there were such evidence, that would not justify the use of contraceptives as there is no justification for such use for the danger of any other birth defects.

Some other viruses that cause birth defects are chickenpox, Cytomegalovirus, Enteroviruses (Hepatitis A, B, Polio, etc.), Rubella (German measles) and Fifth disease. These viruses have been scientifically proven to cause birth defects. However, there is no justification to use contraceptives to prevent them. Coincidence between Zika virus and a birth defect is not causation and even if it were, permissive use of contraceptives would have been approved for the other viruses that knowingly cause birth defects, but the Church has never done so. The Church has always recognized that children with birth defects are equal in human dignity to perfectly formed children since they are all gifts from our Creator.

Nevertheless, most of the world now believes that it is morally justified for a husband and wife to practice acts of contraception if the Zika virus is somehow involved, although in what way we are not told how. This belief of the world is contrary to the teaching of the Church.

The Church does not teach through papal press conferences and we are not bound to submit our mind and will to what Pope Francis says in them. We are only called to submit our mind and will to the Pope’s authority as follows: “This religious submission of mind and will must be shown in a special way to the authentic magisterium of the Roman Pontiff, even when he is not speaking ex cathedra; that is, it must be shown in such a way that his supreme magisterium is acknowledged with reverence, the judgments made by him are sincerely adhered to, according to his manifest mind and will. His mind and will in the matter may be known either from the character of the documents, from his frequent repetition of the same doctrine, or from his manner of speaking.”  (The Documents of Vatican II, The Dogmatic Constitution on the Church (Lumen Gentium), 25). Pope Francis’ press conferences are not part of his authentic magisterium or teaching authority, especially because answers at press conferences do not constitute “judgments made by him…according to his manifest mind and will.”

Even more so, the Church does not teach through subsequent supposed press conference “clarifications” of his spokesman, Father Lombardi. He has no teaching authority whatsoever. None of his statements are authoritative, they are just confusing and misleading. The extemporaneous remarks of a Pope in an interview, and the commentary of his spokesman do not constitute authentic Church teaching and we have no obligation to make a “religious submission of mind and will” to them.

The truth is that contraceptive acts are intrinsically evil. Also, the proper term is “contraception”, not so-called “birth control” or “artificial contraception”. Contraceptive acts do not “control” birth and they are real and not “artificial”. Pope Paul VI exercised his supreme and authentic magisterium and teaching authority in an encyclical letter. He defined a contraceptive act as “any action which either before, at the moment of, or after sexual intercourse, is specifically intended – whether as an end or as a means – to prevent procreation.” (Encyclical Letter, On Human Life, (Humane Vitae), 14).

Contraceptive acts are intrinsically evil and prohibited in any and all circumstances, regardless of the intention of the actor. The use of contraceptives by homosexuals in sexual acts in an attempt to prevent the transmission of Aids is morally irrelevant since, unlike conjugal marital acts, homosexual sexual acts are intrinsically sterile and cannot be contraceptive. Conception of a human being is impossible through these acts. The underlying homosexual sexual acts are always a grave evil, regardless of whether a condom is used or not.

Some Catholics think that because some popes said nothing about the supposed use of contraceptives by nuns in cases of rape, they can now be used in the case of conjugal acts of a husband and wife with some kind of involvement with the Zika virus. However, there is no evidence whatsoever that any popes ever overtly approved the use of contraceptives by nuns in cases of threatened or actual rape.  Furthermore, popes do not teach by silence and their saying nothing about contraceptive acts in cases of rape cannot be construed as an approval of them. Moreover, some contraceptives also act as abortifacients and kill conceived human beings and those popes probably knew that and would never approve of it.

The first rules of moral theology are that the intention of the actor, the means of the act itself and the end of the act all must be good. The act itself may never be evil and evil means cannot be used for a supposed good end, even if the actor’s intention is good.  The end does not justify the means. The supposedly good end of preventing birth defects, is not justified by the intrinsically evil means of contraception in any case whether the Zika virus is involved or not.

Acts of contraception are intrinsically evil means under any circumstance, before, during or after sexual intercourse, without exceptions. This is the truth. Everything else is interpretation, speculation, opinion or false.