The photo below shows a Peaceful Prayer Presence at the offices of the Diocese of Richmond, Virginia, in which Democratic vice presidential candidate Tim Kaine resides. The faithful prayed for Mr. Kaine’s soul and for the enforcement of section 915 of the Code of Canon Law to him. As a senator, he has received 100% ratings from both Planned Parenthood and the National Abortion Rights League against a zero rating from the National Right to Life Committee. 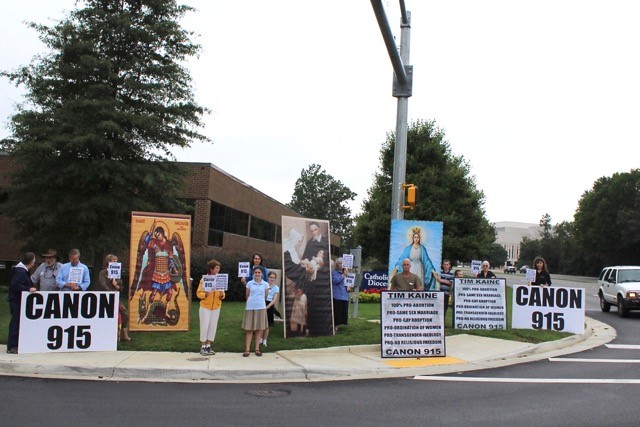 Canon 915 mandates that those “obstinately persevering in manifest grave sin are not to be admitted to Holy Communion.” In his letter to U.S. bishops on the subject, Cardinal Ratzinger, the future Pope Benedict XVI, unambiguously confirmed that Holy Communion should be denied “in the case of a Catholic politician… consistently campaigning and voting for permissive abortion and euthanasia laws.”

It appears that Senator Kaine is “obstinately persevering in manifest grave sin”, within the meaning of Canon 915, and that Holy Communion should be denied him on that ground as well as on the further grounds to prevent Eucharistic sacrilege and to prevent judgment upon himself and scandal to the faithful. As Cardinal Burke wrote concerning situations like this, it is not a punishment to be denied Holy Communion, but it is a discipline “in order to respect the holiness of the Sacrament, to safeguard the salvation of the soul of the party presenting himself to receive Holy Communion, and to avoid scandal.”

However, neither Senator Kaine’s pastor nor his Bishop, Francis DiLorenzo, have stated that he should be refused the distribution of Holy Communion.

Please sign the Petition to Bishop DiLorenzo that under the provisions of Canon 915, and on the grounds to prevent Eucharistic sacrilege, public scandal and judgment upon Senator Tim Kaine, to publicly declare that if Senator Kaine with obstinate persistence, still presents himself to receive the Holy Eucharist, as Cardinal Ratzinger wrote, “the minister of Holy Communion must refuse to distribute it.”

Please sign the Pledge to Offer Reparation for Sacrilegious Communions.