Home » Our Lady of Fatima Crowned Queen of Russia

Our Lady of Fatima Crowned Queen of Russia

I was one of 940 pilgrims with the International Pilgrim Virgin Statue of Our Lady of Fatima, the Missionary Image of Our Lady of Guadalupe and the Visitation Image of Jesus King of All Nations (see the photo below) on the Victorious Queen of the World Peace Flights 101 and 333. We flew on two 747 jumbo jet airplanes charted by Dr. Rosalie Turton, Founder of the 101 Foundation. 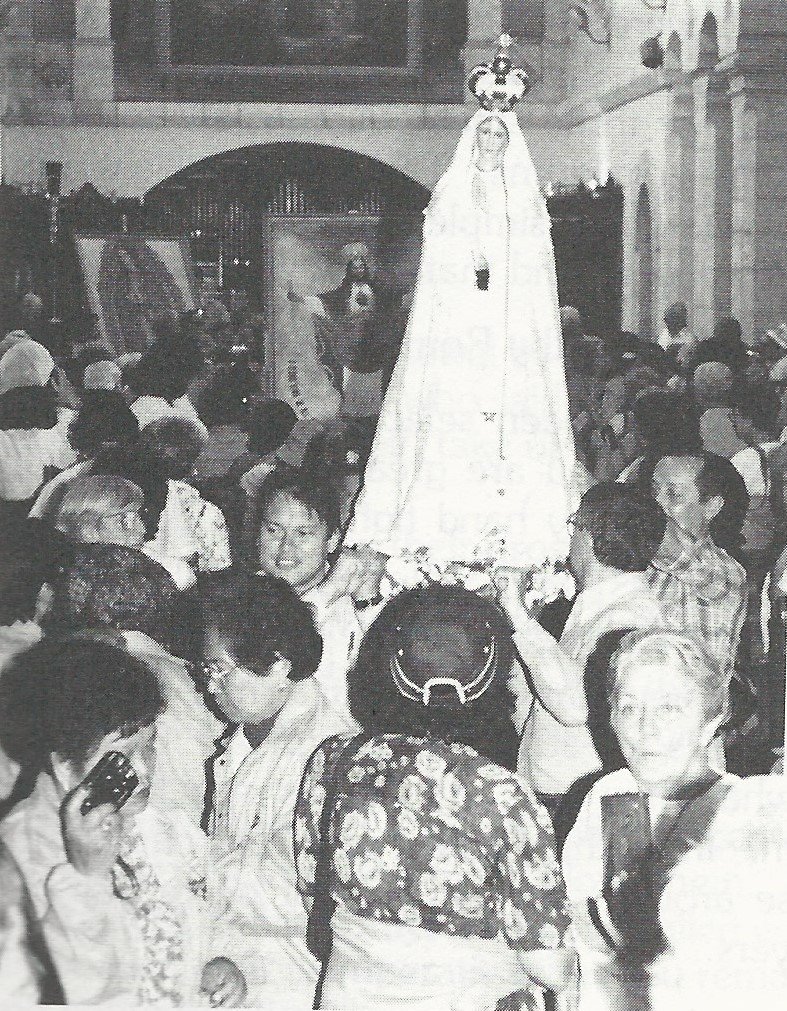 We processed the images and the International Pilgrim Virgin Statue with the original Fatima statue to the middle of the Fatima Shrine Plaza which was filled with over a half million of the faithful.

Our Lady had prophesied through an American visionary, a Filipino visionary and a priest, all of whom were on our pilgrimage, that she would send a dove as a sign for us to have confidence in her intercession for the success of our mission to Russia. To our amazement, after the Mass, a dove came down from the sky and alighted above the right hand of the image of Jesus King of All Nations while the pilgrims recited his devotion’s Chaplet of Unity. It reminded us of what John the Baptist said, “I saw the Spirit descend from the sky like a dove and remain upon him.” (John 1:32). See the dove in the photo below with myself standing in the middle between the images. 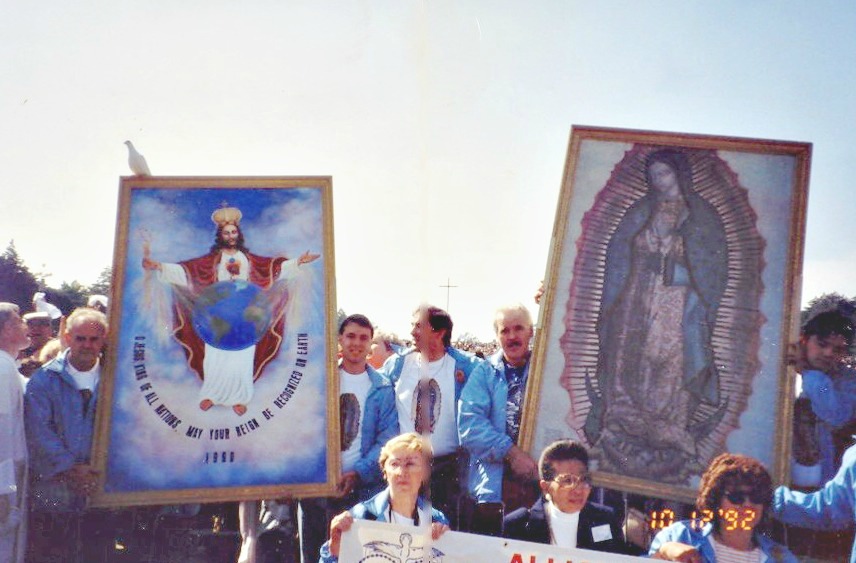 We arrived in Moscow on October 16, the 75th anniversary of the founding of the Knights of the Immaculata by St. Maximilian Kolbe. As we entered Moscow, our tour guide said that she was happy to welcome us to the city and pleased to say that it was now the capital of Russia and no longer of the Soviet Union. She said,

Although we had 73 years of atheism and were brought up as atheists, yet we were born with the love of God in our hearts, and we really are true Christians and we welcome you to pray with us. I welcome you with an open heart and tears in my eyes and we thank you for coming. Like the universe, we are not separated anymore. We are not closed anymore. We are allowed to tell you what we feel and we are happy about this so that when you come here to share with us all of our troubles you can join us in looking to the future with optimism. Because as long as you are with us and we are all together as children of God, it makes us happy.

Our young people have no morals, she continued, because they were brought up through atheistic Communism and there were no models of goodness for them. There were no parents, no teachers, no persons to tell them the difference between right and wrong. There was no one. But now, they must learn that even if there was no one, they are not alone here in that there is always God with them who loves them and who will help them to do good. Thank you for praying for Russia. This is what we need. You have brought love to this country, you have brought us God. Thank you.

We distributed 6 tons of religious goods and thousands of holy cards and rosaries all of which were gratefully received by the Russian people who often broke down in tears. None were thrown to the ground as so often happens elsewhere.

On the night of October 18, around 11:30 PM, many of the pilgrims, including Bishop Paulo Hnilica  and John Haffert, co-founder of the Blue Army, gathered outside Red Square with the International Pilgrim Virgin Statue of Our Lady of Fatima. I entered the Square and scouted out the area and looked for the police. There was only one police car parked near the Square and some soldiers guarding Lenin’s tomb. I decided to lead the pilgrims to Lenin’s tomb in reparation for his bringing of atheistic Communism to Russia and for the millions of innocents who were killed because of it.

I carried a crucifix atop a 6-foot gold pole and led the pilgrims and the International Pilgrim Virgin Statue of Our Lady of Fatima across Red Square in a procession without any permits or permissions. We sang hymns in the pouring rain as we processed to the tomb of Lenin. We stopped about 10 yards in front of the tomb and its soldiers. We began to pray the Rosary and soon the tower clock struck midnight.

Bishop Hnilica, a friend of Pope John Paul II, suggested that we interrupt the Rosary and crown Our Lady as Queen of Russia. A 14-year-old Russian girl, who had just been baptized two weeks before, was chosen to crown her. As she crowned the statue, the soldiers changed their guard (as if symbolizing a change for Russia), a pink dawn appeared in the midnight sky (as if symbolizing a new day for Russia), and the rain miraculously stopped above us, but continued all around us as if we were in the dry eye of a rainstorm! The photo below from the right shows Bishop Hnilica helping the young Russian girl crown the statute with myself to her left with the crucifix. 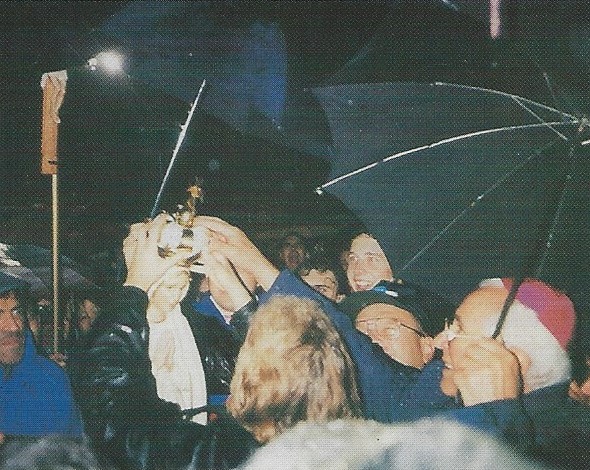 As Our Lady was crowned, Bishop Hnilica related a story. He said, “On March 25, 1984, when the Holy Father asked the bishops to collegially join him in the Consecration of the World to the Immaculate Heart of Mary, I was here in the heart of the Kremlin in the Cathedral of the Annunciation. I clandestinely prayed the consecration prayer and as I left the cathedral, I saw a huge banner hanging over Red Square proclaiming, ‘COMMUNISM HAS TRIUMPHED!’”

“But now, eight years later, that banner is down! The Soviet Union is down! Communism is down! Our Lady has been crowned as Queen of Russia and the Triumph of the Immaculate Heart of Mary has begun!”

The conversion of Russia began through the end of the persecution of the Church in Russia and the enabling of Russians to be free to choose Christ today. May we soon realize the complete Triumph of the Immaculate Heart of Mary!

Jesus King of All Nations prophesied, “My most Holy Mother is preparing the great triumph. The Triumph of Her Immaculate Heart ushers in the reign of my love and mercy.” (Journal 14). May we now recognize His reign in our hearts and on earth.