Home » Our Lady of America, St. Joseph and the Holy Family

Our Lady of America, St. Joseph and the Holy Family

On December 26, we celebrate the Feast of the Holy Family. The Holy Family exemplifies God’s design for marriage and the family. His design for marriage and the family is that a man and a woman, husband and wife, unite forever in a marriage that is open to new life through the procreation and education of their children. This marriage bond is faithful, lifelong, exclusive and unchangeable. God establishes a true marriage bond and so it cannot be dissolved. Untrue marriages may be declared null. 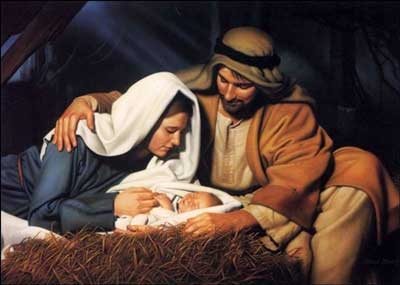 My generation practiced the slogans of, “Don’t listen to anybody over 30” and “If it feels good do it, it’s your choice.” Many people listened to these evil slogans and made evil choices. They allowed lust to rule over chastity and practiced fornication, adultery and contraception, which led to easy no-fault divorce and the abortion and infanticide of innocent children.St. John Paul II called our culture a Culture of Death because it embraced and legalized the death of marriage, the death of innocent pre-born children, and the death of the sick and the dying by suicide and the withdrawal of medical care, food and water.

Children need and deserve a stable and lasting union of their father and mother and the complementary influence of the two different sexes. This is what is natural, self-evident, sensible and best, sociologically and psychologically, for the proper development of children. We should know this from simple human reason and common sense.

Marriage and family are in great crisis due to the willful and sinful habits of the vast majority of adults in our culture regarding sexuality, marriage, and family life. The rebellion of adults against the design of God has caused endless grief and hardship.

Many children are conceived of fornication and adultery. Tragically, most of these children are outright murdered by abortion. 85% of abortions are performed on unmarried women. Abortion rates skyrocketed with the availability of contraception, which opened the doors to lust, promiscuity, fornication, and adultery. 40% of all 2012 births were out-of-wedlock, over 50% of unborn children are aborted and over 50% of marriages end in divorce.

God’s plan is that indissoluble marriage be the foundation of the family, which is the basic unit of society. The family has its origin in that same love with which the Creator embraces the created world. Jesus entered into human history through the family. He fully discloses man to himself beginning with the family in which He chose to be born and to grow up. Jesus appeals to “the beginning,” seeing at the very origins of creation God’s plan, on which the family is based, and, through the family, the entire history of humanity.

St. John Paul II, in a homily given in Australia, said, “As the family goes, so goes the nation, and so goes the whole world in which we live. With regard to the family, society urgently needs to recover an awareness of the primacy of moral values, which are the values of the human person as such thus recapturing the ultimate meaning of life and its fundamental values.”

Our Lady of America and St. Joseph gave the visionary Sister Mildred several messages concerning the family. She said that it was made known to her interiorly that her mission was to converge towards the sanctification of the family. On November 8, 1954, Our Lady spoke to her in these words:

It is the wish of my Son that fathers and mothers strive to imitate me and my chaste spouse in our holy life at Nazareth. We practiced the simple virtues of family life, Jesus our Son being the center of all our love and activity. The Holy Trinity dwelt with us in a manner far surpassing anything that can ever be imagined. For ours was the earthly paradise where once again God walked among men.

As in our little home no sin was to be found, so it is the wish of the Heart of my Son and my Immaculate Heart that sin should, as far as possible, be unheard of in the homes of our children. The Divine Trinity will dwell in your midst only if you are faithful in practicing the virtues of our life at Nazareth. Then, you also, my children, you also will become another paradise. God will then walk among you and you will have peace.

On the eve of his own feast, March 19, 1958, St. Joseph made his own appearance to Sister Mildred and proclaimed the unique privilege that was bestowed on him as the Virgin-Father of Jesus. He said that all fatherhood is blest in his fatherhood. He asked that our family life be modeled on that of the Holy Family, with Jesus at the center of all its activity. He wants us to teach our children well. He said:

Dear child, I was king in the little home of Nazareth, for I sheltered within it the Prince of Peace and the Queen of Heaven. To me they looked for protection and sustenance, and I did not fail them. I received from them the deepest love and reverence, for in me they saw Him whose place I took over them. So the head of the family must be loved, obeyed, and respected, and in return be a true father and protector to those under his care. In honoring in a special way my fatherhood, you also honor Jesus and Mary. The Divine Trinity has placed into our keeping the peace of the world.

The imitation of the Holy Family, my child, of the virtues we practiced in our little home at Nazareth is the way for all souls to that peace which comes from God alone and which none other can give.

On March 30, St. Joseph again appeared and declared himself the protector of the Church and the home. He stated that Jesus and Mary desired that his pure heart, so long hidden and unknown, be now honored in a special way. He asked that we honor him on the First Wednesday of every month and pray the Joyful mysteries of the Rosary in memory of his life with Jesus and Mary. St. Joseph confirmed his enormous role in God’s plan of salvation, shared with his holy Spouse, the Mother of Jesus. (Diary 26-31).

One way of honoring St. Joseph’s request to model our family life on that of the Holy Family is to pray as a family. Our Lady told Sister Mildred that “making the Rosary a family prayer is very pleasing to me. I ask that all families strive to do so.” (Diary 21). She also promised her protection to the family that honors her. Sister said that “. . . Our Lady also requested a picture or statue of herself as she appeared [as Our Lady of America] . . . to be honored and venerated in every Christian home.” (Diary 26).