Home » Our Lady of America Is Approved as a Private Devotion

Our Lady of America Is Approved as a Private Devotion

Our Lady of America Is Approved as a Private Devotion
Dan Lynch
May 8, 2020


On May 7, six bishops, led by Most Reverend Kevin C. Rhoades, Bishop of Fort Wayne-South Bend, approved the Our Lady of America Devotion as a private devotion. These were the bishops of the dioceses where the alleged visions, locutions and private revelations to Sister Mildred Neuzil (1916-2000) were said to have occurred in relation to the Our Lady of America Devotion.

In their Statement the bishops stated, “Given this history of prayers and religious articles being given approval by competent ecclesiastical authority, the use of such prayers [and] religious articles may continue as a matter of private devotion, but not as a public devotion of the Church. Indeed, such private devotion would be consistent with the history of the United States of America being dedicated to Our Lady.” 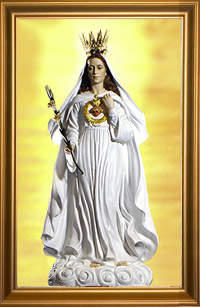 Although the bishops did not approve the Devotion “as a public devotion of the Church”,
they did not condemn or prohibit anything in the Devotion, especially the prayers, The Diary [of Sister Mildred] or the medal of Our Lady of America.

The grants on January 25, 1963, by Archbishop Paul Leibold, Sister Mildred’s spiritual director, and Father Daniel Pilarczyk, of the Imprimatur and Nihil Obstat to The Diary that contained prayers and descriptions of the image and the medal of Our Lady of America, and that declared them to contain nothing contrary to faith and morals, are still valid.

In a letter to the United States Bishops dated May 31, 2007, Cardinal Raymond L. Burke, D.D., J.C.D., while Archbishop of the Archdiocese of St. Louis, reviewed the prior history and the state of the Devotion, as well as the earlier actions of Archbishop Leibold approving the devotion. Archbishop Burke wrote, “What can be concluded canonically is that the devotion was both approved by Archbishop Leibold and, what is more, was actively promoted by him.”

The Devotion, as it has been practiced for approximately the last 60 years, may still be practiced privately.

Bishop Rhoads’ Commission stated, “Looking at the nature and quality of the experiences themselves, [of Sister Mildred] we find that they are more to be described as subjective inner religious experiences rather than objective external visions and revelations.” The Commission also stated, “It seems that these were authentically graced moments, even perhaps of a spiritual quality beyond what most people experience, but subjective ones in which her own imagination and intellect were constitutively engaged, putting form to inner spiritual movements.”

Based on these findings, Bishop Rhoades came to the conclusion that “the visions and revelations themselves cannot be said to be of supernatural origin in the sense of objective occurrences (non constat de supernaturalitate); thus further, I cannot approve or support public devotion or cult.” The bishops of the other five dioceses accepted these findings and conclusions. Therefore, the Devotion may not be practiced “as a public devotion of the Church.”


Dan Lynch Apostolates will continue to promote and teach the practice of the Our Lady of America Devotion as a private devotion and to distribute religious goods and articles for the purpose of private devotion.
{module_contentholder,47600}