On today’s Feast of the Holy Innocents, we remember the first martyrs for Jesus Christ. They were the babies under two years of age in Bethlehem whom were killed by the raging hatred of King Herod who wanted to prevent a prophesied Bethlehem baby from becoming a rival King.

We also remember the unborn victims of abortion and the many manifestations from the Missionary Image of Our Lady of Guadalupe of heartbeats and kickings of an unborn child. Some of these heartbeats have been confirmed by medical personnel listening with stethoscopes.

In their reverential devotion, many of the faithful touch and kiss the Missionary Image. In doing so, many have felt warmth, an electric-like current, and Our Lady’s heartbeat. They’ve also felt a womb of flesh, beneath which they have felt the heartbeats, movements and kickings of an unborn child.

God gives these signs at his pleasure to increase our faith, hope and love of him. The heartbeats are also a sign that life begins at conception and is not a “choice” for the mother because God, the Author of Life, has already chosen the child for life.

Below are some testimonies from witnesses of heartbeats and kickings from the Missionary Image at Johnette Benckovic’s Women of Grace Retreat at Malvern, Pennsylvania last summer.

On Saturday night at Malvern, I was alone with the Missionary Image of Our Lady of Guadalupe image and I used the stethoscope provided to try to hear Jesus’ heartbeat. I did not hear anything for the first couple of seconds, but then the sound of a baby’s rapid heartbeat! Then, I was quite literally kicked by Him in the womb. I was being very delicate with the stethoscope, and He kicked the hand holding it.

I thought I might be imagining what I had been praying for. I had been asking the Lord to reveal Himself to me in a unique way and I believe He did.

I repeated the above process, and the same thing happened. I knew then that I had received a great grace and miracle. I told Johnette on Sunday, but I have only shared this with my husband, daughter and one friend who needed encouragement.

Thank you for the opportunity to share this with you. 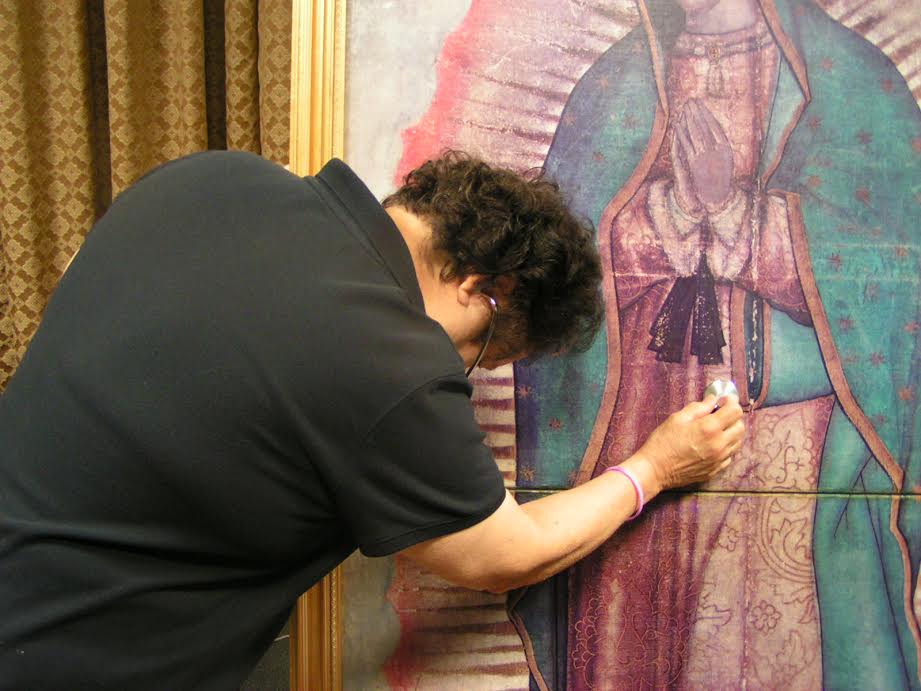 I had been thinking about how the Protestants I know would mock us for venerating the Missionary Image of Our Lady of Guadalupe, but my son’s Confirmation saint is St. Juan Diego, the one to whom Our Lady of Guadalupe appeared on December 12, 1531. So, I thought that I should go up to venerate the image. The second, the very second that I stepped foot on the stage, I began trembling to my core. (I know this sounds trite, but there is just no other way to describe it).

Others were praying over the image and had their hand on it, so I tried waiting…but I hadn’t noticed before how round and full Mary’s belly was. I told myself that was silly and that I had seen so many photos and pictures of the image, but then again, how could I have missed how obviously and truly pregnant Mary was. And then, I did what most people do when face to face with a pregnant woman-my hand shot out. And as my hand made contact just under the black belt- boom boom! I drew my hand away and my trembling grew worse.

A second time I reached out and was kicked! No one said anything about the baby Jesus kicking! Just that if one used a stethoscope, one might hear a heartbeat, but this sweet baby couldn’t wait for us to get one I guess. A third time I reached out, only to be greeted by the energetic kick again. I did not need to wait, but hurried back to my seat (I’m not sure how since my legs were trembling so hard) only to find a dear sacred sister was sitting next to my bag. I was so grateful and my heart swelled as we began singing and then reciting the Rosary together before hours of adoration and contemplation.

For years, I have loved talking to teens of the sweet baby Jesus and while worshipping this past year at the Shrine of Saint Anthony, I have prayed that my heart, too, might so resemble Mary’s that the infant Jesus would come to me.  If only I could have imagined that He would choose this Missionary Image of Our Lady of Guadalupe, so dear to my own son.
-Deanna

I was profoundly moved by the Missionary Image of Our Lady of Guadalupe when I first saw her on Friday, even before I knew that this was a digital image taken from the original. One of the women told me about it and then I read the description on the image that explained it. I was moved by how reverent the women were as they patiently waited their turn to pray before the image.

Two nurses brought a stethoscope on Saturday and we listened for heartbeats. I heard a strong heartbeat from Our Lady and a softer one from Baby Jesus. I also heard a swishing noise that a woman told me was the amniotic fluid.

I made another visit on Saturday and again heard the heartbeats.  I felt as if it was a special blessing. It helped me to feel closer to the humanity of Our Lady and Jesus. I am very grateful.

I didn’t hear anything on Sunday but during the Consecration and Holy Communion I experienced a deep healing. I was drawn after Mass to kneel beside the Blessed Mother and thank her. it was hard each time to pull myself away from her. I could have stayed there for hours.

Concluding Prayer for Today’s Feast of the Holy Innocents

O God,
whom the Holy Innocents confessed
and proclaimed on this day,
not by speaking but by dying,
grant, we pray,
that the faith in you which we confess
with our lips may also speak through our manner of life.
Through our Lord Jesus Christ, your Son,
who lives and reigns with you in the unity of the Holy Spirit,
one God, for ever and ever.
— Amen.