Mary’s House and the Miracle Hunter

On August 15, I attended a conference in Jamaica, Vermont, on a site that includes a replica of the last home of the Blessed Virgin Mary that is located in Ephesus, Turkey. St. John the Evangelist built the original home, now called Mary’s House, and cared for Mary until her death and Assumption into heaven from there. In 1891, the remains of Mary’s House in Ephesus were discovered through the efforts of Servant of God Sister Marie de Mandat-Grancey.

In 1959, an American woman pilgrim at Mary’s House had a vision of Our Lady of Ephesus and received from her an inspiring message of hope for those who suffer. She also said that Our Lady of Ephesus looked most like Our Lady of Guadalupe. On April 4, 2003, precisely 44 years after her vision, a mosaic image of it was solemnly blessed and installed in an oratory in the Basilica of the National Shrine of the Immaculate Conception in Washington DC.

I wrote a book, The Gospel Love, that took me 18 years to complete! It’s a fictional autobiography of the life of St. John that also tells the stories of the discovery of Mary’s House and the pilgrim’s vision. The book is dedicated to Sister Marie.

The photo below shows me in the front of the replica of Mary’s House presenting my book to Erin on my left and to Mary Taranelli, the daughter of the American pilgrim visionary, on my right. 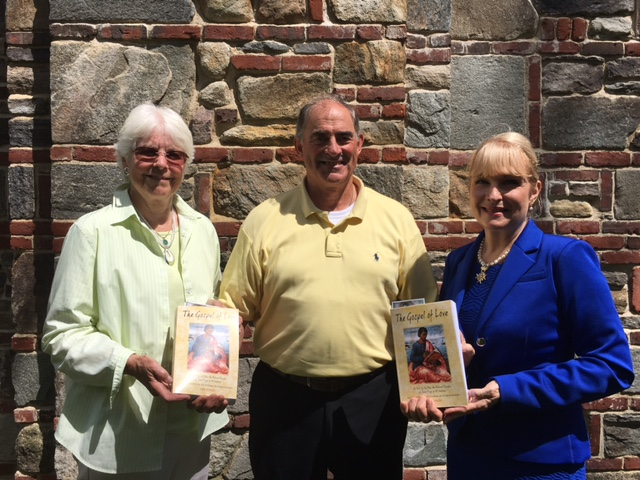 Erin wrote in the Foreword to my book:

The Gospel of Love is unlike any other book about St. John the Evangelist. It’s an accurate, historical fictional autobiography written from John’s own point of view. While reading your way through it, you will feel like you are right there with John in 1st century Israel and Ephesus.

This is a fabulous book! I really hope that it inspires many people who will share it with their friends and relatives.

You can learn the whole story in my book here.

You can also view the movie on the life of Sister Marie that was filmed on the site of the replica show on house. It’s called THE JOURNEY OF SISTER MARIE DE MANDAT-GRANCEY. It  was produced by Michael O’Neill, The Miracle Hunter, and can be seen on EWTN television on April 27, at 6.30 pm EDT.

Here is a link for the trailer: https://youtu.be/G4dxLYUIsng

So pull up a chair and watch the show, record it for future viewing and order my book for the whole story.