Home » Justice Scalia, the Seton Miracles and the Jesus King of All Nations Devotion

Justice Scalia, the Seton Miracles and the Jesus King of All Nations Devotion

The recent death of United States Supreme Court Justice Antonin Scalia reminded me of the so-called “Seton Miracles”, his belief in them and their relation to the Jesus King of All Nations Devotion.

The Seton Miracles included a priest’s wounds of the stigmata and incidents surrounding him such as weeping statues of the Blessed Virgin Mary, changing-color rosaries, miracle colors and lights in the sky, and miraculous healings from 1991 to 1993 at St. Elizabeth Ann Seton Church in Woodbridge, Virginia.

The priest’s name was Father James Bruse. He was the spiritual director of the mystic who received the revelations of the Jesus King of All Nations Devotion. He was also our apostolate’s first spiritual director.

I personally witnessed Father Bruse’s stigmata wounds and the weeping of a statue of the Blessed Virgin Mary that he held in my presence. He reported many conversions and healings through his prayers. He told me that some of the phenomena that he experienced were connected to the Jesus King of All Nations Devotion. In His image, Jesus King of All Nations reveals His stigmata wounds.

On October 21, 2010, Justice Scalia gave an address in which he talked about the Seton Miracles, which he believed. He asked, “Why wasn’t that church absolutely packed with nonbelievers seeking to determine if there might be something to this?”

The answer was obvious, he said with disdain, “The wise do not investigate such silliness.”

“Father Bruse came to the ultimate cynic,” Father Hamilton said. “I don`t believe in these kinds of things. I told him it must be the result of atmospheric conditions.” The two priests then exchanged statues.

“When he gave me the statue, I noticed these marks on his wrists,” Father Hamilton said. “I said to him, ‘Stigmata.’ But, he didn’t know what I was talking about or what those marks meant. “So, I said, “Didn`t they teach you anything in the seminary?”

“Later, I went to Father Bruse`s room at the rectory. I looked at his statue of St. Elizabeth Ann Seton and the statue was crying blood. I backed out of his room.”

“When I returned to my own room, the statue of Mary that Father Bruse had given me was crying.”

Father Hamilton said, “Of course I doubted it in the beginning. And then I saw some of this stuff he’d been talking about. It’s true. That’s all I can tell you. It’s true. It’s true.” 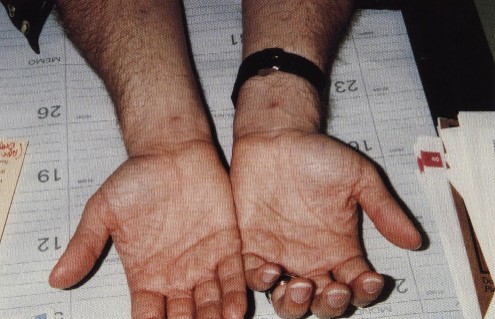 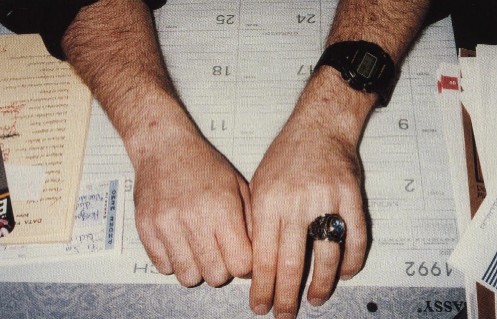 Father Bruse’s pastor, Father Daniel Hamilton, saw the stigmata wounds on Father Bruse’s wrists, a statue in Father Bruse’s room producing blood, and other crying and bleeding statues. He said, “Of course I doubted it in the beginning. And then I saw some of this stuff he’d been talking about. It’s true. That’s all I can tell you. It’s true. It’s true.”

Author James L Carney wrote in his book, The Seton Miracles, “In the entire history of the Catholic Church, there may be no greater occurrence of weeping statues and other physical signs of God’s presence through the Blessed Virgin Mary than what took place on the outskirts of our Nation’s Capitol in 1991 – 1993.”

Father Bruse believed in and practiced the Jesus King of All Nations Devotion. He wrote to me, “Through the practice of the Jesus King of All Nations Devotion we will grow spiritually and experience the reality of His kingship. He is the Son of the living God and this Devotion is a gift of His love and mercy for us to prepare us and challenge us to the extreme to reject Satan and the ways of the world and to choose Christ and to love His teachings because His reign is coming through the triumph of the Immaculate Heart of Mary!”

After the 9/11 Attack on America, Fr. Bruse said, “I see that as something getting ready to happen. I think it’s a major wake-up call that’s going on, and I think that all that I see — the weird temperature, the polar caps, the earthquakes — there’s a lot going on and I think we should all be prepared. I really do. I’ve had a lot more come back to Church and Confession. I think it’s all different than a few years back. I think we’re in a different era now. Christ is preparing us for the Kingdom of God, saying ‘Be prepared,’ but shouting it out now. It’s as if Christ is saying ‘Wake up! Let’s get moving on our spirituality.’ I believe it’s building up to something big.”

We are called to have hope in the promise of Jesus King of All Nations for a great renewal of the Church, of mankind and of all creation. He said:

Therefore let it also be known that a great renewal of My Holy Church, of mankind and indeed of all creation will follow the cleansing action of My Justice. How greatly I Love My people! It is for your good O mankind that I allow My Justice to be poured out in order to awaken your conscience and correct your sinful behavior. Yet you see how dearly I Love you in that I continually warn you and even seek to comfort you in the pain of the cleansing which is almost upon you.

Return to Me My people. I Love you Infinitely and Eternally for such is My very Nature as God; the One-True God, the Sovereign King of all that is.

Pray and trust in Me My Faithful ones. I will not abandon you in the dark and cloudy day which rapidly approaches. Stay close to My Immaculate Mother; cling to her Holy Rosary, invoke her Immaculate Heart.

Take up My devotion of Jesus, King of All Nations for in its practice you shall find for yourselves a haven of Grace, Mercy and Protection. Enthrone this My image everywhere for I shall be powerfully present there and the Power of My Sovereign Kingship shall surely shield you from My Just Judgement.

You may learn how to practice this Devotion recommended by Father Bruse and heed his exhortation to “Be prepared” by reading my book, The Coming Great Chastisement and the Great Renewal. Please click here to order your copy today! 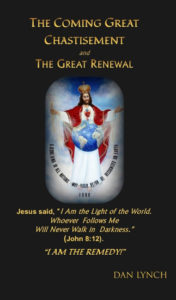