Home » Is the Caritas Round a Sacrilege of the Miraculous Medal?

Is the Caritas Round a Sacrilege of the Miraculous Medal?

A friend of mine sent me a book published by Caritas of Birmingham. He
asked for my opinion about it. This is what I wrote to him:

I read the book that you sent me published by Caritas of Birmingham, It Ain’t Gonna Happen! You asked for my opinion.

The author calls himself “A Friend of Medjugorje.”
However, according to the authorities that I know at Medjugorje,
Caritas is not a “friend of Medjugorje”. It does not obey their
regulations or requests. Here is what the world-renowned priest Fr. Svet
of Medjugorje has to say about Caritas:

Here
in Medjugorje, in the name of the priests who are working in the parish
with pilgrims who are coming from all over the world, I express my deep
concern for the organization called CARITAS from Birmingham, Alabama.

It
appears that the organization does not follow good practice of Church
discipline as well as the discipline of its members in regard to their
ways in which they are organized within. We are afraid that there might
be elements of a lack of respect for family relationships, mutual
respect, respect for the Church authority, respect for the families
where the members come from, respect for property of family members who
are there now and those who were there and left the community.

The author of It Ain’t Gonna Happen! wrote
in the book that Our Lady of Medjugorje asked on November 27, 1989 “to
spread the devotion and the carrying of this medal [the Miraculous
Medal].” This is a good thing to do.

In 1830, Our Lady of the
Miraculous Medal showed the visionary, St. Catherine Laboure, the design
of the medal in an apparition. The Church approved this apparition and
design.

He
then goes on to state that our money will become worthless and “you can
have the Miraculous Medal Medjugorje Round [his new name for his
humanly invented medal] in your possession for your own physical
welfare.” The silver Round contains the words, “one troy ounce .999 pure
silver.” It also contains the words of the national motto for the
United States, “In God We Trust”, which is minted on its money. In my
opinion, all of this is a blatant sacrilege. 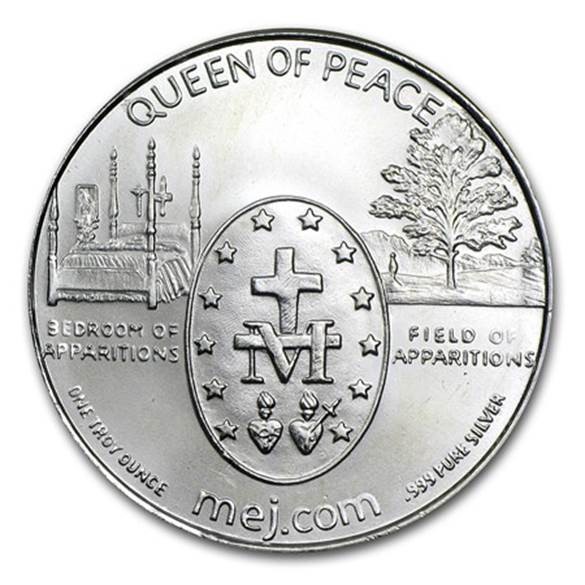 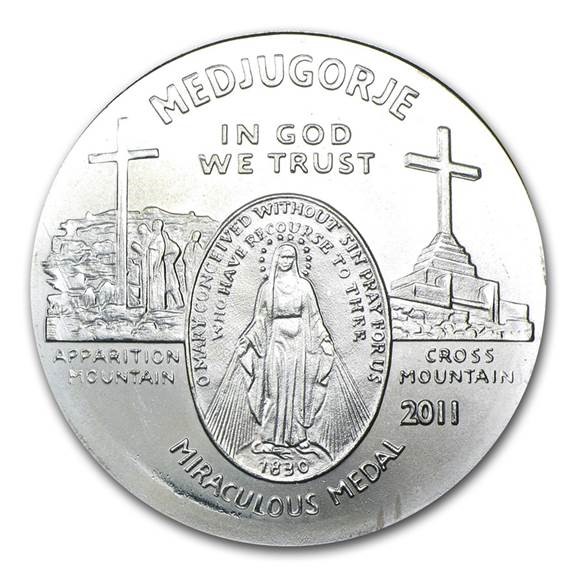 The word “sacrilege” derives from a Latin word meaning, “the stealing of sacred things.” This is what somebody did.
Someone took the design of the Miraculous Medal, an approved sacred
medal, revealed by the Queen of Heaven, and had the presumption to
redesign it as a human being (not from heaven) in a sacrilegious manner
(not sacred, as is the Miraculous Medal). Someone has tied unapproved
words, images and apparitions to an approved apparition on this
so-called Round, advertised a website on it, and urges people to invest
in it as a replacement for money and for their physical welfare.

It is a sacrilege to redesign the Miraculous Medal,
which is a sacramental and a holy thing revealed from heaven and it is a
sacrilege to use it for worldly and unholy purposes, such as an
investment or as a substitute for money.

The Catechism of the Catholic Church teaches
that sacrilege is a violation of the first commandment. “Sacrilege
consists in profaning or treating unworthily… things…, consecrated to
God. Sacrilege is a grave sin. (CCC 2120).

In
my opinion, not only is the designer of this sacrilegious Round
violating the first commandment, but also any of those who obtain it or
use it. My advice to everyone is not to obtain these Rounds and, for
anyone who has obtained them, to get rid of them as soon as possible as
they may attract demonic spirits, as do occult crystals and other
superstitious objects.

Joe, I’m sorry to be so brutally honest
about this, but I think that this is a very serious matter about which
you should examine your conscience and speak to a holy priest.

Please click here to learn the full truth about Our Lady of Medjugorje’s requests and how to respond to them.