Home » Is Mary a Co-Redemptrix?

Is Mary a Co-Redemptrix?

On March 24, 2021, at a General Audience, Pope Francis referred to the Blessed Virgin Mary as a Mother, “to whom Jesus entrusted us, all of us; but as a Mother, not as a goddess, not as co-redeemer: as Mother.”

The remark of Pope Francis that Mary is not a “co-redeemer” is not an authoritative  magisterial teaching of the Church. The Pope said that Jesus entrusted us to the Mother of God ”as a Mother, not as a goddess, not as co-redeemer.” There are no magisterial statements that Mary was “a goddess”, which would be blasphemous, and  none of the faithful and no theologian has ever claimed that.

On the other hand, there are many magisterial statements and many of the faithful and many theologians believe that Mary is a co-redeemer. In fact, her task as a Mother is to help us to attain salvation by cooperating in a very special way in the Redemption accomplished by her Son. 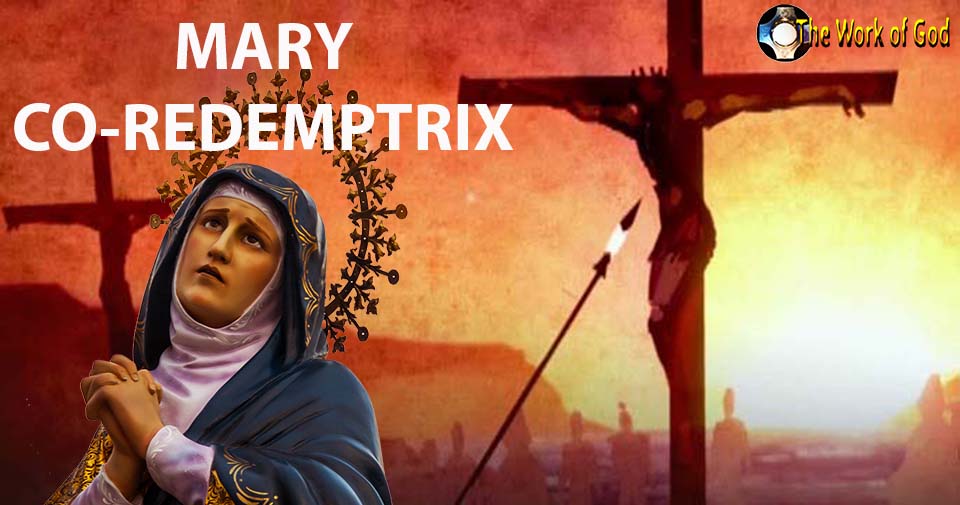 Our Redemption was merited solely by the passion and death of our Lord and Savior, Jesus Christ. (Cf.Hebrews 9:15; I Timothy 2:5). By His Redemption, Jesus paid the full price to satisfy God’s justice and to buy us back from the consequences of sin, death and the loss of heaven caused by the Original Sin of Adam and Eve. By His redemption, He merited for all humanity the supernatural life of grace and our salvation and the glory of heaven. This is the objective Redemption.

However, these graces must be applied to us through our following in Christ’s footsteps on our earthly pilgrimage. Jesus said that “if a man wishes to come after me, he must deny his very self, take up his cross, and begin to follow in my footsteps.” (Matthew 16:24). As the Cyrenean helped Jesus to carry His cross, so we must join our efforts to His and participate in His redemptive work.

This is the subjective redemption by which, according to Christ’s will, all of the members of the Church, His mystical body, follow His footsteps in cooperation with His redemptive work so that the graces merited by Him may be applied to His greater glory. This is what St. Paul meant when he said that “in my own flesh I fill up what is lacking in the sufferings of Christ for the sake of His body, the Church.” (Colossians 1:24).

Jesus is the only Redeemer because He alone is the mediator between God and man. However, He has willed to take into partnership in His redemptive work all of those whom He redeemed in order that the merciful work of His love may shine forth through us. Mary followed in her Son’ s footsteps and cooperated in the objective redemption and still cooperates in the subjective redemption.

Theologian Mark Miravalle wrote, “The doctrine of Marian co-redemption, which refers to Mary’s subordinate role though unique human role with Jesus in the historic work of Redemption, is deeply rooted in Scripture, the Fathers, the Liturgy, and Church doctors, and explicitly and consistently taught by the papal Magisterium for the last two centuries; and the Co-redemptrix title, which in a single term denotes Mary’s unique human role in the Redemption, has enjoyed an unbroken presence within the Church’s devotional and mystical Tradition since the 14th century.

“Mary’s free and active consent at the Annunciation brought Jesus, the divine Redeemer into the world, to whom she gave His body, the instrument of Redemption (cf. Luke 1:38, Luke 2:1-20, Hebrews 10:10). Simeon prophesies Mary’s co-suffering with Jesus at Calvary (cf. Luke 2:35). At Calvary, Mary shares in the suffering of her Redeemer Son, and consents to the offering of Him as the victim-ransom of Redemption (cf. John 19:26-27).”

Co-redemptrix does not mean that Mary shared equally with Jesus in the Redemption of humanity. It simply means that she accompanied Him and helped Him and cooperated with Him in the work of Redemption. Similarly, the co-pilot of an airplane does not share equally with the pilot in the operation of an airplane. However, the co-pilot accompanies and helps the pilot in a subordinate and auxiliary role. Mary’s co-redemptive role is absolutely subordinate and auxiliary to the central role of Christ.

Moreover, all Christians are universally called to be co-redeemers, to cooperate in the work of Redemption and to follow St. Paul’s example to “make up what is lacking in the sufferings of Christ, for the sake of His body, which is the Church.” (Colossians 1:24). By leading our Christian lives in faith and action we cooperate with Jesus in the redemption of others and the release of the graces of His Redemption. St. Paul also calls us to be “co-workers with God.” (1 Corinthians 3:9). St. John Paul II called us to be “co-redeemers in Christ.” (John Paul II, Discourse to the Personnel of the Fatebenefratelli Hospital, L’Osservatore Romano, April 5, 1981).

Jesus King of All Nations referred to His daily intentions for the praying of His Chaplet of Unity and said, “Offer My Chaplet of Unity on Saturdays for the proclamation of the dogma of Mary, Mediatrix of All Graces and Co-redemptrix. My Holy Mother will receive this honor from my Church. It is my Will. So it shall be. ‘these things are recorded in the chronicle of his pontificate.’ (1 Maccabees 16:24). This dogma is to be a great light for the nations and usher in the Era of Peace. The enemy is furious at the prospect of this dogma and is ferociously fighting to prevent it. Legions of demons have been assigned the task of destroying this work, so much do they fear Mary, the Woman of Revelation. The gates of hell shall not prevail against My Holy Will. Amen, amen so I say, so it shall be. For I AM, the Eternal One, the Only One, the Lord of all.” ‘They will fight with the Lamb, but the Lamb will conquer them, for he is Lord of lords and King of kings, and those with him are called, chosen, and faithful.’ (Revelation 17:14.) My blessing to you.”

Jesus King of All Nations also said, “In these times, only one thing will be given as a remedy. I myself AM that remedy!” (Journal 159). “I have told you of the remedy, that of the public practice of my Devotion and veneration of my Image.” (Journal 671). So, let us learn how to practice His Devotion HERE and how to enthrone His Image HERE! 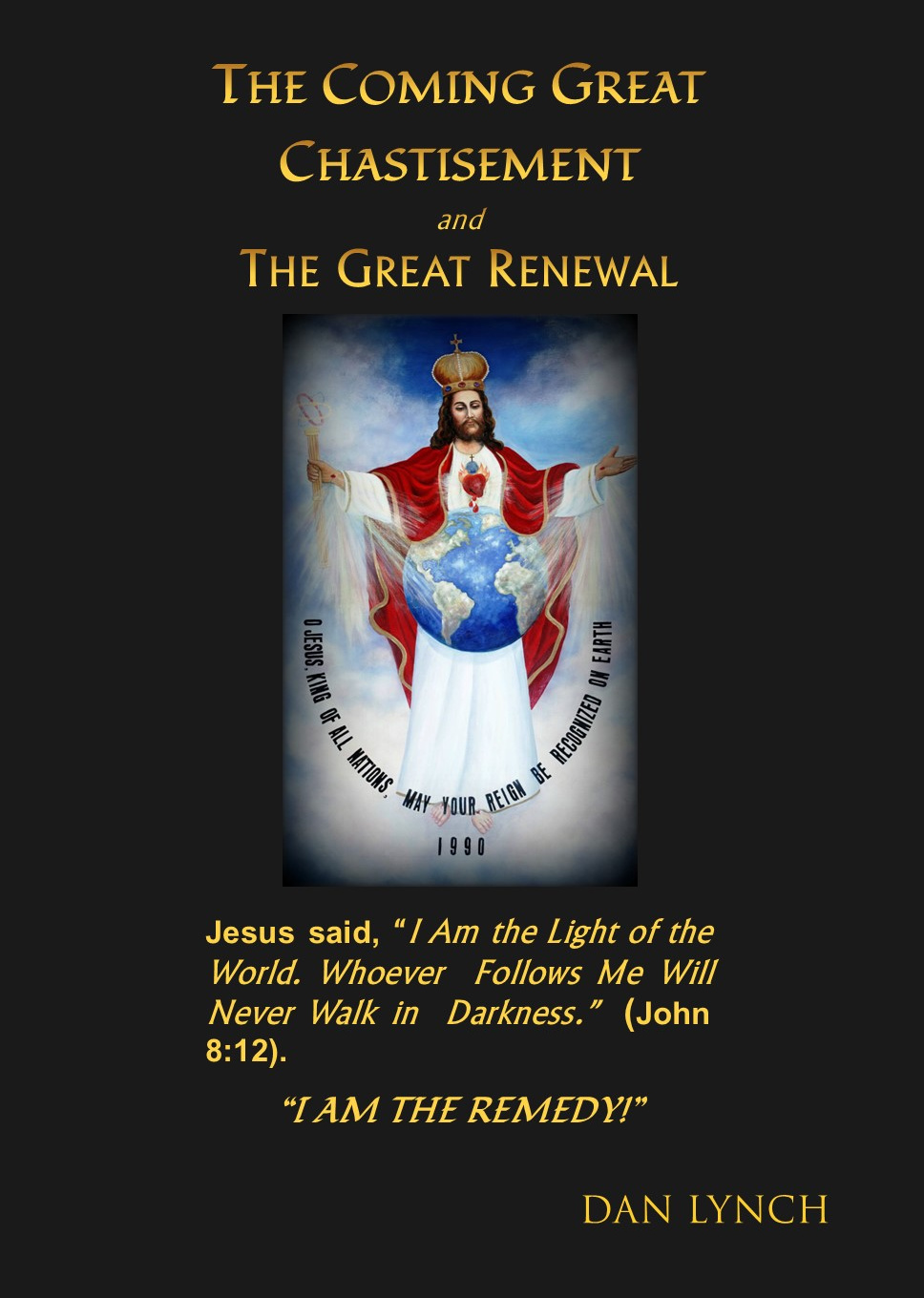