Home » Is It The Time of the Ten Secrets?

Is It The Time of the Ten Secrets?

On September 2, 2019, Our Lady appeared to Medjugorje visionary Mirjana Soldo and said, “I am telling you that it is high time for you to kneel before my Son to acknowledge Him as your God, the center of your life.”

According to the Mystic Post website, Father Livio Fanzaga, Director of Radio Maria in Medjugorje, translated the original message in Croatian to mean “no time” rather than “high time.” He said, “I believe that the time of secrets coincides with the 40th year of appearances.” Less than two years are left before that anniversary.

We should also be mindful that in her July 25th  message Our Lady told visionary Marija, “Little children, trials will come and you will not be strong, and sin will reign but, if you are mine, you will win, because your refuge will be the Heart of my Son Jesus.

Therefore, little children, return to prayer until prayer becomes life for you in the day and the night. Thank you for having responded to my call.”

Will you be ready when the trials come? Could these “trials” refer to the ten secrets? Will the secrets soon be revealed?

Father Petar Ljubicic (designated recipient of Mirjana’s secrets) said, “Everything is closer and closer…God has to do something very quickly.” Are you ready?

I had a personal interview with visionary Mirjana regarding the ten secrets. It is contained in my book, The Ten Secrets of the Blessed Virgin Mary, How to Prepare for Their Warnings. You may obtain it here. 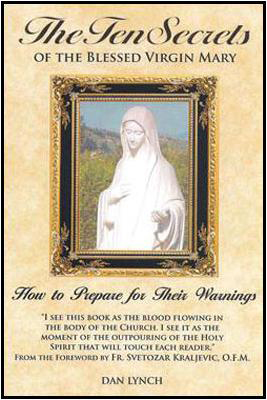