Hundreds In Eucharistic Procession with Missionary Image to Abortion Center

On October 2, over 400 Catholics in Denver joined a pro-life Eucharistic procession with the Missionary Image of Our Lady of Guadalupe around the Planned Parenthood abortion center, the largest in the state and one of the largest in the country.

Maria Elisa Olivas, community coordinator for the Archdiocese’s Respect Life Office said, “The testimony I picked up from Hispanic participants was how peaceful and loving is the strength that Jesus brings to us when we process in a place of death.”

Catholics from parishes all around the Archdiocese participated in the event, as did seminarians from St. John Vianney Theological Seminary, priests, and the Sisters of Life.

Another participant said, “I was able to experience a gentle peace as we processed in shared prayer and adoration. It was so nice to be surrounded by all ages — from newborn babies, pregnant mothers, elderly, and all ages in between — as we gathered in prayer, lifting our voices for the voiceless.” 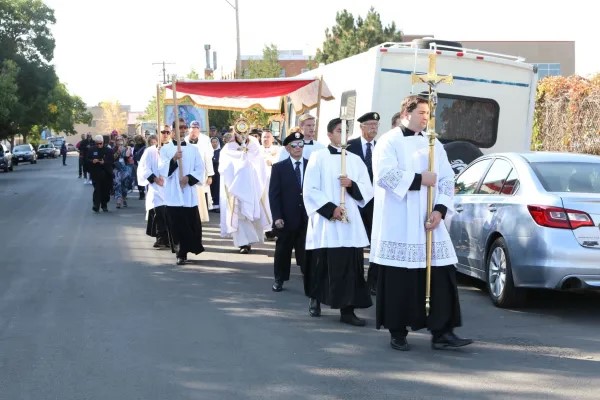 The procession began in the garden of a nearby pro-life clinic and circled the abortion center three times before Benediction was offered back in the garden.

Gianna Smith, a sophomore in high school, said that “it is important for young people to pray at Planned Parenthood. Saturday was amazing because there were so many people, so you have the power of group prayer, and on top of that, the Eucharist circling the building.”

“My mom taught me at a very young age how terrible abortion is, so I want to be a part of the movement of it being illegal and unthinkable,” Gianna explained. “I know God especially listens to young people praying, and with such an important issue as abortion is, I don’t even mind giving up a Saturday.”