“Through her [Our Lady of Guadalupe’s] powerful intercession, the Gospel will penetrate the hearts of the men and women of America and permeate their cultures, transforming them from within.” (Pope John Paul II, The Church in America, No. 70 ).

The Spanish Conquistadors led by Hernan Cortes installed statues of the Blessed Virgin Mary on the altars of human sacrifice in Mexico as they marched towards the Aztecs in Tenochtitlan, present-day Mexico City.

There they saw the great temple of human sacrifice to Huitzilopochtli, the Aztec’s false war god, whom they called the “Lover of Hearts and Drinker of Blood.” They had dedicated this temple in 1487 over a period of four days when they sacrificed more than 80,000 people to their false god.

In 1521, Cortes demanded that the Aztecs stop their practice of human sacrifice, but they responded that they would not, but would make war upon the Spaniards. The Spaniards destroyed the temple and conquered the city in a 93-day siege. This was the beginning of the end of human sacrifice in Mexico that was fully realized with the apparitions of Our Lady of Guadalupe to Saint Juan Diego 10 years later in 1531.

As a result of her apparitions and her miraculous image that she left on Saint Juan Diego’s cloak, nine million Indians were converted to Catholicism over the next nine years in the greatest mass evangelization in the history of the world, human sacrifice ended forever in Mexico and the conquered Aztecs intermarried with the Spanish forming the mestiza Mexican race.

Let us pray that she will repeat her historic role in our American Culture of Death as the Star of the New Evangelization by melting hearts, bringing millions of conversions and ending the human sacrifice of abortion through inculturation.

Pope John Paul II wrote that Our Lady of Guadalupe appeared as the first mestiza, “a symbol of the inculturation of the Gospel, of which she has been the lodestar and the guide.” (Pope John Paul II, The Church in America, No. 70 ). 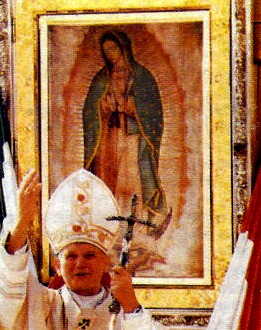 He also named Our Lady of Guadalupe as the Star of the New Evangelization. Evangelization is the proclamation of the Good News of Jesus Christ and it is closely linked to what the Church calls inculturation. Pope John Paul II said that inculturation “means the intimate transformation of authentic cultural values through their integration in Christianity and the insertion of Christianity in the various human cultures. The process is thus a profound and all-embracing one, which involves the Christian message and also the Church’s reflection and practice. But at the same time it is a difficult process, for it must in no way compromise the distinctiveness and integrity of the Christian faith.”

“Through inculturation,” he continued, “the Church makes the Gospel incarnate in different cultures and at the same time introduces peoples, together with their cultures, into her own community. She transmits to them her own values, at the same time taking the good elements that already exist in them and renewing them from within. Through inculturation the Church, for her part, becomes a more intelligible sign of what she is, and a more effective instrument of mission.” (Pope John Paul II, Mission of the Redeemer, No.52). Let us pray in hope that Our Lady of Guadalupe will intercede so that the Gospel will penetrate the hearts of the men and women of America and permeate the American culture, transforming it from within.

Our American Culture is the exhibition, through our behavior, of our beliefs, traditions and values. It includes our understanding of the meaning of man and God; the rights of God and those of men; and the role of the state and its powers. Our culture is influenced and passed on to others and new generations primarily by parents, church, education, laws, communications media and social interaction with others.

Unlike most cultures, America has foundational documents. The American Declaration of Independence and Constitution enable unity from many under God in whom we trust. Our traditional national motto is E Pluribus Unum (“Out of many, one”) that appears on our Great Seal along with Annuit cœptis (“He [God] approves the undertaking”). In 1956, Congress adopted “In God We Trust” as our official motto. Through reason alone, even without faith, God has enabled us to know that he has created us equal in dignity and has endowed humanity with natural rights and the freedom to exercise them without restraint by the state. Some of these rights are set forth in our Declaration of Independence. We should exercise these rights by the practice of virtue, doing good and avoiding evil, and without vice, so that our culture is supported by moral values.

The core of our culture is formed by values. These include judgments of good or evil that people make about certain human behaviors or state action. Our culture’s values are upside down. What was once judged as unquestionably evil, is now judged as socially good, to the extent that some of our politicians can say, “Abortion is not just a legal right, it is a social good.” The prophet Isaiah wrote, “Woe to those who call evil good and good evil.” (Isaiah 5:20). The Book of Sirach tells us, “Before man are life and death, good and evil, whichever he chooses shall be given him.” (Sirach 15:16).

Our culture has protected the extension of some of our liberties to the point of unrestrained license with the freedom to do as we choose and to call evil as good. Examples of these are the so-called “rights” invented by our courts of a mother to choose the abortion of her unborn child; and of people to choose prescribed suicide; to choose a same-sex person in an invented legal relationship and to choose a sex different from what God created them.

When there is no shared commitment to certain moral truths about the human person and human community, there is no moral consensus of the people regarding the good or evil of certain fundamental human behaviors or actions by the state and there is a division in the culture.

This was exemplified by the division of American culture on the issue of human slavery that led to the Civil War. The American culture of 2017 is divided by many moral issues and, because of a lack of moral consensus on these issues, families and friends are divided.

Abraham Lincoln once said, “Can we, as a nation, continue together permanently – forever half slave and half free?” 140 years later, Pope John Paul II said that Lincoln’s question is still a question for us today. Can we continue together permanently – forever half pro-abortion and half pro-life? “President Lincoln’s question is no less a question for the present generation of Americans. Democracy cannot be sustained without a shared commitment to certain moral truths about the human person and human community.” (Pope John Paul II, October 1995). He also said, “The condition for the survival of America is to respect every human person, especially the weakest and most defenseless ones, those as yet unborn.” (Pope John Paul II, September 19, 1987).

Part 2 will be published next week.