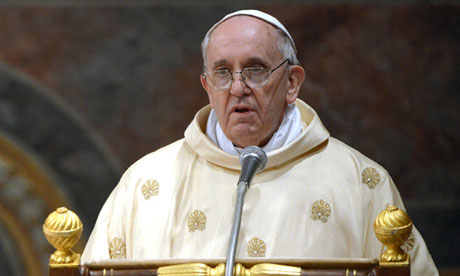 Pope Francis addressed the Council of the Bishops’ Conferences of Europe
on October 3. His unscripted off-the-cuff address was just released
yesterday by Vatican correspondent Sandro Magister. Our pope has firmly disabused anyone of the idea that he is not pro-life. The following is a part of his address.

Europe has discarded its children. A bit triumphantly. I
remember that when I was studying in one country the clinics that did
abortions then prepared everything to send it to cosmetic factories.
Makeup made with the blood of innocents. And this was something to brag
about, because it was progressive: the rights of the woman, the woman
has the right over her body.

I don’t know about here in Italy, I don’t want to say because I’m not
sure, but what will happen when the state is unable to pay the pensions,
because there aren’t enough young people working according to the law,
because there is that black market for labor that they do, not always
but… And the elderly – I’ve said this about Latin America, about my
country, but I believe it’s a universal problem or of many countries or
some other continents – the elderly are discarded with stealth euthanasia. The social services cover medical treatment up to a certain point, and then you’re on your own!

A Europe weary with disorientation. And I don’t want to be a pessimist,
but let’s tell the truth: after food, clothing, and medicine, what are
the most important expenditures? Cosmetics, and I don’t know how to say
this in Italian, but the “mascotas,” the little animals. They don’t have
children, but their affection goes to the little cat, to the little
dog. And this is the second expenditure after the three main ones. The
third is the whole industry to promote sexual pleasure. So it’s food, medicine, clothing, cosmetics, little animals, and the life of pleasure. Our young people feel this, they see this, they live this. …

Europe, return to Jesus! Return to that Jesus whom you have said was not in your roots! …

The Lord wants to save us. I believe this. This is our mission: to
proclaim Jesus Christ, without shame. And he is ready to open the doors
of his heart, because he manifests his omnipotence above all in mercy
and forgiveness.

Let’s go forward with preaching. Let’s not be ashamed. So many ways of preaching, but to
mama Europe — or grandma Europe, or wounded Europe — only Jesus
Christ can speak a word of salvation today. Only he can open a door of
escape.

You may read the Pope’s complete address here.