Home » Could President Trump Be Another Cyrus Part I

Could President Trump Be Another Cyrus Part I

Could President Trump Be Another Cyrus?
Part 1
Dan Lynch

Amidst the chaos of President Trump’s appointments and firings and, without any evidence of a crime, the allegations against him about Russian collusion in the Presidential election, it is hard to discern God’s hand in any of this. However, God can write straight with crooked lines and, despite the crooked lines of our President’s apparent character defects, nevertheless God can use him to write straight.

Like a pencil, President Trump may be an instrument in the hands of God. President Trump is certainly not a messianic savior figure, but could he be another Cyrus? Cyrus the Great returned the Jews from their Babylonian Captivity and helped them to rebuild their Temple and culture. Could President Trump return America and help to rebuild its foundational principles and a Culture of Life?

Cyrus the Great was the King of Persia. In 539 BC, he conquered the Babylonian Empire that had destroyed the first Temple in Jerusalem and that had brought the Jews from Jerusalem to captivity in Babylon. God chose Cyrus, who didn’t even know the one true God, to be the deliverer of the Jews from their 70 years of exile in the Babylonian Captivity. Cyrus enabled them to return to their homeland in Jerusalem and provided funds for them to rebuild their Temple and culture.

The book of Isaiah sets forth a prophecy about Cyrus, “Thus says the Lord to his anointed, to Cyrus, whose right hand I have grasped to subdue nations before him and strip kings of their robes, to open doors before him—and the gates shall not be closed. I will go before you and level the mountains, I will break in pieces the doors of bronze and cut through the bars of iron,  I will give you the treasures of darkness and riches hidden in secret places, so that you may know that it is I, the Lord, the God of Israel, who call you by your name.” (Isaiah 45:1-3).

The meaning of calling Cyrus “anointed” in the prophecy was not that he would be a messianic savior, but that God in his divine providence would choose him to be an instrument of his divine plan of deliverance of the Jews from their Babylonian Captivity. It did not mean that Cyrus was an especially holy or virtuous man, but that he would be God’s instrument whom God would lead to the victory of justice as a witness to all of the glory of God. Although Cyrus did not know God, God foreknew him and called him by name to deliver the Jews from their captivity and to help them to restore their Temple and culture. Could President Trump be another Cyrus? Could he help to deliver us from the captivity of our secular Culture of Death and restore us to a Culture of Life?

I know an American priest who was concerned about what kind of a President Donald Trump would be. His concerns were somewhat alleviated when he was contacted by a leader of a prayer group from Australia. The leader said that most of those in the prayer group had received in prayer the prophecy of Isaiah 45 and that God would raise up President Trump to be another Cyrus.

The priest was rather skeptical, but he tested God at a seminary that he visited. An open Bible was present in the foyer upon which he placed his finger without looking. He opened his eyes to see his finger pointing at Isaiah 45. Still somewhat skeptical, he visited another seminary. Again, he saw in the foyer another opened Bible upon which he again blindly placed his finger on what he saw again to be Isaiah 45! This was a confirmation of the message from the Australian prayer group leader.

In his first six months, President Trump has handpicked cabinet members who meet with him in a Cabinet Bible Study Group that will be explained in Part 2 of this article. He has appointed a pro-life United States Supreme Court Justice and other pro-life federal judges. He has ended federal funding for foreign abortions and continues to work towards defunding Planned Parenthood. Manufacturing, jobs and the economy are up while unemployment is down.

Another prophecy from the 1980s might help to confirm that perhaps God in his Divine Providence chose our President Trump to be an instrument of his divine plan of deliverance and saving justice from our Culture of Death with its atheism, secularism, socialism, sexualism, materialism, consumerism, sterilization, contraception, abortion, no-fault divorce, same-sex false marriage, so-called transgenderism, addictions, euthanasia and suicide. Perhaps President Trump may be instrumental in returning our country to its foundational principles and a Culture of Life.

1980s Hermit’s Prophecy about Donald Trump
Father Giacomo Capoverdi, an American priest, shares an amazing prophecy about Donald Trump in a video that Father Capoverdi produced. In his video he tells the story  about his encounter with Tom Zimmer, the Hermit of Loreto, At the site of the Holy House of the Blessed Virgin Mary in Loreto, Italy. Tom was born in America, but he lived a life of prayer and penance as a hermit for many years at Mary’s House. He joked that he had lived in Mary’s House longer than St. Joseph. In his video, Father Capoverdi relates that this hermit had prophesied all the way back in the 1980s that Donald Trump would lead America back to God.

“The millionaire playboy from New York?” asked an incredulous friend of Tom’s. “Yes,” responded Tom. In fact, Tom was so convinced that Donald Trump would become a great  leader of America that as an act of faith he wrote his name on a brick and had it placed in the 1980s inside St. Peter’s Holy Door in Rome in order that Mr. Trump would receive blessings from the many Masses that would be said there. 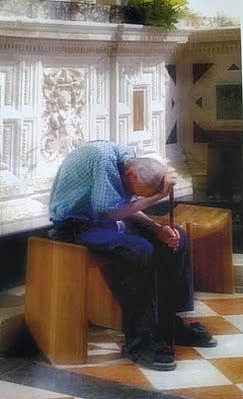 Holy Hermit Tom Zimmer at Mary’s House
Fr. Capoverdi said that he wanted to get this message out after he saw President Donald Trump’s wife Melania begin a political rally in Florida by praying the Our Father.

You may see Fr. Capoverdi’s video about the Holy Hermit here.

You may also read another article about the Holy Hermit here.


Let us pray the Novena that, through the intercession of Our Lady of America, God will bless America and us so that we might have true hope and change and return to our foundational principles with a Culture of Life.

To be continued in Part 2.