Home » Could President Trump Be Another Cyrus? Part 2

Could President Trump Be Another Cyrus? Part 2

Could President Trump Be Another Cyrus?
Part 2
Dan Lynch

Amidst the chaos of President Trump’s appointments and firings and, without any evidence of a crime, the allegations against him about Russian collusion in the Presidential election, it is hard to discern God’s hand in any of this. However, God can write straight with crooked lines and, despite the crooked lines of our President’s apparent character defects, nevertheless God can use him to write straight.

Like a pencil, President Trump may be an instrument in the hands of God. He is certainly not a messianic savior figure, but could he be another Cyrus? In 539 BC, Cyrus the Great returned the Jews from their Babylonian Captivity and helped them to rebuild their Temple and culture. Could President Trump return America and help to rebuild its foundational principles and a Culture of Life? This question is answered in Part 1 of this article that sets forth prophecies that President Trump may be an instrument of God. You may read it here.

This Part 2 sets forth what may be the beginning of the fulfillment of those prophecies. In his first six months, President Trump has handpicked cabinet members who meet with him in a Cabinet Bible Study Group. He has appointed a pro-life United States Supreme Court Justice and other pro-life federal judges. He has ended federal funding for foreign abortions and continues to work towards defunding Planned Parenthood. Manufacturing, jobs and the economy are up while unemployment is down.

President Trump’s Cabinet’s Bible Study
In what may be the first formal Bible study among executive Cabinet members in 100 years, some of the most powerful people in America have been gathering weekly for the Trump Cabinet Bible Study. 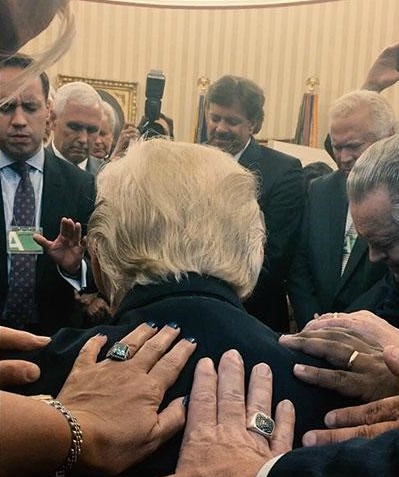 Faith Leaders Pray for Trump in Oval Office, Enjoy ‘Open Door’ at White House
Ralph Drollinger, founder of Capitol ministries, said, “These are godly individuals that God has risen to a position of prominence in our culture.” They’re all handpicked by President Donald Trump and Vice President Mike Pence.

Mr. Drollinger founded Capitol Ministries with the idea that if you change the hearts of lawmakers, then their Christian worldview would guide them to make good policies.

Mr. Drollinger said, “It’s the best Bible study that I’ve ever taught in my life.” You may read more here.

President Trump’s Letter to Catholics
Last October while I was at the Annual Catholic Leadership Conference, presidential candidate Donald Trump wrote us a letter. He wrote:

Please keep me and my family in your prayers.

God bless you and may God bless the United States of America.

Let us pray the Novena that, through the intercession of Our Lady of America, God will bless America and us so that we might have true hope and change and return to our foundational principles with a Culture of Life.