Home » Catholic Church: Where Are You Going?

Catholic Church: Where Are You Going?

A conference was held in Rome on April 7, called Catholic Church: Where Are You Going? Only a Blind Man Can Deny That There Is Great Confusion in the Church. Cardinals, bishops, priests and lay faithful issued a Declaration in which they testified to the Church’s unchanging teaching on marriage, the sacraments and absolute moral commandments. A contingent from the audience shouted out, “People of God, stand up! We are the ones who have to act!” 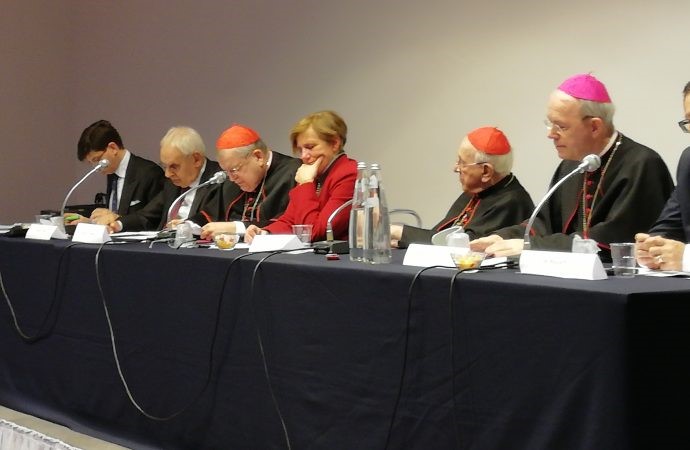 Two days before the conference, I wrote an article referencing the worldwide headline quoting Pope Francis saying, “There Is No Hell”.  I was moved to share my opinion and upset that the headline is the cause of scandal and that it was not denied by Pope Francis, the Vatican or both. I wrote that there should be an explanation of the true Church teaching that hell exists and unrepentant souls will be damned to hell for eternity.

On the same day that I wrote my article, Cardinal Raymond Burke made a statement and confirmed my statement. He called the Vatican’s response to the “scandalized reactions” from across the globe “highly inadequate,” because it failed to reassert the Church’s teaching on the immortality of the soul and the existence of hell. He said it also failed to state that Pope Francis repudiates the “erroneous and even heretical ideas” attributed to him.” Cardinal Burke continued,

It has been a source of profound scandal not only for many Catholics but also for many people in the secular world who have respect for the Catholic Church and its teachings, even if they do not share them.

This playing around with faith and doctrine, at the highest level of the Church, rightly leaves pastors and faithful scandalized.

Cardinal Burke added that the situation is further aggravated by the silence of so many bishops and cardinals, some of whom, he said, “pretend there is nothing serious going on.” You may read his full interview here.

I became acquainted with Cardinal (then Archbishop) Burke over 10 years ago when he began the construction of the Shrine of Our Lady of Guadalupe in La Crosse, Wisconsin. I was later invited to be a torchbearer in the opening procession for the dedication of the Shrine on July 31, 2008, an unforgettable moment. Cardinal Burke, an expert in canon law, was later appointed the Prefect of the Supreme Tribunal of the Apostolic Signatura, in simpler words the equivalent of the Chief Judge of the Vatican Supreme Court.

On September 29, 2015, a Filial Appeal signed by almost 800,000 Catholics, including 201 cardinals, archbishops and bishops, was submitted to Pope Francis. The Appeal called on the Pope to say “a clarifying word” regarding his document Amoris Laetitia (The Joy of Love), in order to dissipate the “widespread confusion arising from the possibility that a breach has been opened within the Church that would accept adultery—by permitting divorced and then civilly remarried Catholics to receive Holy Communion—and would virtually accept even homosexual unions when such practices are categorically condemned as being contrary to Divine and natural law.”

Exactly one year later, on September 29, 2016, Cardinal Burke and three other cardinals sent Pope Francis a Dubia (Latin for “doubts”). It was a series of questions to Pope Francis in the hope that his clarification would help to clear up “grave disorientation and great confusion” caused by key parts of his document Amoris Laetitia, particularly whether it is admissible to allow any divorced and civilly remarried persons (without an annulment and who are unwilling to live in continence) to receive Eucharistic Communion.

Almost a year later, on August 11, 2017, more than 60 Catholic researchers and scholars in various fields from twenty countries delivered a Filial Correction letter to Pope Francis. They alleged “heretical positions” that the Pope has “effectively upheld.”

They also alleged that Pope Francis through Amoris Laetitia and in “other words, deeds and omissions of Your Holiness,” had made a “propagation of heresies” that must be addressed concerning “marriage, the moral life, and the reception of the sacraments.”

They additionally noted that Pope Francis had not answered the Dubia questions regarding ambiguous or unclear sections of Amoris Laetitia, which was sent to him in 2016.

The Filial Correction charged that bishops are teaching that divorced and remarried couples can sacrilegiously receive Holy Communion, because of the Pope’s actions.

Sadly, Pope Francis did not acknowledge, deny, clarify or answer any of the appeals to him through the Dubia, the Filial Appeal or the Filial Correction.

The Catholic Church: Where Are You Going? conference issued a Final Declaration that stated, “We are convinced that persons who are divorced and civilly remarried, and who are unwilling to live in continence, are living in a situation that is objectively contrary to the law of God, and therefore cannot receive Eucharistic Communion.”

At the conference, Cardinal Walter Brandmüller, former president of the Pontifical Committee for Historical Sciences, said that the faithful not only have the “right of free speech” in the Church, based on “the sense of faith and love,” but also that they – according to their knowledge, responsibility, and prominent positions – “sometimes even have the duty to communicate [their opinion] to their spiritual shepherds when it is about the well-being of the Church.” He therefore concludes, “It would be time for the Magisterium to pay appropriate attention to this witness of Faith.” Read more here.

I am calling upon all faithful Catholics to make a Pledge and Petition to pray at least one rosary per week, through the intercession of Our Lady of Guadalupe named Protector of the Pontiff by Pope Benedict XV, for the intention that the truths listed in the Pledge be affirmed, supported, obeyed and taught by priests, bishops and the Pope, and all religious and laypeople united in the one, true, holy and apostolic Catholic faith and to petition them to do so.

MAKE YOUR PLEDGE AND PETITION HERE