Call upon St. Michael the Archangel

While the children were praying, they saw St. Michael the Archangel above them. He was holding in his left hand a chalice and over it, in the air, was a host from which drops of blood fell into the chalice. St. Michael then left the chalice in the air, knelt near them prostrate in adoration of Jesus and prayed the following prayer:

Most Holy Trinity, Father, Son and Holy Spirit, I adore You profoundly, and I offer You the Most Precious Body, Blood, Soul and Divinity of Jesus Christ, present in all the tabernacles of the world, in reparation for the outrages, sacrileges and indifferences by which He is offended. And by the infinite merits of His most Sacred Heart and the Immaculate Heart of Mary, I beg the conversion of poor sinners. 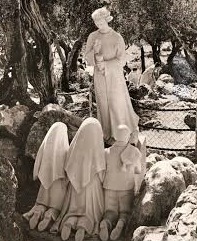 After that St. Michael arose and again took in his hand the chalice and the host. Then he gave the host to Lucia and the contents of the chalice to Jacinta and Francisco, saying at the same time:

Eat and drink the Body and Blood of Jesus Christ terribly outraged by the ingratitude of men. Offer reparation for their sakes and console God.

St. Michael the Archangel and Jesus King of All Nations

Similar to his apparitions at Fatima, St. Michael the Archangel appeared to Jesus’ Secretary, the mystic of the Jesus King of All Nations Devotion. St. Michael said that it was “the Most Holy Will of God that a medal be made in particular honor of me as the Protector of the Church of Christ on earth” (Journal 79) and “as a reminder that the Most High has appointed me a particular Guardian of His Church and of the Most Blessed Sacrament.” (Journal 85). 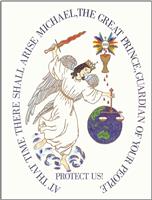 The image of St. Michael is on the reverse (back) side of the medal. He was sent by Jesus to His Secretary many times to show her how he wished to appear with our Eucharistic Jesus on the medal. St. Michael appeared in flight enveloped in glory with a fiery sword in his right hand raised above his head.

To the right of St. Michael above his head appeared the Sacred Host with the letters “IHS” with a small cross above them. “IHS” is the monogram derived from the Greek word for Jesus. As at Fatima, drops of the Most Precious Blood dripped from the Sacred Host into a chalice below symbolizing His constant stream of Mercy. (Journal 106-107). See his image here.

St. Michael told Jesus’ Secretary, “Let souls turn to me for renewed devotion to Our Lord in this Blessed Sacrament! He must be properly adored, loved, thanked, praised and worshiped in this the Most Glorious Sacrament. Let souls call upon me whenever sacrileges and abominations are being committed against the Most High God in this Sacrament of His Love. I promise to put to flight His every enemy. GREAT is my zeal for the glory of God!” (Journal 86).

It was revealed that around the medal’s border should appear the words “At that time there shall arise Michael, the Great Prince, Guardian of Your People” (Dn. 12:1) (Journal 88) and beneath his feet, the words, “Protect Us!” (Journal 107).

St. Michael promised “to obtain for those faithful Catholic souls who faithfully wear this medal honoring the Most High God, as ‘Jesus King of All Nations’ the reverse of which bears my image, the beautiful grace of an angelic escort to the table of the Lord Jesus Christ. I, myself, will accompany these souls who approach Our Lord in Holy Communion, with reverence, faith and LOVE. I will bear the souls upon my hands. I will watch over them with a most special vigilance. I will be their special protector in their journey towards eternity. Let the faithful approach Our Lord in the Most Blessed Sacrament with love, devotion and reverence.” (Journal 175).

St. Michael also promised, “One of the most beautiful graces Almighty God shall grant to the faithful wearing of this medal, is that I, myself, will obtain these souls the grace of coming to the belief of the Divine Truth of the Real Presence of Jesus Christ, the God-Man, in the Most Blessed Sacrament.” (Journal 178).

Jesus King of All Nations said, “I most particularly Reign in the Most Holy Eucharist, and in loving hearts that receive Me as their God and Savior.” (Journal 197).

Sacrilege consists in profaning or treating unworthily the sacraments and other liturgical actions, as well as persons, things, or places consecrated to God. Sacrilege is a grave sin especially when committed against the Eucharist, for in this sacrament the true Body of Christ is made substantially present for us. (Catechism of the Catholic Church, 2120).

Many communions received by Catholics in sexual relationships are sacrilegious communions. These people include the married who practice contraception without any intention of being open to new life; the unmarried; the civilly divorced and remarried without an annulment; and people in same sex relationships; who continue to practice objective sexual mortal sins without any intention of abstaining from them. Nearly 70 percent of Catholic women use sterilization, the birth control pill or an IUD, according to the Guttmacher Institute research. Only 2 percent of Catholic women, even those who regularly attend church, rely on natural family planning. Many Catholic men support their wive’s contraceptive use or are themselves sterilized or use contraceptives.

Many other sacrilegious communions are received by public figures who support and promote abortion and/or same-sex legal relationships; Satanists who steal and abuse the sacred hosts in satanic rituals and other people in a state of mortal sin.

Most Catholics receive the Eucharist every Sunday, but very few go to Confession. Many are in the state of mortal sin. Many of them may be ignorant of their grave sins because they have not been properly taught. However, many others are not ignorant, know their sinful state, do not intend to amend it and still continue to receive sacrilegious communions.

Many priests, bishops and Cardinals throughout the world have counseled some of these types of people that they may discern that they may be admitted to and receive Holy Communion without conversion, Confession and a firm purpose of amendment. Many priests, bishops and Cardinals are now interpreting Pope Francis’ Apostolic Exhortation, Joy of Love, to allow this as well. This will only increase sacrilegious communions, weaken the Church and may bring judgment and death upon the recipients of such communions.

St. Paul wrote, “Whoever eats the bread or drinks the cup of the Lord unworthily sins against the body and blood of the Lord…. That is why many among you are sick and infirm, and why so many are dying. If we were to examine ourselves, we would not be falling under judgment in this way.” (1 Cor. 11, 27-31; Catechism of the Catholic Church, 1385). St. John Paul II reaffirmed this teaching in his Apostolic Letter, The Church of the Eucharist, 36.

As St. Michael counseled, we should call upon him “whenever sacrileges are being committed against the Most High God in the sacrament of His love.” The sacrament that he refers to is the Eucharist and one of the greatest sacrileges against it is the reception of the Eucharist by those in the state of mortal sin.

What Can You Do About These Sacrilegious Communions?

On behalf of Jesus King of All Nations, let us pray that all priests accompany those receiving sacrilegious communions on the road to repentance, conversion and Confession and to encourage them to follow the clear teachings of the Church to refrain and abstain from the sexual acts of adultery, fornication, contraception; homosexuality and from public scandal and then happily receive the sacrament of the Eucharist.

If they have no intention to do so, they should be encouraged to attend Mass to hear the word of God and to receive a blessing and to share in the life of the Church and receive all of its assistance to grow in holiness, except for the reception of the Eucharist until their repentance, conversion and Confession with a firm purpose of amendment.

Jesus said, “My daughter, It is My Most Holy Will and desire that there be a medal struck according to the likeness of Me you have seen. I promise to offer the precious grace of final perseverance to every soul who will faithfully embrace this devotion.” (Journal 75). Jesus also gave us the great gift of His medal for our protection.

The image of St. Michael the Archangel is on the reverse side of the medal.

The image of St. Michael the Archangel is on the reverse (back) side of the medal. His left hand held a pair of scales over the earth representing justice. (See Wis. 1:15) St. Michael is believed to carry the souls of all the deceased where they are judged and symbolically weighed in his perfectly balanced scales.


On his DVD, Dan Lynch explains the image, the medal and the promises and messages of St. Michael the Archangel from the Jesus King of All Nations Devotion.

St. Michael said, “I promise to those souls who embrace this devotion and invoke me under my title of Protector of the Church of Christ on Earth, protection from the enemy during life and especially at the hour of their death when the assaults of the enemy are most violent.”

“These revelations are very important. America is honored by their being given here because they not only apply to us, our nation, but to all the world. They are aimed at the universal restoration of Christ as King of All Nations, and more proximately, to prepare the way for His welcome at His Coming. I urge all to secure the publications of the Jesus King of All Nations Devotion and to respond to and spread the messages.” – Michael the Archangel, Rev. Albert J. Hebert

On his CD, Dan Lynch explains the apparitions of St. Michael the Archangel throughout history, and his medal, promises and messages from the Jesus King of All Nations Devotion.