“Today the Church needs saints. This calls for our combating our attachment to comforts that lead us to choose a comfortable and insignificant mediocrity. Each one of us has the possibility to be a saint, and the way to holiness is prayer. Holiness is, for each of us, a simple duty.”
St. Mother Teresa

July 1 is the feast of one of our saints of the states, St. Junipero Serra. Let our nation turn its lonely eyes to him for courage and hope. Pope Francis canonized him on September 23, 2015 during his visit to Washington, D.C. St. Serra is the United States’ first Hispanic saint.

In 1750, at the age of 36, Franciscan Father Serra gave up his comfortable teaching services in Spain and volunteered to serve the Franciscan missions in the New World. He left Cadiz, Spain and sailed for Vera Cruz, Mexico. From there he walked for 24 days by foot to Mexico City and dedicated his mission vocation to Our Lady of Guadalupe at her shrine. He spent nine years preaching and ministering in Mexico. 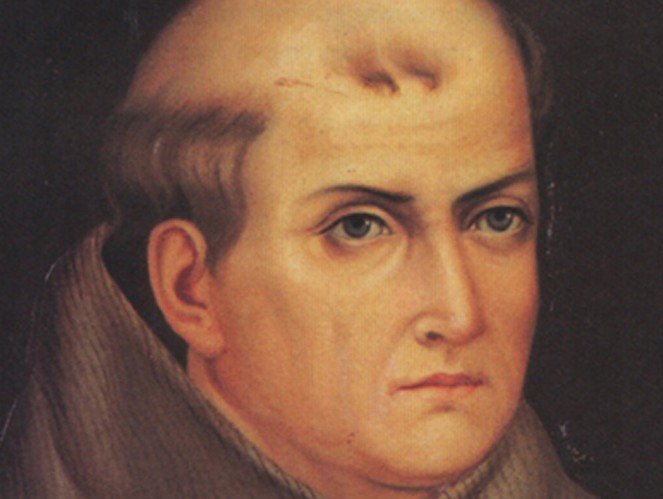 England and Russia soon began to explore the Pacific coast from the north. So, Spain wanted to gain a foothold from the south in California. In 1769, a Spanish expedition was organized under Gaspar de Portola. At the age of 56, Father Serra accompanied the expedition to San Diego, California, where he planted the Cross and established his first mission.

From San Diego, he walked hundreds of miles while suffering from asthma and a chronically sore and painful leg. He established nine missions up and down the Pacific coast of California in 15 years between 1769 and his death in 1784. He established missions in San Diego, San Luis Obispo, Santa Clara, San Francisco and other places along the California coastline over a distance of 700 miles.

In April of 1770, at Monterey, he and Gaspar de Portola took possession of California for the king of Spain. In addition, Father Serra claimed Monterey for the King of Heaven. He rang a bell that he hung from a tree and shouted out to the Indians, “Come, Gentiles! Come to the Holy Church. Come and receive the faith of Jesus Christ!” He battled governors, bureaucrats, and military commanders to secure a system of laws to protect the California Indians from injustices by the Spanish soldiers.

Father Serra had extraordinary administrative abilities. In four short years, he settled and organized a functioning frontier through missions. He had to house and feed the residents of the missions. To do this he had to secure from the Spanish government food, grain and plant seeds, tools, supplies, horses, mules and wagons, cows and other animals. It was a huge task.

The California missions were permanent structured communities where the Indians could live in peace. They were sheltered and protected from their enemies. They learned the Catholic faith; singing and the playing of musical instruments and techniques for farming and crafts. Father Serra introduced agriculture and irrigation systems and created a network of roads. He helped the Indians to develop from hunters to farmers, from illiteracy to learning and from using primitive tools to the tools of the trade of carpenters and blacksmiths.

Father Serra baptized approximately 6,000 Indians, about ten percent of the entire native population at the nine missions that he founded. He reported that “when we came not a Christian existed here. We regenerated all in Christ; and we have come and we are all here for their welfare and salvation. At all events, I believe it is well known that we love them.”

Father Serra died from tuberculosis on August 28, 1784 at the age of 70. He had traveled a distance of over 5000 miles by land on foot or animal. St. John Paul II beatified him on September 25, 1988. His Feast Day is July 1. In recognition of his achievements, a statue of Father Serra was placed in Statuary Hall in the foyer of the United States Capitol in Washington, D.C.

Many of our supporters take well-deserved summer vacations, which causes our support to reach its lowest levels of the year.

So, we would really appreciate your help to keep our Missionary Images of Our Lady of Guadalupe, Jesus King of All Nations and Our Lady of America on their Visitations throughout America.

But, in order to continue this amazing work for the greater glory of God, we must raise $90,735 by the Feast of St. Michael the Archangel, September 29. This is just for our normal quarterly operating expenses of maintaining our Apostolates’ Center and paying our modest salaries. There is no surplus in our budget, which does not include any special projects, needs, or savings.

Please send whatever you can afford. As Our Lady of Guadalupe said to St. Juan Diego: “Do the best that you can!”

Every gift no matter how large or small is appreciated.

One of our supporters wrote, “Bless you for all of your hard work in arranging Visitations of your Images which you sacrifice for the world!”

Don’t forget, we remember you. Our benefactors receive the following spiritual benefits from our Apostolates: our intercession for your Prayer Petitions (click here to make your Prayer Petitions) in our daily Chaplets; in our Rosaries and perpetual Novenas; in our weekly Holy Hour before the Blessed Sacrament and in our special monthly Masses for your intentions. Thank you for your donation today!

Thank you for remembering us.

Please click here to learn how your donations support our mission.

To learn more about St. Junipero Serra and all of the American Saints and Blesseds, you may read my book, Saints of the States. You may order it by clicking here.

St. John Paul II requested this book. He said we need, “a collection of short biographies of the Saints and the Beatified of America, which can shed light on and stimulate the response to the universal call to holiness in America.” (Pope John Paul II, The Church in America).