Bonnie Engstrom asked for help from Archbishop Fulton J. Sheen as she watched lifesaving measures being taken for her son, who had been born at home just moments before without a pulse or drawing breath.

After 61 minutes, just as emergency room personnel were about to pronounce him dead, he began to breathe and his heart rate shot up to a normal level for a newborn. Despite a dire prognosis for his future, the boy has thrived and is now a healthy 8-year-old who likes chicken nuggets, Star Wars and riding his bicycle.

On July 5, Pope Francis formally approved this as a miracle attributed to the intercession of American Archbishop Sheen. (May 8, 1895 – December 9, 1979). 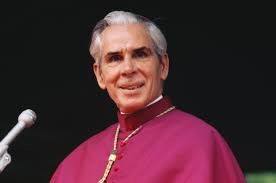 Bonnie Engstrom said that she had a “beautifully easy” pregnancy and that both she and her baby had been healthy. As they prepared to welcome her baby into their family, Bonnie said, “I started asking, basically on a daily basis, for Fulton Sheen’s prayers, for his intercession in the life of my child and in our marriage — to walk with us and to walk with my son, that he would be a lifelong Catholic who would love God and love his faith, that he would be a man of integrity. I was asking him to intercede every day while I was pregnant.”

Bonnie said that she and her husband Travis had been “watching YouTube videos of Bishop Sheen preaching. We were so impressed — he’s funny, he’s smart, and he’s just so approachable and warm. We were just so engaged with him.”

In the 1950s, Archbishop Fulton Sheen was a world-famous television pioneer who hosted his own show, Life Is Worth Living. The Engstroms knew that his cause for canonization as a saint was being sponsored by the Diocese of Peoria where they lived, so they decided that if their unborn child was a boy, they would name him James Fulton in honor of the Archbishop.

During Bonnie’s labor, a rare true knot formed in James Fulton’s umbilical cord and tightened. He was born blue and lifeless on September 16, 2010.

The Engstroms were told James Fulton would probably be blind and never walk, talk or be able to feed himself. However, in the days and weeks that followed he defied them all and continued to make progress.

In September 2011, the Diocese of Peoria initiated an investigation into the events of James Fulton’s recovery. They heard testimony from family members, first responders, doctors, nurses and others present at his birth. Each testified that there was no medical explanation for the infant’s recovery. Seven medical experts advising the Vatican Congregation unanimously approved the miracle.

This miracle has paved the way for Archbishop Sheen’s beatification ceremony in the near future. He needs one more approved miracle attributed to his intercession for his canonization as a saint.

To learn more about other great Saints of the United States, you can read my book, Saints of the States. Please click here to see it and get 20% off at checkout by entering 20OFF in the Discount box.
{module_contentholder,47600}