“Today the Church needs saints. This calls for our combating our attachment to comforts that lead us to choose a comfortable and insignificant mediocrity. Each one of us has the possibility to be a saint, and the way to holiness is prayer. Holiness is, for each of us, a simple duty.”  St. Mother Teresa.

On January 5 we celebrate the feast of Bishop St. John Neumann. He was born in Czechoslovakia in 1811 and raised in a German family that prayed daily morning and evening prayers together with the Rosary. His mother attended daily Mass and gave alms of food and clothing to her poorer neighbors. He had a good example of family prayer and charity. He completed his seminary education but was not ordained because they had no need of priests! 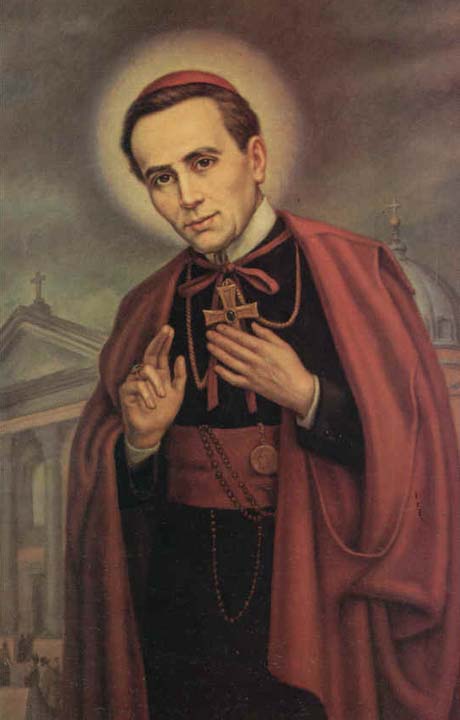 John abandoned himself to Divine Providence and left for America on February 8, 1836. He only told a sister that he was leaving and left a letter for his parents. He left for America with about $40 in his pockets without knowing where he would undertake his missionary service or who would ordain him as a priest.

The voyage lasted 40 days and he arrived alone in New York – a new and strange world, unfamiliar with the language, in tattered clothes, with one dollar, unexpected and nervously apprehensive about his uncertain future at the age of 25.

He walked the mile-long streets of the city until evening. The next day, John found his way to the residence of Bishop Dubois. He said, “I can and must ordain you quickly, for I need you.”  Bishop Dubois’ diocese covered the entire state of New York and part of New Jersey and he had only 36 priests to serve 200,000 Catholics. He had a great need for German priests because of the language barrier that faced the great influx of German immigrants who settled there. John was so thankful that he promised the Blessed Virgin Mary that he would say a daily Rosary in thanksgiving for the rest of his life.

Two weeks later, Father John was on his way to Buffalo, New York. The vast “parish” of Buffalo was spread over 900 square miles from Lake Ontario south to Pennsylvania. There was only one priest to serve all off the Catholics scattered throughout this broad frontier area.

Father John taught the children the catechism, prayed the Divine Office, celebrated Mass, administered the sacraments, and mediated disputes among parishioners. His fervent prayers for conversions were productive of a rich harvest of souls. His Journal tells of whole families under instruction, either for Baptism or reception into the Church.

He tirelessly traveled his parish in his zeal for the salvation of the souls of his parishioners, walking and riding over muddy and rutty roads, through swamps and uncut forests, by day and by night, in the summer heat and winter cold. On he went from village to village, cabin to cabin, and church to church. On his back he carried an altar stone, vessels, vestments and books.

Father John labored on the Buffalo frontier for four years, but in 1840 he suffered a complete breakdown in health. It took him three months to recover during which he agonized over his vocation. He yearned for spiritual advice and companionship. In spite of all his accomplishments, all his prayers and penances, he was convinced that he was but a wretched sinner, isolated and alone without any guidance. He even suffered from temptations of running away.

So, Father John joined the Congregation of the Most Holy Redeemer, popularly called the Redemptorists. He came to feel that he might be more effective in nourishing the spiritual life of the people if he were a member of a religious community rather than a lone missionary-pastor.

Father John was so alarmed over the prospect of being made a Bishop that he wrote to the Procurator General of the Congregation in Rome, urging him to use all power within his means to prevent the appointment. He begged friends to pray against his consecration and asked religious houses to pray novenas to avert what he termed as “a great danger from one of the dioceses in America” and “a calamity for the Church.”

However, the prayers were not heard and Pope Pius IX appointed Father Neumann as Bishop “under obedience and without appeal.”

Soon after his arrival in Philadelphia, Bishop Neumann got to work. He had taken a vow never deliberately to waste a moment of time. But his work was a fruit of an intense interior life of prayer and sacrifice. He rose before 5 am and prayed until Mass at six immediately followed by another and then hearing confessions and a light breakfast before the work of the day.

His room was simple and he often slept on the bare floor. He had only one suit of clothes. He wore a cilicium (belt of iron wire) under his clothes as a mortification of his flesh. His residence was furnished very plainly. He maintained no secretarial staff. Instead, he personally answered all the voluminous correspondence that  arrived on his desk. Visitors at all times of the day called and were graciously received by the Bishop himself.

Bishop Neumann believed that only Catholic schools could save the Catholic youth. He was critical of public education and wrote years earlier, “The public school system in the United States is very liberal in theory; but in reality it is most intolerant towards Catholics. It cannot be doubted that the young mind is influenced by the irreligious dispositions of the teacher. Even the textbooks selected for use are injurious to Catholic children.”

Bishop Neumann’s first project was the establishment of a Catholic school system in 1852. Within three years of his arrival, the number of children in Catholic schools increased from about 500 to 5000. He was the Father of the Catholic Parochial School System. He built 40 new schools and 80 new churches – almost one church for every month of his service.

On January 5, 1860, he remarked to a visiting priest, “I have a strange feeling today. I feel as I never felt before. I have to go out on a little business and the fresh air will do me good.”  Then he added strangely, “A man must always be ready, for death comes when and where God wills it.” Then he went for a walk, collapsed and died on the sidewalk, three months short of his 49th birthday.

Pope Paul VI canonized Bishop Neumann on June 19, 1977. His feast day is January 5, the anniversary of his death.

You may read the full story of his life in my book Saints of the States. You may order it by clicking here.