Home » 24th Anniversary of Crowning Our Lady as Queen of Russia

24th Anniversary of Crowning Our Lady as Queen of Russia

Today, October 19, the Feast of the United States Martyrs, is the 24th
anniversary of the crowning of the International Pilgrim Virgin Statue
of Our Lady of Fatima as Queen of Russia in Red Square, Moscow, Russia.

In October of 1992, I was helping to lead a pilgrimage of almost 1000
American pilgrims flying on two 747 jumbo jet airplanes. We flew from
the Fatima Shrine in Portugal and arrived in Moscow on October 16, the
75th anniversary of the founding of the Knights of the Immaculata by St. Maximilian Kolbe.

While St. Maximilian was in Rome in 1917, the year of the beginning of
the Russian Communist Revolution, the Freemasons celebrated their second
centenary. They made Rome the center of their sacrilegious
demonstrations. They marched to St. Peter’s where they displayed their
blasphemous banners. One said, “Satan must reign in the Vatican. The
Pope will be his slave.”

This
inspired St. Maximilian to found the Knights in order, as he said, “to
build a trench and personally hurl back the assaults of the foe.” He
prophesied, “One day, you will see the statue of the Immaculata in the
center of Moscow atop the Kremlin!” We fulfilled this prophecy as we
brought the statue of Our Lady of Fatima, the Immaculata, to the center
of Moscow.


Around 11:30 PM on October 18, many of the pilgrims, including John
Haffert, co-founder of the Blue Army and World Apostolate of Fatima, and
Pope John Paul II’s friend, Bishop Paulo Hnilica, gathered with me
outside Red Square. I entered the darkened Square, scouted out the area
and looked for any police.

There was only one police car parked near the Square and some soldiers
guarding Lenin’s tomb. I decided to lead the pilgrims to Lenin’s tomb in
reparation for his bringing of atheistic communism to Russia and the
millions of innocents that were killed because of it. 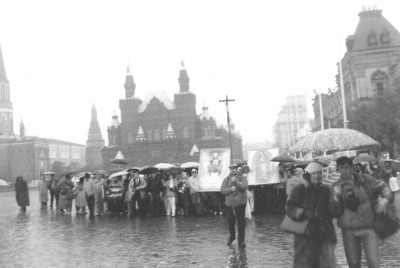 I
carried a large crucifix on a tall pole and led the pilgrims and the
Fatima statue across Red Square. We sang hymns in the pouring rain as we
processed to the tomb of Lenin. We stopped about 10 yards in front of
the tomb and its soldiers. We began to pray the Rosary and soon the
tower clock struck midnight.

Bishop
Hnilica said that it was time to interrupt the Rosary and to crown the
Fatima statue. A few minutes later, now on October 19, a 14-year-old
Russian girl, who had just been baptized two weeks before, was chosen to
crown the statue.

As the young girl crowned the statue, the soldiers changed their guard
(as if symbolizing a change for Russia), a pink dawn appeared in the
mid-night sky (as if  symbolizing a new day for Russia), and the rain
miraculously stopped above us, but continued around us as if we were in a
dry eye of a rainstorm!

Bishop Hnilica said, “I was here eight years ago and saw a huge banner
hanging over Red Square proclaiming, ‘Communism Has Triumphed!’ ”

“But now, that banner is down!; the Soviet Union is down!; Communism is
down!; Our Lady has been crowned as Queen of Russia and the Triumph of
the Immaculate Heart of Mary has begun!”